“Leave the astronauts out of it, or the paratroop teams that free-fall for 10,000 feet…Leave out the six people who have survived the 220-foot fall from the Golden Gate Bridge, and the divers of Acapulco, who swan dive 118 feet…Leave out even the ordinary high diver,” writes Edward Hoagland to begin a classic Sports Illustrated essay.  In “A Low Water Man” he wants us to, “Come down from such lofty characters to Henri LaMothe—who on his seventieth birthday…dove from a 40-foot ladder into a play pool of water 12 inches deep.” 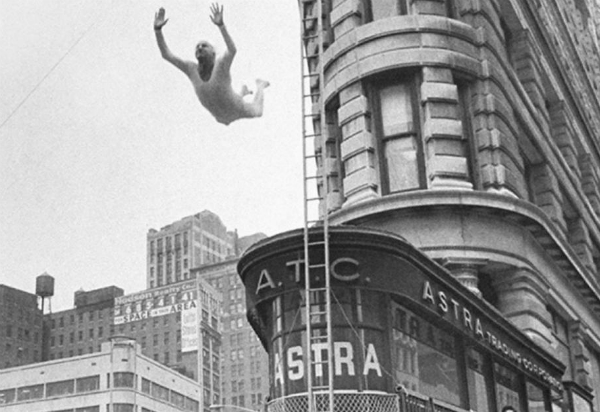 The essay is full of quirky facts about LaMothe, a Chicagoan: his association with the Art Institute, how he got his nickname—Frenchy—how he quit jobs so he could be a full-time competitive Charleston dancer, etc., but no fact is stranger than his explanation of the essential technique of diving from higher and higher heights into shallower and shallower pools of water.  Counter-intuitively you survive by sticking your vitals—your stomach and genitals—out, flying spread-eagle, back arched, stomach bowed downward, looking a bit frog-like as you do the biggest belly flop in history.  His eventual goal, to jump from 50-feet into a 6-inch kiddie pool with break-away sides, creating the illusion of diving into nothing at all.  I don’t know of any actual videos of LaMothe, but others—imitators all, I presume—have since taken LaMothe’s lead.  You can watch one—Professor Splash—explain the technique then dive 35-feet into a shallow pool as the audience explodes into gasps of disbelief, then applause. 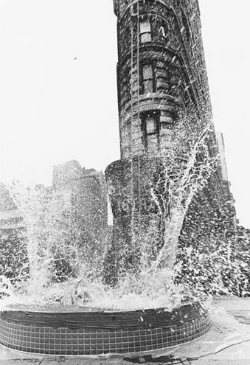 The end of the LaMothe dive pictured above.

In my first piece on a Hoagland essay—his classic “The Courage of Turtles“—I speak about a tension central to nearly all of Hoagland’s greatest essays, the tension between Connection and Disconnection.  I imagine it would be hard not to gasp at LaMothe’s feat, but because of this Connection-Disconnection theme Hoagland downplays any applause there might have been.  “A Low Water Man” ends this way:

“Since the death wish of a daredevil who is seventy years old must be fairly well under control, perhaps the best explanation for why he continues is that this is what he is good at.  Humiliation is a very good school for clowns, and, watching him, as with certain other notable clowns, one is swept with a tenderness for him as he lands, God’s Fool, safe and sound and alive once again.  As with them, our fascination is enhanced because at the  time he has sought our applause, he has seemed to try to obscure our appreciation, make the venture difficult for us to understand, and thereby escape our applause—a ‘low water man.'”

Connection-Disconnection centers most of Hoagland’s greatest essays in ways I allude to in “The Courage of Turtles.”  Also, as I say there, it is no more central and moving than in “Threshold and the Jolt of Pain,” where Hoagland also explains how this theme is deeply rooted in his own being.

♦  Go to the Lead Post in The Arts of the Essay, and to articles on Hoagland’s “The Courage of Turtles,” “Dogs and the Tug of Life,” “Threshold and the Jolt of Pain.”

This entry was posted in Writing and tagged A Low Water Man, Edward Hoagland, Henri LaMothe, Professor Splash, The Arts of the Essay. Bookmark the permalink.