A “Sleeping Beauty” To Stabilize a Neighborhood 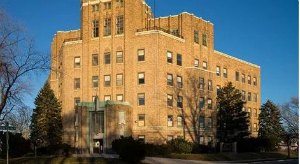 The old St. Charles Hospital on New York St. in Aurora had been vacant since 2010, ironically the year it was named to the National Register of Historic Places.  Then in early 2016 Mayor Tom Weisner put together a team to bring the historic art deco building back to life. The project was shepherded through the city ranks by Rick Guzman, assistant chief of staff.  David Block, director of development for Evergreen Real Estate Group, praised Guzman, saying he “has been a testament to the way this project has worked from the very beginning.”  That is: collaboratively, with many entities coming together in complex, complementary ways.  Rick Guzman, running for Aurora mayor this year (go to the Guzman for Aurora website and see the link below), is the only candidate who has demonstrated the ability to understand and lead people through such complexities that help turn visions into realities.

Steve Lord, writing in the Aurora Beacon-News reports that, “Block remembered how many wondered if the vision he had for renovating the building really was clear… ‘Maybe it’s because I’m an architect, but I like walking through creepy old buildings,’ he said. ‘There were puddles of water on the floors, and you could hear the dripping of water leaking in from the roof. There were creaking noises, because windows were open and the wind was blowing pieces around…There was a hallway that had an abandoned wheelchair in it, turned in just that horror movie kind of way…outside, there was a doll’s head, just sitting there.’”

Now the $24 million dollar project has turned the crumbling building into beautiful and much-needed senior housing.  “The rehabilitation project has,” says Guzman, “restored an historic building to the requirements of the National Register, created 60 construction jobs for local companies, and will help stabilize an economically distressed neighborhood.” Already the pride of that neighborhood, McCarty-Burlington, is palpable.  “Everybody was so, so happy,” said Ald. Juany Garza, in whose ward it is. “This is a gem. It’s so beautiful, and it’s in our neighborhood.”

Designed by Wybe J. Van der Meer, the former hospital was completed in 1932.  It’s rehab was a private-public partnership, the kind which interim mayor Bob O’Connor calls “the wave of the future.”

It required putting together a multi-layered mix of funding and tax credits.  Lord reports that “the financing and tax credits for the project were cobbled together by a collaborative effort from Seize the Future Development Foundation, the Northern Lights Development Corporation, Verigreen Development and Mayor Tom Weisner’s office…Evergreen Real Estate Group collaborated with Invest Aurora, the Northern Lights Development Corporation, the city of Aurora, the Illinois Housing Development Authority and the Illinois Department of Commerce and Economic Opportunity, along with several private lenders and investors…to fund the $24 million rehabilitation…About $3 million was obtained through the River Edge Redevelopment Zone program, created in 2006 to spur riverfront development in several Illinois cities…The balance of the project’s development 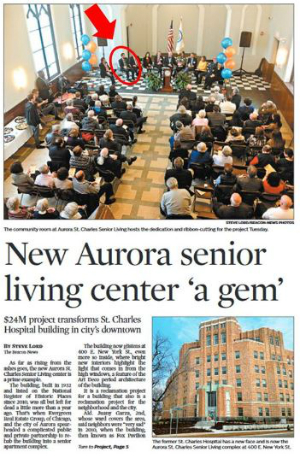 cost was covered by a combination of federal historic tax credits and low-income housing tax credits allocated by the state and private financing… ‘Our extensive knowledge of available tax credits and alternative forms of financing allowed us to move forward with a project that otherwise would not have been feasible,’ said Block. ‘It’s a true public-private partnership that shows what can be accomplished when various stakeholders in a community work together toward a common goal.’”

The timing had to be just right, too.  It depended upon Verigreen Development getting all work done before the end of 2016 or else certain tax credits would have expired.  “At that point,” Guzman said, “The rest of the $16 million in private funding also would likely be lost.”  But it wasn’t and the first residents started moving in in December.  Of the picture to the left—the one with the arrow pointing to Guzman at the opening ceremonies—Rick said, “This might have been the 8th or 9th time the story made the front page of the Beacon-News.”  And why not?  In the end, it costed tax payers virtually nothing—not a miracle, but the result of intelligent, complex financing.  And Mayor Weisner, who had always seen the building as a “Sleeping Beauty,” saw it experience a kind of fairy tale ending.

♦  Go to the Lead Post on this site for more on Rick Guzman’s mayoral run.

This entry was posted in Social Change and tagged Guzman for Aurora, Mayor Tom Weisner, Rick Guzman. Bookmark the permalink.