Like many Americans of his age, the painter Thomas Hart Benton (1889-1975) spent much time obsessing about how the new Age of the Machine, epitomized by trains, was colliding with the passing of what could be called the Age of Natural Muscle.  In the mid-30’s he was America’s most famous painter, one of the few painters ever on the cover of Time magazine, and as New York Times critic Holland Carter recently wrote, a “purveyor of muscular scenes of American life.” 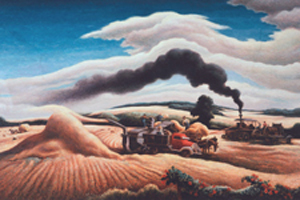 Sometimes, as in the 1938 painting “Threshing Wheat” (left), the the farm machinery seems to co-exist peacefully with the farmers and horses, merely making agriculture more progressive and productive.  Still the horses seem to bow in acquiesence, and the steam from the tractor and combine, though it flows in perfect unison with the clouds, is black.  It comes between the blue and white of the natural sky, threatening to cut the land off from its source of rain and sun. 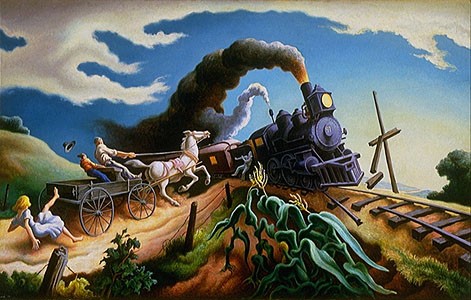 In 1943’s “The Wreck of the Ole ’97” (above), hopes of a peaceful co-exist are gone, horses and people thrown by the out-of-control train, an image made even more moving and relevant by the tragic events this July 2013 in the small eastern Quebec town of Lac-Magentic.  There a runaway train filled with pressurized fuels derailed and exploded. Twenty people are presently known dead, another 40 to 60 missing and presumed so, and the historic town center wiped out 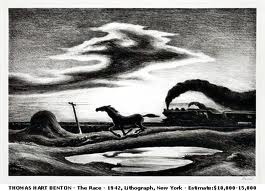 Another Benton painting, “The Race” (left), preceded “The Wreck…” by a year and portrays a horse running just ahead of the train fated to overtake him.  The VIDEO BELOW features Shannon Bonifas, one of my brilliant and beautiful daughters-in-law.  An expert on modern art, Shannon was then working at Clars, the art auction gallery in California’s Oakland-Berkeley area, and a Clars’ event was part of public tv KQED’s fundraising efforts.  Here she brings in and explains this painting more fully.

Many say the next 25 years will see technological change coming faster than the preceding 200 years, something hard to imagine.  Saying anything about what’s to come—computer screens in our glasses, even computer chips in our skulls—will virtually be old hat the next month…or hour.  Yet as obesity rates skyrocket and we hear of more and more parents realizing it might be good for their kids to just go out and play, we might be able to trace the beginnings of these dilemmas to the time when the Age of the Machine—in our time not a train but a supposedly “smart machine,” the computer—collided with the age of natural muscle.

2 Responses to Art and Technology: Thomas Hart Benton’s “The Race”