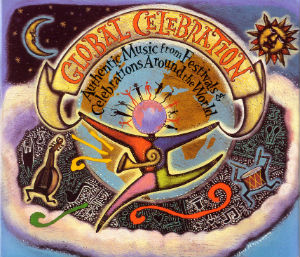 There’s no better place to introduce yourself to World Music than the boxed set Global Celebration: Authentic Music from Festivals and Celebrations Around the World. Ellipsis Arts, a record label that’s been compiling wonderful World Music collections for 20 years, released it in 1993, and as the title implies, this one features music from all kinds of celebrations. Fifty-four songs spread over four CDs: 1) “Dancing with the Gods: Religious Celebrations,” 2) “Earth Spirit: Cycles of Nature,” 3) “Passages: Turning Points in Life,” and 4) “Gatherings: Joyous Festivals.” There’s music from a Moroccan sacred healing ceremony, from a Nubian engagement, from a Cook Island welcome, from a Kenyan celebration for a first child, from Italian tarantella dances, the New Orleans Mardi Gras, even festivities in an Irish pub, even music “celebrating” death.

The word “authentic” often means live field recordings of ancient and traditional music. These can be a little difficult to listen to for long periods, even if they’re a valuable educational experience. More important, “authentic” is a difficult, charged term, perhaps especially in the arts, and perhaps most so in music. A student once did a paper for me on Irish bars, finding that while in America they tended to feature “authentic” Irish music, in Ireland bars were more likely to feature 60’s and 70’s American folk rock. If you want to make musicians bristle, tell them they can’t play this or that because it’s not “authentic.”

This isn’t to say that being authentic isn’t one important component in music, something worth preserving. But in music especially, it’s a moving target. In this Ellipsis Arts collection there is some music that’s clearly “traditional”—another charged word, though less so than “authentic,” and perhaps what we’re really talking about. For example, Disc 2 begins with a Hopi water maiden dance. But there is also more accessible “world beat” hybrid musics such as South African township jive and modern Celtic music, both of which used to draw some ire but now seem, on the whole, to be seen as completely authentic, if not traditional. Disc 1 may begin with Caledonian music used in priest ordination, but it ends with more familiar fare: an American Baptist church choir led by the great Rev. James Cleveland. But here remember Ray Charles bringing those gospel sounds into rock and roll. It brought him lots of flack but also a place in the first group of performers inducted into the Rock and Roll Hall of Fame.

This collection stretches the meaning of the “authentic” and shows us both how similar and dissimilar we are. My personal favorite is a song from a Malian thanksgiving celebration done by one of World Music’s iconic stars, Nahawa Doumbia. The voices and vocal arrangements come straight out of traditional music from Mali, but it’s all set to a driving, infectious Afro-pop beat that makes you want to dance. For me it’s a reminder of how music can help transform all life’s incidents and phases into something we can share and, even in times as hard as death, dare to celebrate.

♦  Go to the Teaching Diversity main page, and to more Reviews.