The Video/Audio below is an excerpt from the 10th show of my radio series Voices and Freedoms: A History of Jazz, based on my 1976 book of the same name.  This focuses on one of the greatest revolutions in jazz: the “Bop” music of the 1940’s. The 16-part series played across the nation for five years in the late 70’s/early 80’ and holds its relevance—or is even more so—today than it was back then. The excerpts present about 6 to 10 minutes of the original 30-minute broadcasts. The link above takes you to information about the book and our plans to re-release it and provide access to the full-length original shows. Go HERE for a complete list of shows and links to all excerpts.

The early to late 40’s probably saw the greatest revolution in jazz. Many called it “Modern Jazz,” but to most the “new” music was called Be-Bop, or Re-Bop, or just Bop.  Jazz emerged, first, as a music of astonishing complexity, and virtuosity…and speed.  In the musical excerpts I was able to fit in to the excerpt below, you’ll notice the astonishing flurry of notes played by Dizzy Gillespie and Charlie Parker, and in Gillespie’s big band number “Things to Come,” the playing is so fast and volcanic you’ll think the band could blow itself up at any moment.  Along with this musical shift towards speed, complexity, and virtuosity, the very function of jazz began to change.  Charlie Parker in particular was determined that jazz be a music to listen to, to hold up as an art comparable to European concert music in its respectability and seriousness.

Jazz had come so much out of Black musical traditions that were seen as low down.  It had come out of bars.  It was a good time music, something to romance and dance to.  We shouldn’t forget that many people did love to dance to Charlie Parker’s music, and that he loved playing dances and got energy and inspiration from doing so, but he had his sights on supposedly higher things.  It was a bold and dangerous move, something that seemed to add more burden to an already troubled life.  If jazz now began to be seen more as an “art music” than a music serving a whole range of functions, would it survive, would it be cut off from its audience and from many Black musical traditions out of which it had come and which seemed always to provide so much of its vitality and relevance?

Louis Armstrong, one of the brightest lights of “old school” jazz opposed Bop.  Though he and Dizzy Gillespie privately expressed admiration for each other work, Armstrong was reported to have said that Bop was based on malice.  The musicians now, he said, were mainly interested in “cutting,” shaming each other musically, and so producing a music with no melody you can hum, no beat you can dance to, so now there’s less work and everyone is poor again.

In fact, the famous jam sessions organized by Gillespie and Thelonius Monk* at Minton’s in New York City, were sometimes seen as sessions devised to keep no-talent guys out, to overwhelm them with difficult chords, and virtuosity they couldn’t match. 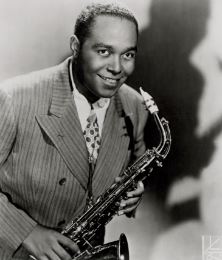 The excerpt below takes pains to show that many of Bop’s musical innovations—particularly its growing harmonic complexity and the continuing subdivision of the musical beat—come straight out of musical forces present in jazz from the very beginning, especially in Black musical traditions. I want to emphasize here that this effort to keep no-talent guys out also does.  I have said that what keeps this radio series relevant—perhaps more relevant today than when it was first released—is the degree to which issues of race always shadow my history of this music.  Keeping no-talent guys out is also a vital continuation of the Black effort to keep their music from being stolen, because many of these “no-talent guys” were white.  Now they were faced with a music so complex and fast, they couldn’t just write it down, and it was so full of virtuosity they just couldn’t play it.  There’s a story, perhaps apocryphal, that Miles Davis said a Bop lick that did become generally used and popular had words to it, too, and those words were “white mf’s.”  Every time you hear that lick played by a white band, he supposedly said, you can just smile.  In earlier times—in Ragtime, in imitations of New Orleans jazz—the effort to retain ownership failed so miserably that it often seemed that Blacks were following in the footsteps of the white musicians who had just popularized the music that they—Blacks—had created.  It happened with Bop, too, eventually, but not to the extent it had happened earlier.  It was more successful at keeping Black music Black, but the price may have been too high.  It threatened to cut off jazz once again from the American musical mainstream.  It spawned a counter movement, Cool Jazz, that made it easier for whites to participate in: that is, to steal.

♦ Go to the Diversity Training and Teaching main page, and to a list of these radio show excerpts. *Also, the excerpt below focuses mostly on Dizzy Gillespie and Charlie Parker. Among those mentioned in the full show were these co-creators of Bop: pianist Thelonius Monk (mentioned above), drummers Kenny Clarke and Max Roach, and guitarist Charlie Christian. Of course there were many more.