The VIDEO below shows my friend Dena Byrd and I introducing a new ministry team at our church—the JEDI Ministry.  It’s one small example of what a church can do to engage some of the major issues of the day, something the Christian church has often failed horrendously to do.* 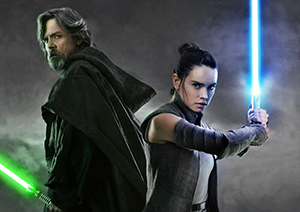 No. Not this kind of Jedi.

JEDI began as a the Full Inclusion Taskforce, working to make our congregation a Reconciling Church, one which fully included LGBTQ persons.  But “reconciling” had, in our minds, a larger scope than sexual orientation, and even before the murder of George Floyd earlier in this tumultuous 2020 year members of the Taskforce had wanted to keep working on full inclusion, now focusing on issues of race.  As we worked to define our mission we began focusing on four things: justice, equity, diversity, and, sticking with our original charge, inclusion.  “Hey,” said Michelle Braxton, “that spells JEDI.”  I blame her for bringing it up, but the name has stuck.  We’re the JEDI Ministry, and as we invite members of our church to join us, we sometimes talk about “becoming JEDI.”

You can read our Vision Statement and Goals HERE.  Basically, we believe that for a church to become a Beloved Community, one where members grow closer to God, to each other, and to its community, it must also embrace—along with its traditional emphasis on our personal relationship with God—justice, equity, diversity, and inclusion.  We have often thought this embrace at odds with personal piety, thinking that a “social gospel” will take away from an emphasis on the individual and on the church as something “holy” and therefore separate from the corruption of “the world.”  We don’t want politics or social issues in the pulpit, we say, and many times that is right.  But much of the work of the church occurs outside of the pulpit as well.  JEDI seeks to break down this division and show that as the church seeks to fight the world’s corruption we grow as Christians because we’re doing this together and we’re engaging more fully one characteristic of Jesus that many pious people often got after him for:  he refused to separate himself from the world, even those parts most people thought were totally corrupt.  And even before Jesus’ physical appearance, the prophet Micah (in 6:8) famously said, “And what does the Lord require of you but to do justice, love mercy, and walk humbly with your God.”  Fighting against injustices in the world, in other words, increases our love of mercy and our humility before God. 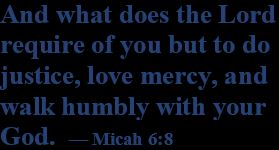 So JEDI does three things, has three goals.  First, we study together as a ministry team, guided by our own interests, expertise, and the most important issues of history and today.  Second, we select from what we’ve read or watched those things we think might most benefit our congregation, then invite the whole church to read or watch and engage in special discussion sessions.  Finally, based on what we’ve studied as a ministry team and discussed together as a church, we try to move beyond study and discussion to action.

Our action plans are led by ministry team members according to their own interests and expertise.  Others in the team come along-side to help as they can, and we also put out calls to the congregation to help with this or that plan.  So far we’ve developed plans around four issues:  Voting, Poverty Reduction, and Advocacy, and we continue our interests in LGBTQ issues.  For example, two of our members who were interested in Voting and connected to The League of Women Voters held a voter registration event and sponsored an informative talk on voting by a LWV representative.  I chipped in by doing a video and article called “Voter Suppression 21st Century Style,” and produced a two-page summary of these for the voter registration drive.  I suspect our interest in this will continue, probably focused on resisting or rolling back efforts to gerrymander voting districts.  Because of my connection to The Neighbor Project, much of which began as our family foundation Emmanuel House, I will be exploring a long-term project joining The Neighbor Project and the South Suburban Immigration Project to help working families in or nearer Bolingbrook, IL, escape debt, build credit and savings, gain financial stability, and possibly even purchase a home.  Home ownership is the single greatest driver of the wealth gap in the United States, and especially the racial wealth gap.**  Others in the JEDI team are interested in advocacy for policies increasing Justice, Equity, Diversity and Inclusion in our society, and against policies that decrease these.

Perhaps the operative phrase in the paragraph above is “long-term.”  At a Laity Convocation in February 2020, I said that IF we worked really hard we could begin to see a less racist, less exclusionary, United States in 40 to 100 years.  A person on the panel at that Convocation said he thought I was being too optimistic.  I was.  But there are things happening all over the country to fight racism, as much or more now than at any other time in our history.  We can only hope everyone understands they must be in for the long, long haul.

*  I’ve spoken about this in my sermon “Who Do You Stand With?”, which preceded the church’s vote on whether to affirm LGBTQ persons’ “full inclusion” in church life and become a “Reconciling Congregation.”  The Full Inclusion Task Force soon after became the JEDI ministry, broadening its concerns to now focus on race and other full inclusion issues.

**  There’s no better place to gain a sense of The Neighbor Project’s work and vision than the talk executive director Rick Guzman gave at TNP’s 2020 Virtual Gala.  We need both vision and action and “Every Person’s God-Given Ability to Contribute” gives us a great example of how to articulate this.