Becoming the Beloved Community: The Workshop 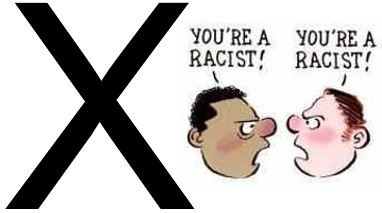 At the Becoming the Beloved Community workshop, calling someone racist is forbidden.

On September 11, 2021, I presented a pilot version of the Becoming the Beloved Community (BBC) workshop, and the VIDEO below shows about 16 minutes of the introduction I did for it, beginning with acknow-ledging the members of the committee I was privileged to lead.  We worked for nearly nine months on the workshop and will work more on it,  refining not only the content but the overall framework.  This includes the setting up of small groups that meet before the workshop and then interact after each workshop segment.  The workshop is about becoming anti-racist and talking to others about racism, but the words “racism” or “anti-racist” aren’t part of the title.  This was our attempt to signal that this workshop takes a deeper look and longer view than what’s usually the case in anti-racism workshops.

This post is part of a series based on ideas in the BBC workshop.  The series’ Lead Post—“Does it matter if I’m a racist”—explains why we need to re-frame our race talk, re-balancing the personal with the systemic, and inviting people into a dialogue by taking the emphasis off calling each other racist.  There’s a video in this Lead Post that further reinforces why the BBC workshop re-frames our race conversation this way.  Calling out individuals because of their racism is what our race conversation usually focuses on.  But that not only shuts off dialog, usually,  but also isn’t as productive as taking a hard look at the systems that underlie, support, and nourish racism, whether it’s individual-, institutional-, or policy-based.  The introduction below tries to establish all this.  What it doesn’t do, however, is emphasize how important sharing our stories with each other is.

Between the workshop’s Introduction and Conclusion, there are three segments, each one beginning with a meditation on Privilege, then a consideration of a Social or Justice Issue, then concluding with those small groups sharing their stories.  The sharing helps to  personalize what’s just been presented.  That’s crucial to this workshop.  We don’t want people coming out of it with “just” head knowledge, but also things felt in the heart.

The pilot went very well—exceedingly so, our committee thought—though some said we were preaching to the choir.  That choir, however, was not just mainly sympathetic. It was also filled with experts—and many of these arrived skeptical.  One attendee is a member of the Anti-Racism Taskforce of the Northern Illinois Conference (NIC) of the United Methodist Church, and one of the conference’s foremost resources and speakers on race.  Afterwards, she said, “I was thinking, Well here’s yet another workshop. Am I just going to be rolling my eyes. But, no, this was different and powerful.”  And the workshop is just one of the components of an array of activities in the NIC meant to take a long, sustainable run at dismantling racism.

At a NIC Lay Convocation in February 2020, just before COVID shut down so much of the world, I spoke on a panel, saying that IF we worked really hard we might see a less racist U.S. in 40 to 100 years.  One of the other panelists, Chris Pierson, black, and a pastor in one of the conference’s larger churches, said that while he respected me, he thought that I was being too optimistic.  Forty years—Yes, that’s being optimistic.  I address that long timeframe in the video below.  Chances are I won’t see that more Beloved Community—a community freer of the -isms and phobias that keep us apart.  But folks 100 years from now.  Maybe.

♦  Go HERE for a list of workshops and trainings I’ve done, including ones on leadership, writing…and race.  And go to “Noble Sentiments…,” the Lead Post in a series based on the 2020 Lay Convocation I mention above.