Ben Hecht: A Town Where You Could Stay Yourself

This article is part of a continuing series on Chicago Writers, most of whom are contained in two of my Chicago books: Black Writing from Chicago, and, with David Starkey, Smokestacks and Skyscrapers.  Go to complete lists of Chicago and Black writers in this series. 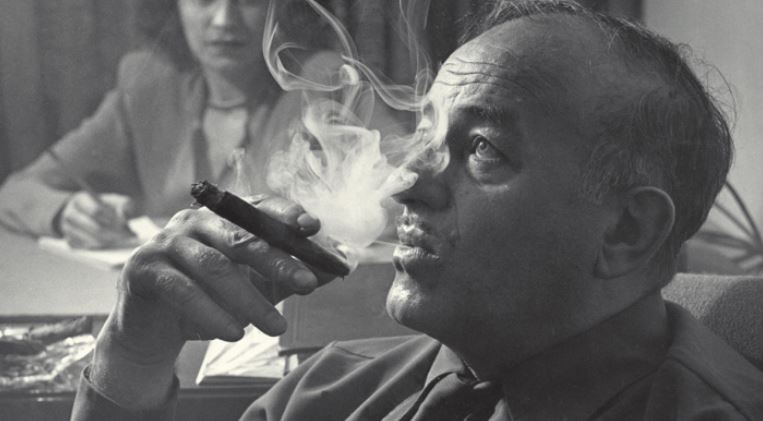 Ben Hecht (1894-1964) was born in New York City but long associated with Chicago, though he lived there for only 14 years, from 1910 to 1924.  During that time he wrote enough for an entire career, and, as Adina Hoffman, one of his biographers wrote: “What he produced here was important. But it was what he did with Chicago after he left that really matters.”  He wrote, for example, his most famous work, the play The Front Page (1928, with Charles MacArthur), which sets Chicago as the scene for a depiction of the often cutthroat nature of the newspaper business.  And in 1927, on his way to establishing himself as Hollywood’s ace screenwriter, he won his first Academy Award for screen writing—the first such award ever given—for his gangster film Underworld, thereby making the Chicago gangster the Hollywood, and thereby the nation’s, prototype of all gangster characters, perhaps even to this day.

Among his other Academy Award nominations for screen writing are Wuthering Heights (1939), Notorious (1946), and The Scoundrel (1935, another Award winner).  He wrote over 60 screenplays and published over 30 books of stories, sketches, and autobiography, as well as novels such as The Florentine Dagger (1923), A Jew in Love (1931), and Miracle in the Rain (1943). Hoffman called him a complicated “alloy:” “novelist and journalist, screenwriter and activist, and perhaps most viscerally, American and Jew, no more no less.” He wrestled mightily with his Jewishness, though Hitler confirmed him in it, and he was one of the first to warn of the impending doom of World War II and make us aware of the Holocaust.  He worked for two Chicago newspapers, the Chicago Daily Journal and Daily News, where his fellow news writer, Carl Sandburg, wrote a poem calling Hecht “a Jewish Huck Finn.”

Though some critics complained that Hecht’s work never escaped the rush and shallowness of the journalism business, in our book Smokestacks and Skycrapers: An Anthology of Chicago Writing, David Starkey and I included his sketch “World Conquerors” from his 1922 collection 1,001 Afternoons in Chicago, a work which shows that his journalistic style—often characterized as colorful, even “gaudy”—had its quiet, 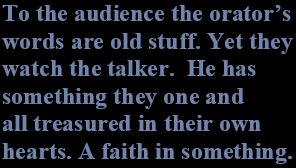 restrained side as well, a feat in this particular instance, given the sketch’s subject matter: the continuing violence of radical movements fomenting throughout the city in the early 20’s, part of the legacy of such events as the Haymarket Riot of 1886.  In often short, staccato sentences Hecht carefully builds a sense of the dramatic situation that would serve him well as a screenwriter.  He focuses, for example, on the first speaker, “a very bad orator,” who nonetheless begins to capture the audience.  His words about injustice and the working man being slaves long enough, are predictable.  “This, to the audience,” Hecht writes, “is old stuff. Yet they watch the talker.  He has something they one and all treasured in their own hearts. A faith in something…Suddenly there is a change in the hall. Our stuttering orator with the forceful manner has made a few startling remarks.  He has said, ‘And what we must do, comrades, is to use force. We can get nowhere without force. We must uproot, overthrow and seize the government.’”  A policeman standing in back approaches the stage, and everyone begins to think it’s the heavy hand of government coming to stop such blasphemy, but the policeman only wants to report that a car out front has been vandalized.  The main speaker then takes the stage. He is polished but also cynical of his audience, knowing that for many true Revolution is only one of many hobbies.  The sketch ends with him taking a street car home, “a messiah of the proletariat who dreams of leading the masses out of bondage.”

When he left Chicago in 1925, the New Yorker published his farewell-and-good-riddance to Chicago.  As Tribune critic Michael Phillips writes, in his review of two 2019 Hecht biographies (Hoffman’s Ben Hecht: Fighting Words, Moving Pictures, and Julian Gorbach’s The Notorious Ben Hecht: Iconoclastic Writer and Militant Zionist), Hecht thought Chicago culture was just a myth. “The city’s innate ‘cowardice,’ provincialism and ‘herd-inspired ethics’ were enough to drive a guy nuts…Four years before his death, he took it all back.  ‘We were fools to have left Chicago,’ Hecht wrote in 1957. ‘It was a town to play in, a town where you could stay yourself, and where the hoots of the critics couldn’t frighten your style and drain your soul.’”

This entry was posted in Black Writers, Chicago Writing, Writing and tagged Ben Hecht, Black Writing from Chicago: In the World-Not of It?, Smokestacks and Skyscrapers: An Anthology of Chicago Writing, The Front Page, Underworld. Bookmark the permalink.