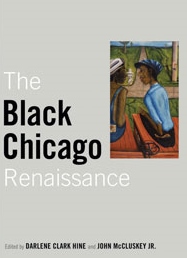 In the opening line of her introduction to The Black Chicago Renaissance, Darlene Clark Hine writes that “beginning in the 1930’s and lasting into the 1950’s, black Chicago experienced a cultural renaissance that rivaled and, some argue, exceeded the cultural outpouring in Harlem” (p. xv).  I am one of those who has argued that.  My book, Black Writing from Chicago (2006), focuses on various literary forms, and the ten essays following Hine’s introduction not only put that writing into more cultural, historical, and social context than I had space to do, but also make clear that musicians, performers, and visual artists were perhaps an even more vital part of that outpouring.

Samuel A. Floyd Jr.’s “The Negro Renaissance,” while focused on music, most succinctly captures the importance of seeing all artistic productions holistically and in context.  Many leaders of the Negro Renaissance counseled turning away from black arts they deemed “low,” but Langston Hughes and many of his peers—especially in Chicago, where Hughes had deep professional roots—fought against that distinction.  “Let the blare of Negro jazz and the bellowing voice of Bessie Smith singing Blues penetrate the closed ears of the colored near-intellectuals,” Hughes wrote (p. 40).  This “was part of the strategy (conscious or unconscious),” writes Floyd, “to merge social, political, and artistic values in a frontal assault on access to the fruits of white society” (p. 40).

Elsewhere in the volume, Elizabeth Schlabach explores how Chicago luminaries Richard Wright and Gwendolyn Brooks conceived black identity forming in the struggle between the confines of material reality and expansive inner consciousness.  David T. Bailey’s essay on Horace Cayton—the best piece I have read on Cayton—explains how his conflicts over blackness caused him to fade from sight while the book he co-wrote, Black Metropolis (1945), remains one of the most venerated pieces of black scholarship of all time.  Hilary Mac Austin’s “The Defender Brings You the World” expands our understanding of the Chicago Defender’s enormous national influence by following Patrick B. Prescott Jr.’s series on world travel, which the Defender published to help expand black global consciousness. 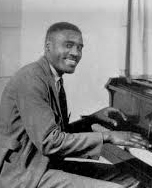 The great bluesman Leroy Carr, from Indiana, a great influence on Nat Cole

Readers of this magazine (see below) will be delighted to find Indiana’s own William Edouard Scott commanding much attention.*  Widely considered the dean of African American painters of the time, Scott is the fourth most referenced single person in the volume, behind only Richard Wright, Charles White, and Horace Cayton.  As for writers, Indiana was originally home to Metea, Simon Pokogon, George Ade, and Theodore Dreiser, all of whom David Starkey and I included in Smokestacks and Skyscrapers (1999), but connections of black Indiana and Chicago writers during the Black Chicago Renaissance need exploration.

I found some exclusions strange, however. No contributor mentions Frank Marshall Davis, important both to the Negro Renaissance and the Black Arts movement.  He also 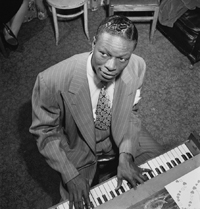 contributed to the Gary American, a significant Indiana publication.  Musically, Nat King Cole goes missing.  Perhaps we associate him more with California, but he was part of the extraordinary arts legacy of Chicago’s DuSable High School, and, in Chicago during the Renaissance period, was working out his own important responses to Earl Hines, who is talked about in relation to Louis Armstrong’s seminal Chicago recordings.  Another of Cole’s great influences, however, would also have led us back to Indiana.  It was Leroy Carr, who along with Scrapper Blackwell—also from Indiana—formed one of the greatest duos in blues history. 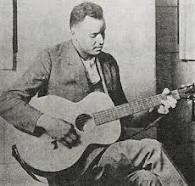 Of course, one cannot possibly include every important person in a volume, so ending with my surprise at some omissions is not a reflection on the overall excellence of The Black Chicago Renaissance.  Still, as I know acutely from those I missed or did not have space for in my own books about Chicago, every miss leaves out many other connections.  It was Scrapper Blackwell’s “Kokomo Blues,” for example, that transformed into Chicago’s anthem—“Sweet Home Chicago.”

* My review of this book appeared in the September 2013 issue of the Indiana Magazine of History, University of Indiana, Bloomington.  Because of the magazine’s location, I was asked to mention some links back to Indiana.  As it turned out, there were many important ones.

♦ Read more reviews on this site.