He Would Have Been One of the Greats 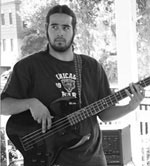 Bryan Emmanuel Guzman died on December 9th, 2006, shortly after his 21st birthday. His passing was widely covered, taking up nearly the entire front page of one paper with the headline “He would have been one of the greats.” This referred to his enormous musical talent, but he was already a great spirit who drew so many to him with his humor, grace and gift for friendship. He 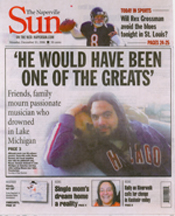 played in bands with his brother Daniel and also with his father and Daniel doing shows on Chicago and the poetry of war.***

He helped his father with the book  Black Writing from Chicago,  called “A work of great importance” by poet Carolyn Rodgers, and “impressive” and “fascinating” by the Chicago Tribune.  He majored in sociology at North Central College, where one of his professors said Bryan “always asked the right questions.” He said he saw himself and his music contributing to changing the world. He was an artist with a strong sense of justice who wanted to make a difference—and did.

Among the many memorials to him is the song “Hallelujah” recorded by a group of Chicago musicians, but perhaps the most visible is Bryan House, founded by his older brother Rick and Rick’s wife Desiree to serve refugees.  As the Bryan House concept grew the house itself became part of a larger organization, Emmanuel House, which serves all of the working poor, helping lift them out of poverty through home ownership, education, and community development, things very important to Bryan.  Learn more about Emmanuel House Here.  Emmanuel—“God with us”—was Bryan’s middle name.  A plaque of the newspaper front page shown above now graces the conference room of the Emmanuel House headquarters.

In 2016, Emmanuel House was named one of the “Top 100 Most Innovative” social change organizations in the world.  In 2018 it merged with long-time partner The Joseph Corporation to become The Neighbor Project.

>>> Listen to Dan Guzman’s music.  On some songs —like “Moby Stank,”  “Roundabout,” and “But It Was” —you can hear Bryan’s playing and singing.  Plug into speakers or use headphones to catch his bass more clearly on these songs and on music accompanying videos like the Grand Opening of the Emmanuel House Headquarters.

*** Listen to “Why I Oppose the War” a combination of MLK, Jr’s voice and words and the Guzman’s music.  It was a staple in shows Bryan did with Daniel and his father.

One Response to Bryan E. Guzman