Posted on December 7, 2016 by Richard Guzman

The video below looks back to the December 2008 dedication of Bryan House, a memorial honoring Bryan Emmanuel Guzman.  This December 9th will mark the tenth anniversary of his passing.

Days after Bryan’s death, his oldest brother, Rick, and his wife Desiree announced their intention to found this living memorial dedicated to helping refugee families escape the cycles of poverty that so often entrapped them.  They started the Bryan House project in January 2007, and by late 2008 they had bought and nearly finished rehabbing a large building with four  family units and a studio.  Finished or not, the first families began to arrive.  Over the years as its mission succeeded and grew it became Emmanuel House, now dedicated to helping not just refugees, but all the working poor it could reach—and now with a growing number of other sites, a larger staff (including executive director Hayley Meksi), and a beautiful headquarters.

In 2016 Emmanuel House was named one of the Top 100 Most Innovative social change organizations in the world.

The Emmanuel House main page on this site chronicles, in part, many of the honors the project has garnered in the near-decade of its existence, honors in the form not just of awards, but in the form of hundreds and hundreds of dollars, volunteer hours, and good wishes.  Our family couldn’t be more thankful.  Yet, of course, each milestone can’t help but also be bitter sweet for us.  I remember often working in and walking around Bryan House saying to myself, “My son, this is what your death has made.”  Each grandchild we’ve been blessed with is another soul who will never have met Bryan in the flesh.  “If Uncle Bryan were alive, would he love me?” asked our oldest grand daughter Micah just last weekend.

And Bryan was such a Cubs fan!  How he would have loved this year.  Without him we felt another pang in the midst of the celebrations. “Win it for Bryan!” texted Rick to us all during the team’s historic run, and a minute after they had won their first World Series since 1908 I  texted the picture at left, a replica of a brick laid in a plaza at Wrigley Field, another memorial given by family and friends in Bryan’s honor. 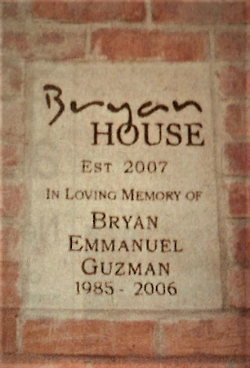 So many of those friends are in the video below, and during the short talks we often take our crude video camera off the speaker, panning around the room instead, trying to get them all in.  Rick introduces some of the refugee families, and in this and other things he says that night you can already see concerns forming that will lead him to announce, earlier this year, his run for Mayor of Aurora, Illinois’ second largest city.  The families favor us with a song. Then it’s out into the cold December night, traffic whizzing by Bryan House’s front door.  There we unveil the memorial stone placed in the brickwork by Desiree’s Dad, Steve Tolbert.  The crowd gasps at its beauty and cheers, and then Bryan’s brother Daniel leads us in singing: “Emmanuel, Emmanuel, His name is called Emmanuel.  God with us, revealed in us.  His name is called Emmanuel.”  Please join us as the video below brings back as much of this dedication night as it can.