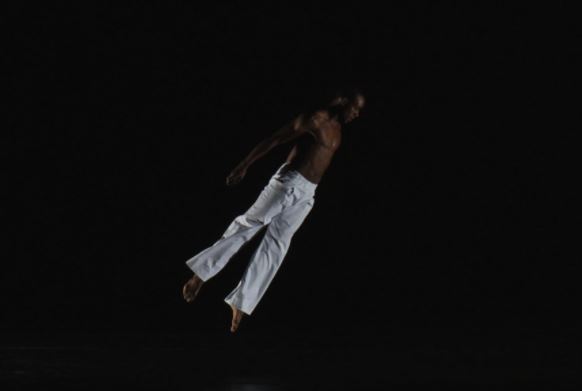 Over 100 hard, athletic jumps in a little over 5 minutes, an average of about 1 every 3 seconds—though 90% of them are packed into the last 3 minutes of David Parson’s dance piece “Caught.”  That’s probably one reason Nora Fitzgerald, writing for the Washington Post on November 1, 2013, describes the dancer as “a little on edge.”

“One man stands on the stage, in the spotlight, alone and perhaps a little on edge. His dance begins slowly, with single bold movements and a few quirky gestures.

“Suddenly, he takes flight. The audience, thrilled, alternately gasps and cheers as he walks, floats and dances on air. He doesn’t land until the dance ends. Choreographed by David Parsons in 1982, ‘Caught’ was a modern dance sensation so buoyantly accessible that men who don’t like dance much recommended the piece to other men who like dance even less.”

The VIDEO below show about 3 minutes of “Caught,” one of modern dance’s most spectacular, crowd-pleasing pieces.  But videos of “Caught” barely capture the experience.  “I’m proud to say,” Parsons himself has said, “you have to see ‘Caught’ live.’  Seeing things live.  The phrase resonates powerfully as we hope we’re coming close to the end of our pandemic.  We hope.  A little like the dancer, we’ve felt suspended, everything up in the air.

It’s not quite true, though, that the dancer in “Caught” doesn’t land til the dance ends.  Here’s part of Eileen Sondak’s LA Times review, written nearly a quarter century earlier (November 1989), when David Parsons himself was dancing his own creation.

“Sunday night in San Diego, under blinking strobe lights that created a marvelous illusion of flight, Parsons awed the crowd in ‘Caught,’ his most-celebrated solo. The whistles and screams of approval began as soon as the dancer took flight on this exciting airborne romp across the Mandeville Auditorium stage.

“Parsons came down to earth regularly during the course of the dance, but you couldn’t prove it by what you saw on stage. Every time the lights flashed on to capture the nimble dancer in action, he was hurtling through space in gravity-defying, mid-air maneuvers.”

I’d say, in fact, that those moments when we see the dancer firmly set down on earth, breathing hard but standing still, are the most thrilling moments of “Caught,” the ooh’s and aah’s of the audience turning into the most thunderous applause.

♦  For more on the arts, including dance, go to the ARTS Main Page

This entry was posted in Arts, Music & Media Podcasts and tagged "Caught", David Parsons, our pandemic. Bookmark the permalink.