In Racing Across the Lines: Changing Race Relations Through Friendship, Deborah Plummer pushes into the next frontier in race relationships.  Because racism is so systematically ingrained in our society, we need to continue to attack it with social programs, laws, all kinds of incentives.  Yet Plummer points out that even in those corporations, churches, and organizations that may be integrated on the surface, few people in those places relate closely to one another once the workday or worship time ends.

Few cross racial and cultural lines to actually become friends.  It’s stunning to realize how lacking this basic, human need of friendship is vis-à-vis race relations.  Plummer wants to help us close the gap between mere acquaintance and deeper relationship.  The chapters convey how very difficult it is to close that gap, cross that line.  We naturally “stick to our own kind,” and friendship circles hardly ever overlap.  When they do, all kinds of personal, social, and historical habits and misperceptions make genuine, honest conversation difficult at best.

“It’s naïve to think that we have overcome racism,” says Plummer, “although we have entered into discussions…Yet , in the new millennium, discussions about race, especially between blacks and whites, play out like a movie script.”  Following that script, we don’t really discuss at all, but fall into old patterns either of outright prejudice or polite avoidance. 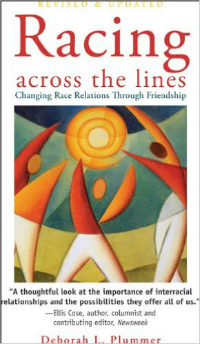 At the end of each chapter Plummer gives us three categories of “exercises”: ones “For Personal Reflection,” “For Group Dialogue,” and “For Spiritual Practice.”  “Consciously and willingly, call forth the presence of God while in a multiracial setting.  Doing so is guaranteed to reduce racial stress.”  That’s the exercise that ends the chapter where she talks about those old scripts.

The exercises seem jarring.  They lend a kind of schizoid air to the book.  From hearing how difficult it is to form cross-racial friendships, we’re suddenly in a multiracial setting calling forth God’s presence.  Once I got used to this leap, however, I began to understand what is perhaps the book’s underlying message.  Becoming friends across racial lines isn’t just going to happen.  There has to be a leap of faith and action.  We have to learn how to be intentional.  Otherwise, those old scripts will keep us right where we are: segregated—our lives missing the incomparable richness of multicultural friendships, which can widen our world view and deepen our humanity like few things ever do.

Much of the book is filled with stories of successful and unsuccessful attempts at cross racial friendships.  Plummer often starts her chapters telling about walks with her friend Yvonne.  But she also distills these stories into suggestions and principles, and nowhere more than in chapter ten, where she gives what she calls, “a formula for the interracial marriage of all Americans.”  It comes in two lists—one for people of color, one for whites:

“FOR PEOPLE OF COLOR: Ten Easy Steps to Stop Whining

FOR WHITES: How Not to Exude Privilege

These are important lists, and everything on each list is difficult—especially, for whites, acknowledging privilege.  That, in my estimation, is the most difficult thing to do on either list, but it would change race relations over night, whether between just two people, or between large groups.  Yet every call for an “apology” to blacks for our country’s slave past,

or any acknowledgement of white privilege is met with massive resistance.  Americans would rather talk about anything—absolutely anything—but race, and especially race and privilege, except perhaps to turn the tables.  Many whites love to talk about reverse discrimination—which I believe does exist, but which is dwarfed by absolutely monumental tides of privilege flowing the other way.  For every one case of a minority getting into college because of race, for example, tens of thousands never get a fair chance.

Plummer’s book doesn’t give us a rosy picture of race relationships today, but it does hold out hope that we can someday not just tolerate each other, but become true friends.     Friendship could simplify things by turning down the heat, transforming our over-burdened history and cultural shame into one-on-one, face-to-face conversations.  In this way, courageous, intentional friendship could play an important part in helping us to end such massive resistance to talk about what seems so unspeakable.  It would be a first step, and still hard, but worth a try.

♦ Go to the Teaching Diversity main page, and to the Reviews main page.

♦ Read about “The Invisible Knapsack,” perhaps the most famous essay on while privilege.