As part of commemorating the 10th anniversary of Bryan Emmanuel Guzman‘s death, below we post Part 1 of a front page article about Emmanuel House written by Jenette Sturges for the Aurora Beacon.  Go here for PART 2.  Founded by Rick and Desiree Guzman as a living memorial to Bryan, Emmanuel House was, in 2016, named one of the “Top 100 Most Innovative” social change organizations in the world.  Also in 2016, Rick announced Guzman for Aurora, the organization behind his run for mayor of Illinois’ second largest city.

Families routinely pull out old photo albums around the holidays, to remember loved ones who have always had a seat at the table but have since passed, or to recall the joys of past Thanksgiving and Christmas get-togethers.

But few of those old family photos probably include treks to African refugee camps.

John Mushunduzi, 19, smiled wide as he sprawled out on the living room floor, looking through a photo album of his family surrounded by the leafy green foliage of sub-Saharan Africa.

John looks much the same, tall and lean, with close-cut hair, but his sister is unrecognizable. In the photo, taken in a refugee camp after they fled their home in the Democratic Republic of Congo, she is small, skinny and bald. Now in the U.S. more than three years, her hair, shorn in the refugee camp, has grown long and she’s gained more than a foot in height. 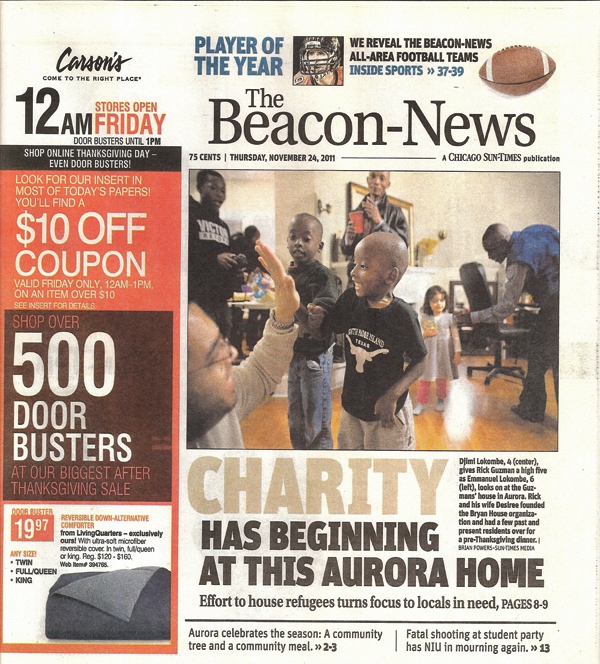 On Sunday, the siblings teased one another as they looked over the album together. John, now a senior at West Aurora High School, puts his family’s upheaval simply.

Having a place to live, especially one that gives refugee families a place to establish themselves in America, has made the adjustment a little easier.

And on Sunday, the families of Bryan House gave thanks for that home as they gathered for an early Thanksgiving dinner. Thirty-nine people, only a portion of the families who have lived at the refugee home, crowded into the kitchen of Rick and Desiree Guzman over a turkey and large dishes filled with rice, meat, bean and vegetable dishes representing the cuisines of seven countries.

“We were living rent-free at IMSA and we took the money we would have been spending on rent and saved for a down payment,” said Rick Guzman, who founded Bryan House with his wife, Desiree, and now chairs the organization’s board. “We just thought if we could do it, a lot of refugees and working-class families could do it, too.”

So Bryan House got its start five years ago in the Guzmans’ own home when they welcomed in the Labradors, a family of three Cuban refugees the couple had met through Desiree’s work at World Relief. Rey Labrador, his wife Yanary and their daughter Amanda had sought asylum in the U.S. after Rey started running into trouble with the Cuban government.

A few months after moving in with the Guzmans, the Labradors had saved enough for a down payment and bought a home in Aurora.

Just as the organization was getting off the ground, Bryan Guzman, Rick’s brother and a student at North Central College in Naperville, died unexpectedly.

So the fledgling nonprofit took his name.

In 2007, when Bryan House grew into an actual house—the organization had raised enough through sponsorships to purchase an apartment building on Lake Street that is home to five families—a brick was laid at the foundation of the building in Bryan’s memory, inscribed with an excerpt from an e-mail he sent that was found after his death: “I’ve always envisioned myself as someone who would change the world—even though I haven’t done that much to contribute yet.”

The tribute seemed fitting, said Guzman, since Bryan had been involved with the refugee families from the start. Now he is contributing, said Guzman, “not to his own memory, but to real solutions to the urban poverty and housing issues that we all cared about.”

—Read PART 2 of this article—

♦  Go to a video chronicling Senator Dick Durbin’s visit to an Emmanuel House site in 2012.  One of its features: Rey and Yanary speaking with him about their Emmanuel House experience.