Part 1 of the article below ends with Bryan Emmanuel Guzman talking about the contributions he hoped to make to change the world.  Part 2 now begins with reference to that desire.  We post this article about Emmanuel House—written by Jenette Sturges for the Aurora Beacon—as part of commemorating the 10th anniversary of Bryan’s death.  Founded by Rick and Desiree Guzman as a living memorial to him, Emmanuel House was, in 2016, named one of the “Top 100 Most Innovative” social change organizations in the world.  Also in 2016, Rick announced Guzman for Aurora, the organization behind his run for mayor of Illinois’ second largest city.

That contribution has touched more than just the few families who live at Bryan House at any one time.

Families like the Labradors are now following in the Bryan House tradition. They’ve since opened their home to another family of Cuban refugees, helping them get on their feet.

“They were located to Florida,” said Yanary. “They said it’s hard to find a job, so we said the only way to help was to come here and live with us.” 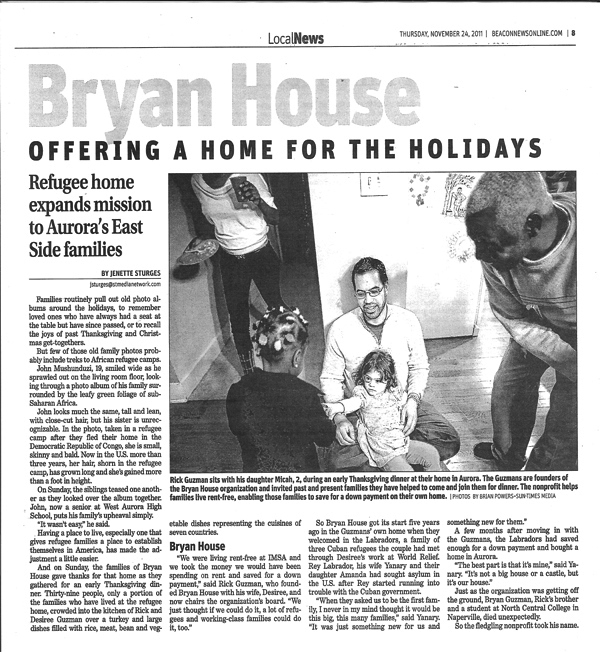 Both families came for last Sunday’s early Thanksgiving celebration, joining in the prayer before dinner.

“We give thanks for the amazing number of ways you’ve blessed us,” prayed Guzman, “and we ask your blessing for these families on their journeys in this country and in this wonderful city.”

Among those blessings is the expansion of the mission of Bryan House to a larger umbrella organization. Dubbed Emmanuel House, the new nonprofit, with the support of the local church community, aims to bring the same model established at Bryan House to working poor families while also helping to stabilize Aurora’s near East Side.

Around the beginning of the new year, Emmanuel House will be up and running, welcoming East Aurora families — typically, those who earn about 50 to 80 percent of median income ­­— into a series of homes on the East Side that will use the same Bryan House model of temporary rent-free living to save for a down payment.

Families go through an application process that emphasizes recommendations from other community members, and the waiting list for these East Side Emmanuel House apartments is growing.

Already, one home on Claim Street is undergoing renovations — the house had been gutted by former homeowners and needed everything from new wiring and plumbing to a new furnace — and should open within a few months. Another, on Spring Street, is a short sale that’s under contract and awaiting bank approval.

Uni Muniz and her son, Issac, will be the first family to move into Emmanuel House.

“Being widowed, and with this so close to home, I jumped at the opportunity,” said Muniz, a massage therapist and volunteer at the Jesse Torres Boxing Club, also on the East Side. “There’s something about owning that just makes you feel a little bit better about yourself.”

“All other things being equal, when you own a home versus rent, families have 12 times the wealth, and you move less often. The stability means kids are more likely to graduate high school and college,” said Guzman. “The community ends up significantly better off, too. More people becoming homeowners helps create jobs and greater neighborhood stability, and people who own homes become more engaged.”

Home values also increase in neighborhoods where more people own their homes rather than rent.

Just like at Bryan House, families will pay market-rate values for rent, but all those funds go into a savings account. They’ll also have an established record of savings and of regular payments on their lease, and they’ll get financial counseling from Joseph Corporation to prepare them for taking on a mortgage.

Muniz said she can’t wait to have her own home for the holidays.

“For me, it’s something you can leave to your kids,” said Muniz. “If the parents own a home, the kids are more grounded. Mine are all grown up, but it still applies — that’s mom’s house.”

♦  Go to a video chronicling Senator Dick Durbin’s visit to an Emmanuel House site in 2012.  One of its features: Uni and Isaac’s Emmanuel House story.  You can also catch a glimpse of Isaac marching up front with Guzman for Aurora in the July 4th Parade.