The Video below plays about 1:24 of Chet Baker’s “Moon and Sand.”  Most people consider “My Funny Valentine” his essential classic—and it is—but I return to “Moon and Sand” more than anything he ever recorded.  For one thing—though I know this is strange and probably silly, too—it helped me understand something spiritual, which I’ll return to briefly later.

There’s sometimes a great gulf between an artist’s work and life, the work being beautiful, the life being reprobate.  Phil Johnson’s review of James Gavin’s biography of Chet Baker begins: “Rock’n’roll reprobates from Keef to Kurt and beyond pale into pasty-faced insignificance when compared with the James Dean of jazz, the trumpeter Chet Baker.”  It’s clear, says Johnson, that Gavin disliked Baker, who died at 58 when he fell from an Amsterdam window.  Or, as many believe, was pushed through it over a drug deal gone bad.  In Gavin’s book, Deep in a Dream: The Long Night of Chet Baker, we learn (as Johnson summarizes it) that “…the trumpeter was on 6g of heroin a day by the time he died. And that’s not counting the cocaine, codeine, barbiturates, alcohol and hash Baker used as a regular top-up; he injected the former every five minutes or so if he was taking it on its own, less often if mixed with heroin in his favourite cocktail, the speedball.”  This, among many other things, caused Baker’s infamous unreliability.  He shows up right on time for a recording session with the great Herbie Hancock, but he’s right on time four days late.  He goes to the bathroom during a session with Van Morrison…and never comes back. Etc. 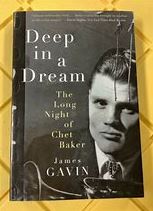 He started with James Dean good looks, becoming perhaps the most legendary white trumpeter since Bix Beiderbecke, but ends up an ultra-wrinkled mess.  And, really, as a trumpeter won’t ever be ranked with the greatest, or even close to it.  Ethan Hawke, who plays Baker in the bio-pic Born to Be Blue, relishes the story of Baker’s response to Wynton Marsalis dissing his musicianship.  “If I could play like Wynton…I wouldn’t,” he replied.

As a person, then, and perhaps as a musician, too, he was pretty iffy, though his last wife, Carol, says: “Chet was a very shy, very generous person.  And very honest, though there are people who would dispute that, but that depends on who they are and what their story is. But to me, painfully honest, sometimes too honest because that made him vulnerable too.” 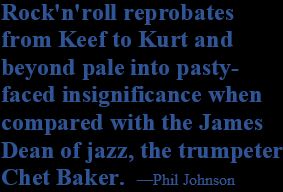 “Vulnerable,” I suppose, though that may be because his music is so laid back it barely seems to have any spine at all. He out-cooled the coolest of West Coast cool jazz, at least in seeming so lackadaisical. He started with what some have described as an “emotionally deadened, high tenor voice,” which others have read as a foreshadowing of the pain that would follow, even if most of it was self-inflicted and felt by others.  “Chet Baker may have been abject,” writes Johnson, “but he liked it that way.”

The emotionally deadened high tenor gave way to a raspy mid-tenor, sometimes seeming so tired that I’ve often thought he’s barely got the energy to care at all.  It’s more haunting, though, and beauty breaks through the deadened emotions enough to transform the not-caring surface of the sound into its opposite: a strange kind of caring, still detached but strong, even committed.  “Teach us to care and not to care / Teach us to sit still,” writes T.S. Eliot in his poem “Ash Wednesday.”  And in Buddhism there’s a strong current of thought about how being detached from caring leads to a caring more true than when you’re attached to what you care about.  It’s strange, I know—and perhaps silly, as I said—to think about Chet Baker’s music this way, though it has often embodied for me how not caring can transform into a strange strength of real care…whatever that means.

You’ll catch a glimpse of all this in the excerpt below.  Though the lively piano and great sliding bass line might fool you for a second into thinking that Baker himself is more lively, that non- or barely-caring voice floats above it, detached, and around the one-minute mark his trumpet takes a slow dive so lazy it’s like he’s just giving up.  That’s when it becomes beautiful, though, and a strange caring shows up.

♦ Go to more Reviews on this site.