This list of Chicago Writers provides easy access to, and an overview of, articles about them on this site.  It’s based on the writers David Starkey and I included in our 1999 book Smokestacks & Skycrapers, and also contains some writers based on my 2006 book Black Writing from Chicago.  Together these two lists will represent one of the best resources on Chicago literature as there is anywhere on the internet.  Go here for the complete Black Writers List.

Supplementing these two lists are five essays—the Introductions, Afterwords and Forewords to Smokestacks & Skyscrapers and Black Writing from Chicago—which  give sweeping overviews of Chicago writing and lament those writers we were not able to include in these two books.  These laments add important names to those listed below. 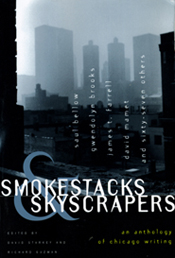 When Smokestacks & Skyscrapers came out in 1999, Fred Gardaphe, editor of New Chicago Stories, wrote:  “Whether it is referred to as a second or third city, Chicago has always produced first-rate American literature.  Smokestacks & Skyscrapers is proof enough that the Chicago literary tradition is alive and well and not just created by tough guys.  A new look for a new century, this anthology demonstrates a joyful and passionate commitment to literary arts that creates a renewed sense of Chicago realism.”

The writers we included in Smokestacks & Skyscrapers are:

This entry was posted in Chicago Writing and tagged Black Writing from Chicago, Chicago Writers, Smokestacks and Skyscrapers. Bookmark the permalink.