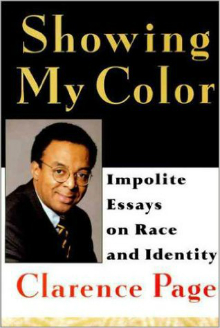 “For better or worse,” writes Clarence Page, “effective politics is often nothing more than an effective appeal to the resentments of those who vote in large numbers, directed against a target group that doesn’t.”  This comes from his essay “Politics: The ‘Race Card’ vs. the Class Card,’” one of the pieces in his 1996 collection Showing My Color.  I excerpted the essay in my book Black Writing from Chicago and return to it over and over now as I observe the 2016 U.S. Presidential race, especially on the Republican side, where Donald Trump’s “appeal to resentments” has been so masterfully effective.  It has thrown “his” party into increasing panic mode.

Trump’s most recent flap—in a campaign seemingly based on one flap after another—is his ever so slow refusal—which still doesn’t seem a really clear refusal—to denounce the support of David Duke, the KKK, and white supremacist followers.  The crux of Page’s essay is the relationship between class anxiety and racism.

Even though written in the mid-90’s the essay seems even more relevant now, 20 years later, especially here:  “Today it is easy to see more clearly than ever that behind middle-class anger, whether it is directed against blacks or taxes, is a greater problem afflicting the group Secretary of Labor Robert Reich called the ‘anxious class.’ They are the vast numbers of Americans who see and feel a growing divide between rich and poor, skilled and unskilled, the secure and the insecure in post-industrial America. They have been feeling increasingly nervous about the trend, which appears to be irreversible, and about the weak responses both major parties were making to it…This middle-class anxiety explains why party loyalty shrunk to record lows by the mid-1990s and the urge to find alternatives soared.”  The last sentence explains not only Trump but the surprising success of Bernie Sanders, so that this election cycle features “radicals” on both the right and left as prominently as it ever has in American electoral history. 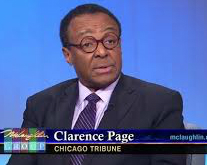 Though Americans would rather talk about anything but race—talk about it directly and constructively, that is—it remains an underlying obsession.  Page focuses on Gen. Colin Powell as a figure trapped between America’s denial of race and its obsession with it.  “Powell’s emergence benefited mightily from a national yearning for heroes and ‘outsiders,’” he writes—the “outsider” part having grown more relevant over the past two decades.  Powell “embodied more than any other black hero or celebrity,” Page writes, “the nation’s yearning to transcend its agony over race.”  He was needed, says Page, “to assuage white guilt,” and make it possible “for white Americans to say confidently, No, I am not opposed to all black candidates; I am only opposed to those black candidates who are not like Colin Powell.”  Or Barack Obama?  Many saw his election in 2008 ushering in a post-racial age, a view many still cling to but history has amply disproven at every turn.  His elections, in fact, ushered in a new age of blatant racism, though the effect may be that more Americans are finally dropping their post-racial fantasies and seeing racism as the powerful, pervasive, insidious thing it remains in American society.  That sharpened perception could lead to better days.  In 2004 I published an essay titled “Miscegenation and Me,” where I said I thought we were entering a truly hybrid, multicultural age.  I said that age, however, would be preceded by a huge white backlash, a backlash we see almost daily on some campaign trails.  In a post on February 27, 2013, I reported on a similar idea from Chris Rock. And this morning brings an email from Sojourners magazine with the sender/subject line being: “Jim Wallis: This is the death knell of white supremacy.”

Clarence Page’s essay probes the intersection of race and class, and comes down, mistakenly I believe—even as powerful as the essay remains—on the side of class.  It ends:  “As long as race remains an American dilemma, as Gunnar Myrdal famously declared it to be in the early 1940s, it will play a salient role in American politics. Americans of all races need to learn who their real enemies are.  It is not the members of other races.  It is those who use race as a smokescreen to hide the nation’s deeper agonies over class and a dream of upward mobility that for too many members of all races appears to be rapidly slipping away.”  But race isn’t just a smokescreen because race and class still remain so tightly joined.  White supremacists, so often in the lower classes themselves, want blacks, other people of color or whatever orientation threatens their view of themselves, to remain firmly in a class apart—and preferably below.  But, as I cautiously suggest above, things could be changing in ways that weaken race and class’ tight bond and finally confirm Page’s assertion that class, not race, is the real issue.

Page remains one of the country’s most distinguished journalists.  He is the Washington-based senior correspondent for the Chicago Tribune, and spent many years working in print and TV journalism in Chicago becoming, in 1984, the first black on the Tribune’s editorial board.  He is an essayist and panelist for PBS’s News Hour and a frequent guest on The MacLaughlin Group and other TV news programs.  His writing appears in many newspapers and magazines including The Wall Street Journal, Washington Monthly, the Chicago Reader, New York Newsday, and The New Republic.  Besides an Illinois UPI Award, an E. S. Beck Award for overseas reporting, and the 1987 McGuire Award for his columns on Constitutional rights, Page won a 1972 Pulitzer Prize as part of a Tribune task force on voter fraud, and the 1989 Pulitzer Prize for commentary.

♦  Go to a list of Black Writers on this site, to the Teaching Diversity main page, and to Black Writing from Chicago.