Posted on September 8, 2016 by Richard Guzman

This post is part of a series consisting of excerpts from a journal I keep reflecting on loss, healing, change, and other adventures, usually during the few summer weeks I spend in Sedona, AZ.  Links to the LEAD POST and to Emmanuel House—an organization started by Rick and Desiree Guzman as a living memorial to Bryan Emmanuel Guzman (1985-2006)—are at the bottom of this page.  In 2016 Emmanuel House was named one of the “Top 100 Most Innovative” social change organizations in the world.

August 1:  Everytime North Central College says I can have an anniversary gift for working there so long, I seem to need a bike, and so this morning I put together my third gift bike, which I had the college ship to Sedona, and, after a stop at Absolute Bikes and the Village Ace to buy a helmet and a lock and chain, pedaled to Bell Rock, a place our family refers to as Bryan’s mountain. 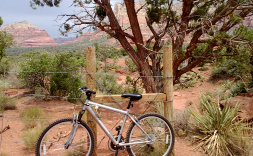 This past February my Mazda Protege was blown to bits by a Dodge Ram truck.  The driver didn’t see me and another car stopped at a red light and, as the police said there was no visible sign of breaking, she probably hit me going around 40 mph.  It’s taken five months and eight days to finish this first phase of rehab, and as I write this my back and left shoulder still feel a nagging, sometimes stabbing pain.  No more car, so I flew to Sedona.  That’s why, for the first time, I had to bike to Bryan’s Mountain.

I guess I’d dimly noticed that you drove there on some kind of upward incline.  The bike ride made that incline real for the first time.  Even the lowest gear had me struggling, so I actually just walked a half mile of it, arriving hot and exhausted with a trek up the mountain ahead.  I was so tired it took me until about half way up to realize my head was down, eyes scanning only a few feet ahead.  I looked up then, realizing I was walking through one of the earth’s most beautiful landscapes.

I slowed down, opened up to this land that always seems new, and thought about seeing Bryan’s tree again for the first time in a year, as I had seen it five first times since we’d spread ashes under it.  After we spread them I remember breaking down in the car, sobbing to Linda that at least we could put some of his ashes here, where it was so beautiful.  I was also starting to remember what I had felt some of those other five first times, but suddenly, after the steepest part of the climb, there it was off to the right about twenty yards away.

Seeing the tree again was as different this time as the five first times before, but for a reason so surprising I started almost shouting to myself words like, “Wow! Wow!” “Bry, look at that!” “What do you know! What do you know!”—this last, I thought in the moment, making me sound like Jimmy Stewart gushing over something in It’s A Wonderful Life.

One of the agave plants surrounding the tree had blossomed.

Agaves are sometimes called Century Plants because they supposedly blossom every 100 years.  It’s more like every 25 to 40 years, actually, and when they do they throw a thick stalk 10, 20, even 30 feet up in the air…in days.  The stalks, topped with hard yellowish pod flowers, have been known to grow as much as an inch an hour, so the sight isn’t just rare and auspicious, but also wildly surreal.  This stalk at Bryan’s tree is shooting up from a plant no more than four feet in diameter, but it’s already at least 12 feet tall.  Give it, say, three-four days, and it’ll probably top out at 15-18 feet.

The plant blooms once, then dies, so the event is tinged with sadness, even though this blooming will produce many offshoots.  I kept hearing George Harrison’s “All Things Must Pass” even as I kept whistling in my head, happy in wonder.

In Arizona it’s illegal to cut down a blooming agave.  And while many will never see a bloom (even some who grow agaves), this is the second I’ve seen.  A couple of years ago one went off just a few yards east of Bryan’s tree.  The ten-inch round stalk I measured after a high desert wind had blown it over had almost gotten to 20 feet.  I cut off a few of its pods then, which now sit in a pottery jar in our Sedona living room.

NOTE (originally written 9/29/12): “It was an extraordinary year for century plants on Bryan’s Mountain. I counted six more blooms, two lower down, and four circling the mountain’s north side above Bry’s tree.”  Update: Go Here for a 2013 journal excerpt which, towards the end, contains a story and picture of an agave bloom I snuck from the mountain and put up in the condo.

— Go to the main pages for Sedona or for Emmanuel House —