August 5:   Linda and I switch optimist/pessimist roles when it comes to whether Bryan’s tree is doing better or not.  She thinks it looks better each year.  I don’t.  Certainly still a solid little tree, its branches seem to grow by fractions of an inch annually, but to me they also seem fractions more bare, especially on its south side.  A slight anxiety tempers my joy when I see it the first time each August.  I walk around it surveying its condition closely.  I look under it to see whether I can still see some of the ashes we scattered under it now more than six years ago.  Mountain wind and rain carry more away each year, and this year for the first time I had to look very close to see what’s left.  Then I sit down on the rock just to its left and soak in the peace of being by the tree again, seeing the valley below, being surrounded 360 by stunning red rock mountains, and feeling my son’s presence so strong here somehow.

Last year the intense quiet of this first meeting was disrupted because one of the agave plants lying close to it, half underneath it, had bloomed, shooting up a 14-foot stalk. This year the agave was in process of decay, its stalk broken off about four feet from the ground, giving the tree its normal profile back.  I sat peacefully, facing slightly east, thinking nothing could be as surprising as that bloom again, when the peripheral vision of my left eye suddenly sensed small rock piles about 20 feet away.  I turned slowly.  There were three piles, stacked like small cairns about a foot-and-a-half high.  No, there was also a fourth pile, a smaller one in the middle of the three, all four surrounded by what appeared to be randomly scattered rocks.  But as I stood I saw the rocks weren’t random at all.  They were arranged as three interlocking circles, all together about 15 to 17 feet across, the three larger cairns standing at the points the circles intersected on the inside, the small one standing in the middle of it all.  Last year when I saw the agave bloom—a “century plant bloom” they call it—I started shouting right away.  I wrote that I felt like Jimmy Stewart whooping it up about something—Zuzu’s petals, for example—in It’s A Wonderful Life.  This year a slow wonder came over me, until it seemed my whole being was amazed. 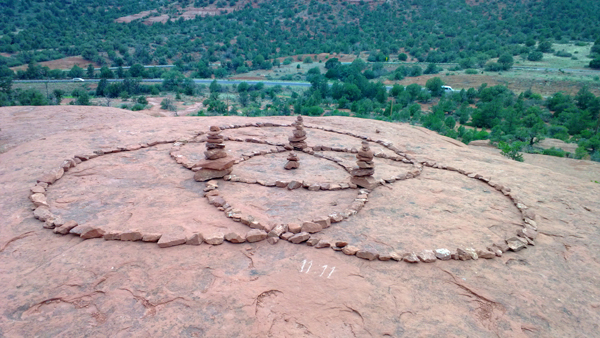 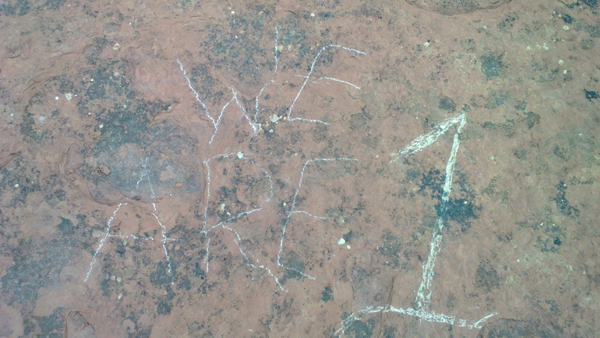 Under normal circumstances—especially in Sedona, where New Age loopiness often intrudes—I might have seen the whole thing, especially the words, as corny, sentimental, hopelessly romantic.  But even writing this now, the wonder, the sense of being next to something genuinely powerful and peaceful, does not recede.

The interlocked rings go by many names, from “Trinity Rings,” which leans them towards Christian mysticism, to “Bonham Rings,” as in drummer John Bonham, which leans them towards, well, Led Zeppelin!  Leaning towards math (though it’s not quite the same), some call them “Borromean Rings.”  These consist of three interlocked circles with paradoxical  properties.  Removing any one circle results in two unlinked rings, so no two rings actually link to each other.  All three together, however, “are” linked.  “We Are 1,” indeed. Even mathematically, the structure remains full of wonder. 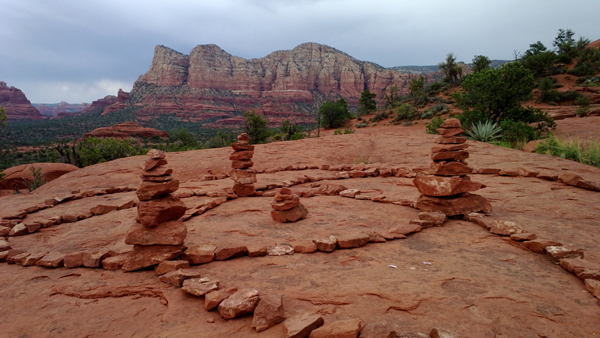 — Go to main pages for Sedona or for Emmanuel House —
In 2016 Emmanuel House was named one of the “Top 100 Most Innovative” social change organizations in the world.