This post is part of a series consisting of excerpts from a journal I keep reflecting on loss, healing, change, and other adventures, usually during the few summer weeks I spend in Sedona, AZ.  Links to the LEAD POST and to Emmanuel House—an organization founded by Rick and Desiree Guzman as a living memorial to Bryan Emmanuel Guzman (1985-2006)—are at the bottom of this page.  In 2016 Emmanuel House was named one of the “Top 100 Most Innovative” social change organizations in the world.

August 7:  Rain and wind all day Tuesday, but the Three Circles (see Part 1 of these excerpts) have survived perfectly, only the words washed away.  Also: a new rock piece, a small heart directly in front of Bryan’s tree, “Be Love” chalked in the center.

There are many small cairns on the mountain but most are fallen today.  Those who made the Three Circles placed it wisely.  Situated on a knob about 20 yards west of Bryan’s tree, the area, while naked to winds, is immune to flood washes of any kind. 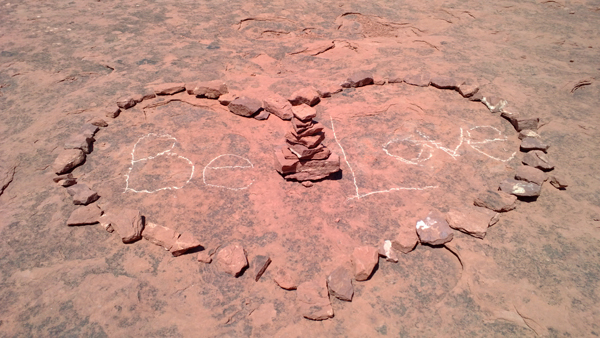 August 9:  For me Bryan’s Mountain may be the most peaceful place on earth, but there’s also always this tension between time and eternity up there.  Looking at some of the still-forested hills around Sedona, I often say to Linda, “10,000 years will sweep all that away, and we’ll have more red rock mountains.”  Maybe tens of thousands, maybe millions: close enough to qualify as eternal.  Bryan’s tree is dozens of years old but will not see those mountains stripped down to the beautiful bareness of Bell Rock, Court House Rock, Castle Rock, and all the rest today.  Bryan fell three years short of seeing two dozen years.  And me?  Will I have the privilege of becoming too old to make the climb all the way up to his tree?

How long will the Three Circles last?  Will those who made it come often to repair any damage nature or careless people inflict?

I watch many climbing the mountain.  Some come bare-headed, some men even bare-chested, but today I saw a young Japanese mom trailing behind her husband and children wearing a hat super-shielded against sun and wind.  White and extra-wide, fabric on the back also draped over her neck, and on both sides of the large front bill two stiff half-circles hung down like horse blinders.  But nothing can shield you from time.

August 14:  Today I see the small heart has been destroyed.  A big rock lies in the debris, as if someone took it and started smashing.  Maybe someone newly disappointed by love, I think.  The chalked words “Be Love” have also been roughly rubbed out.

Then two brothers, Daniel and Diego, appear and ask me about the Three Circles.  I explain and also tell them why this space around Bryan’s tree is almost sacred for me.  To be polite, they’re quiet for a moment, but I feel their bubbling enthusiasm for life.  “Our mother is from New York, our father from Peru, and we’ve decided to move to San Francisco and live the American dream!”  Apple has transferred Diego there, and Daniel starts medical school there in September.  They ask me to take their picture, and I take one, too. 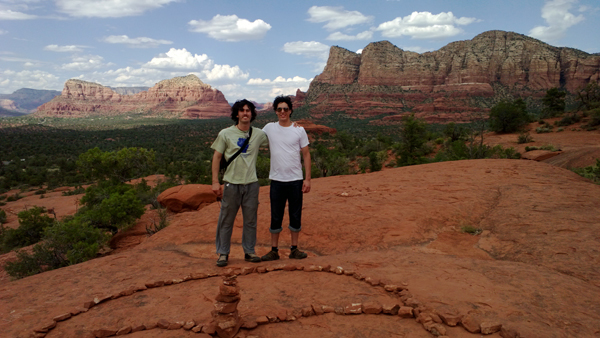 August 16:  It’s partly because I’m so focused on Bryan’s tree, but on many trips up the mountain I notice something so obvious I wonder how I could have missed it.  In my August 5th entry, I mentioned that the top of the agave bloom stalk had been broken off. Today I saw that top jammed at a 45 degree angle into the little tree about 15 feet to the left of Bryan’s.  I thought, Maybe Bryan’s tree is special to someone else—maybe many others—and he or she thought the dead stalk spoiled the tree’s look. The decaying plant still left isn’t too scenic either, but at least there’s not a 14 foot stalk shooting up.

From the beginning I had the feeling I shouldn’t stay long on the mountain today, that there was something I had to do.  At first I thought I’d bring a pair of sheers and snip off some of the stalk’s branches for souvenirs.  Then I thought, Why not take it all?  It’s illegal to cut down a blooming agave, but this stalk had been broken off for months and all the seeds were gone.  I grabbed the whole 10-foot thing and took off.  Slightly hunched, I scurried down, shifty-eyed, like a guilty cartoon thief.  I planned to casually throw the stalk over the wire fence lining the path down to the parking lot if rangers or park police spotted me.  Coming to the lot, I paused, checking for any approaching police, then sprinted to my car, popped the trunk, and jammed the stalk in.  One of the back seats had been laid down, but still it was too long.  Dozens of pods were breaking off.  I flung the passenger door open and pulled it the rest of the way in.  I shut the trunk and try to return to looking calm and normal.  Still, I thought, What if I get stopped?  Would I say, Officer, I wrote about this stalk last summer.  The excerpt is on my website at https://richardrguzman.com.  Putting things online changes the nature of writing this journal.  More pictures, for one: 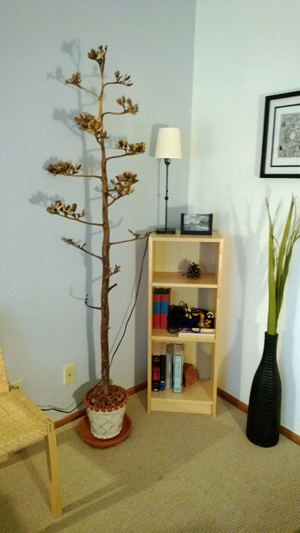 The stalk in a pot of red rocks.  Three feet sawn off, but still magnificent.

August 19:  First trip to the mountain on bike this year. Not as hard as the very first time I biked last year because I knew what to expect.  It’s also not the biking but all the walking with the bike that really tires me.  Yet the trail from the south parking lot around the west side of the mountain is so difficult in spots I think walking the wiser choice.  I’ve seen real mountain-bikers chugging up everything the mountain throws at them, but I’m not real like them.  Later at the pool a young lady says her boyfriend tried to bike it but finally gave up.  “In the car it seems flatter,” she says, “and you never notice that you just keep going up and up.”

I take a different route back. The trail down to the north parking lot could be exciting if, again, I were a real mountain biker.  It has many ripples, like speed bumps, that send me into half-flight even though I break a lot.  If I weren’t breaking, Wow!

After that there’s a slight climb out the lot, then a hard 200-yard climb as you turn left onto Highway 179.  Today as I turn, I see a young Japanese man slumped, totally exhausted, over his bike handle bars, panting as he surveys the steep yards ahead.  After that 200 yards, though, it’s just speed.  Too much for me.  All the way I brake and sit up tall in my seat so I become a sail brake.  It takes 40 minutes to ride and walk up to the mountain, but only 15 to careen back, probably under 10 if I weren’t breaking so much.  Today I made it back home—just over two miles—pedaling only eight times, and all eight were when I was already on the walkways leading right up to my front door.  (See a video of this bike ride HERE as part of my 2016 excerpts.)

Before I started back down I took this picture of my bike against the fence I lock up to.  It looks like a Photo-Shopped postcard, but I didn’t do anything but snap.  Here, amazing light, always. 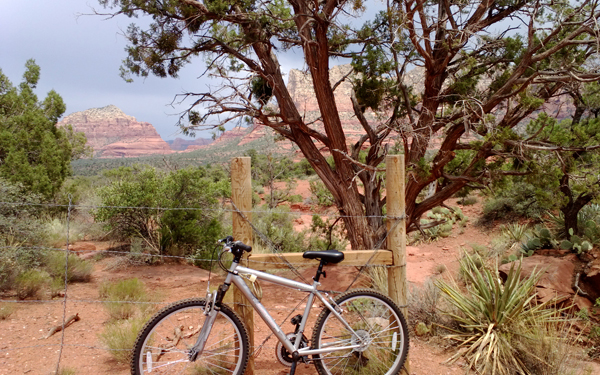 — Go to main pages for Sedona or for Emmanuel House —