Always something new on Bryan’s Mountain.  In 2012 there was the agave bloom, and last year I wrote about someone using red rocks to make a large “Trinity” or “Bonham” or “Borromean Rings” formation right next to Bryan’s tree.  Here’s a view of how that looked last year: 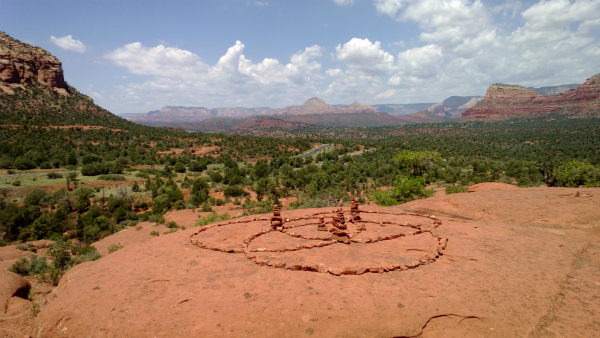 And here’s the view this year: 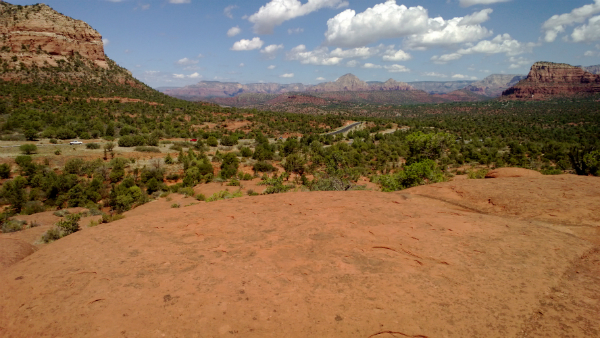 The formation is gone.  I think I see more red rocks scattered around—perhaps the remains of the formation?—but it’s impossible to tell, really, and the small knob they were on is completely clear.  I had not expected it to still be there this year.  When I saw it was not, I thought immediately of the Tibetian Buddhist ritual of creating intricate 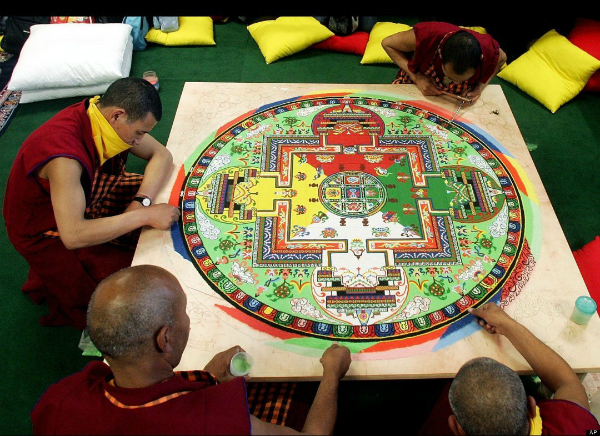 mandalas from colored sand.  They take days, sometimes weeks, to build.  As a sign of the impermanence of all things, however, they are usually deconstructed within hours, sometimes minutes, after completion.  They are blown away, or, more often, ritually disassembled—images and patterns brushed away in specific order, sand collected in specific piles before being ceremonially taken away to, say, a river and poured in, returning the grains to nature.  (Go HERE for more on sand mandalas and to see various videos of their making on the web.)

Bryan’s tree still looks good, but searching the ground beneath its branches where we spread some of his ashes I could see none of them for the first time since we placed them there in January 2007.   I had been surprised to be able to see them when we returned that summer.  I had been more surprised to see them, though fewer, the following summer, as I kept seeing them, though fewer, in the summers of 2009, 2010, 2011, and 2012.  Last summer I still saw them, though now just a very few, so I was not surprised to find them completely gone this year, at least to eyes just peering through the shadows of tree branches.  It was not a sad thing.  I thought again about the Buddhist sand mandalas.  I thought of the seven-and-a-half years I had had to be surprised by the quiet persistence of ashes. 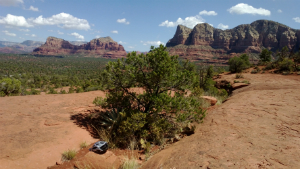 For many reasons I had been thinking for weeks about what I said when we spread his ashes those years ago.  I will have to go back to the video I took to get the exact words.  I was panning my old camera around, trying—and failing—to capture the magnificence of the view and remember spontaneously saying something like, “My son, may the beauty of this place be one with the beauty of your spirit as long as the earth endures.”  That I did not see the ashes anymore does no harm to that sentiment, nor to the years I had to be Bryan’s Dad.  Impermanence, all, including the earth and these stunning red rocks.  Gate, Gate, Paragate, Parasamgate, Bodhi svaha, goes the great sentence in the Heart Sutra, one of Buddhism’s central texts: “Gone, Gone, Gone Beyond, Gone Utterly Beyond—Oh what Awakening!”

So this year what’s new has been things that aren’t there. Usually, I meet people wanting to talk, ask questions, share their joy at climbing the mountain and taking in the views.  That’s also been absent so far.  Plenty of people around, just no conversation.  It’s ok, as are the absences and the perception of impermanence.  The chaotic surfaces of Bryan’s death have calmed somewhat, as has the tumultuous sadness, though these have aged into a deepening regret.  We move towards declines, but towards certain increases as well.  I look forward to climbing up to Bryan’s tree with the grand kids some day not too far away—an increase in pleasure, for sure—and my slowing pace should match their small legs fairly well.  Perhaps they will be able to catch some of Bryan’s spirit up there, but none of them will ever, ever have met him in the flesh.  It will be hard for them to pin whatever they do catch to someone who once saw this scene, this tree, himself, and would have loved them like only he could have loved them.

♦ Go to the Lead Post in the Climbing Bryan’s Mountain series.

♦ Go to the main page for Emmanuel House.  In 2016 Emmanuel House was named one of the “Top 100” social change organizations in the world.