This is part of a series featuring excerpts from a journal I keep on my time in Sedona, AZ, especially up on Bryan’s Mountain (Bell Rock to the rest of the world).  I put some of my youngest son Bryan’s ashes there under a tree in January 2007.  In 2016, Emmanuel House—the living memorial started in his honor by his oldest brother Rick and his wife Desiree—was named one of the “Top 100 Most Innovative” social change organizations in the world. Emmanuel—“God with us”—was Bryan’s middle name. 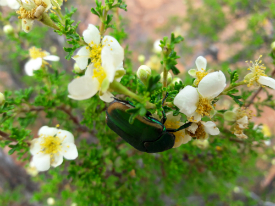 August 15.  This year, as part of his plan to be in the Zone of Totality for the eclipse, Aaron and family were in Illinois till August 12th, so I put off my trip out West until August 11th, flying first to visit Daniel’s family in Scott’s Valley, and not getting to Sedona until the evening of the 14th.  Today, therefore, is the latest day in August I’ve ever gone up to Bryan’s tree. My first Sedona picture is usually of his tree, but today as I spotted it in the distance my eyes were drawn to a bush about 40 yards before it. I know it well, but this year it was flowering more profusely than ever, and I stopped to take pictures of it, the one here featuring a bronze beetle climbing all over. Someone said it’s been a vigorous monsoon season, the flowers thick on this bush being proof.  We often use grasses as a symbol for transience: they blow in the wind and are gone.  But the grasses around Bryan’s tree, and especially the rock next to it, are thicker and taller than ever.  I think of Lewis Thomas’ first essay in his great book The Lives of a Cell.  “There is nothing fragile about the life on earth,” he writes, commenting on man’s tendency to imagine that he’s above nature.  “We are the fragile part,” he continues, “transient and vulnerable as cilia.” 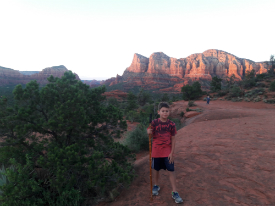 August 24.  We’ve dreamed for years of beginning to bring the grand kids out to share a week in Sedona with us, and 9-year old Liam, the oldest, was the first. He and Linda arrived on the 17th.  I’ve learned not to paint pretty pictures in my mind of the way things should go. You think kids—or anyone, really—will enjoy this hike, this restaurant, this song, etc., and they don’t, don’t, don’t. So I was hardly surprised when things didn’t seem right from the start.  Not that Liam didn’t enjoy most everything we did and call this the best vacation he’s ever had, but he also coughed and sniffed and went in and out of fevers.  We thought at first it was only him trying to adjust to this arid climate, which so many have problems doing, but this went on so long after we had gotten some nasal spray, nasal gel, cough drops, and more ibuprofen, that we finally spent about 3.5 hours at urgent care four days ago. They did a quick strep test just to make sure, and it came back negative.  But today Linda, calling from New Jersey just before flying back here, said the clinic called her saying the back-up culture they did came back positive!

Strep didn’t seem to hinder his enjoyment of the solar eclipse, which we experienced together at the Chapel on the Rock, where people shared their eclipse glasses with us to supplement the pin-hole viewers I had made the night before. (The glasses are SO much better.)  The family texted back and forth the whole time.  Aaron sent a shot right away and texted, “Wait til you see the others,” to which Daniel texted, “Did you crush it, Aaron?”

The next day we saw Meteor Crater, and the next the Grand Canyon, and Liam seemed duly impressed, though he still coughed what I thought was a deep cough, and his voice got so scratchy he was reduced to whispering.  “I kind of like it like that,” said Linda, who was met with a croaking, “Grandma, that’s rude!” But what he seemed really into the whole time was rocks.  He looked for them everywhere, and we visited three of Sedona’s fanciest rock shops, marveling over their prices. A day before our urgent care trip, Liam perked up from a fever episode when we stopped at a less expensive one, the Village Rock Shop just a half-mile from our place.

I’ve been thinking a lot about connections. Connecting to the first grandchild to visit, of course, but others, too.  On the shuttle ride up from Phoenix Sky Harbor to Sedona a young woman described how she’d had a tarot card reading, then headed up to experience the supposedly powerful vortex energy of Bell Rock.  As she started the main trail, a man suddenly appeared, pointing to a trail he said she should take so that she would arrive to find the exact kind of peace her tarot reader said she was after.  “One of those Sedona stories,” she said.

A famous saying here is, “There are no ‘coincidences’ in Sedona.”  Like today on Bryan’s Mountain I met a young couple from New Jersey just as Linda was flying back from there after taking Liam back home. Or even closer: on August 15th, the first time I went up to Bryan’s tree, I explained a “century plant bloom” to a couple, then when they said they were from Chicago, I asked, Where? And it hardly ruffled me when they said, “Naperville.” Nor did it surprise me that the woman drives by our old house twice daily on her way to and from work.  (Her husband grew up in Oak Park, every day walking past the Frank Lloyd Wright Home & Studio where Linda now works.)

We just moved to Aurora a few months ago, so this year, sitting by Bryan’s tree, I’ve thought that it feels like my most solid home in the world, the geographical spot I most connect to.  I loved our old house in Naperville, and the neighborhood, too, with my bank a block away, and a Trader Joe’s two blocks away, and friends in each place. I’m lucky to have lived in such a beautiful space—our Naperville mid-century modern designed by Don Tosi—and now another one, a historic “farm house” just a door down from another beautiful mid-century modern, next to which is an original Frank Lloyd Wright house. Still, I haven’t quite connected to the new neighborhood, and, because I’ll still be at North Central College another year-and-a-half, I’ll sneak in as many trips to my old bank and my old Trader Joe’s as I can.  And I hope to finally take a picture of a house just about four blocks from our old house, and send it to the owner of the Village Rock Shop.

A couple of years ago I talked to Michael Silberhorn for the first time.  Just the usual Sedona conversation, full of coincidences.  First we determined that we either now lived, or used to live, in Naperville, not just in the Chicago area. “Where in Naperville?” Michael asked.  “On Gartner and Laurel.” “You mean in that house with the big prow window?!  I saw it every day at school.”  Turns out he grew up with his grandparents just four blocks away.  He smiled at the remembrance of Elmwood Elementary just a block from Gartner and Laurel. I turned to another couple in the store, half shouting, “You probably live in Naperville, too!” to which the woman said, “No, Peoria. But my boss graduated from North Central College!” This year, Michael turned a rock over in his hand a few times and said—almost mused—“I think I can do $30 for this one,” giving us a very good deal on a very unusual quartz crystal Liam and I had spotted.  “When I grow up,” said Liam, “I want to play hockey and own a rock shop.”

♦  Go to the Lead Post in the Climbing Bryan’s Mountain series.