I have never done a “What I Did on My Summer Vacation” video.  Until now.  The VIDEO BELOW shows about 3 minutes of a month-long stay in Arizona and California, where we worked on our place in Sedona (it gets deep-cleaned only once a year!), drove nearly 2000 miles visiting family (especially the grand kids) in California, and tried to relax some and enjoy the sights and sounds along the way. 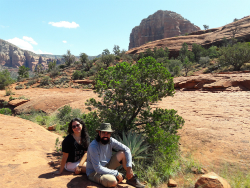 The Arellano’s at Bryan’s tree.

We talked some about possibly leaving Sedona one day, maybe leaving everything in Arizona for a place in California closer to family.  We found, however, that what we could afford was probably just a trailer in a crowded trailer park.  It’s true what they say about California property: way, way, way through the roof.  We don’t know how a normal, young family can finally afford to stop renting.

In Sedona we also had a visit from some friends, the Arellano’s, who were on their way to a new life in Nevada.  It was a treat to show them around, if only for a day.  They were both great supporters of Emmanuel House, the organization Rick and Desiree Guzman founded in memory of the youngest of the family: Bryan Emmanuel Guzman.  Obe and Jacque asked, “What was Bryan like?”  We enjoyed answering that most of all, including climbing up Bell Rock—what we call Bryan’s Mountain—to Bryan’s tree, a small pine we placed some of his ashes under shortly after he died. 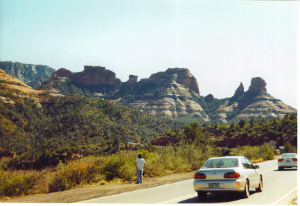 Bryan asked us to stop so many times on our first trip to Sedona. Here he checks out formations just across from Midgely Bridge.

The video shows pictures of the Arellano’s at an overlook on the way to Flagstaff, at Midgely Bridge, and on Bell Rock at Bryan’s tree. It begins with my first glimpse of Bryan’s tree this year, shows waterfalls pouring off Bell Rock when the monsoons returned, and ends with some wonderful music at a Sedona institution: Tlaquepaque.  There’s “flamenco” music there three times a week during the Summer, and Jacque made us promise to go before she and Obe left for Nevada.

♦  View or download for free Remembering Bryan, a small book of pictures and thoughts from family and friends.

♦  Learn more about Emmanuel House (now The Neighbor Project), and it being named one of the “Top 100 Most Innovative” social change organizations in the world.

♦  Go to the Lead Post in the series Climbing Bryan’s Mountain.