This is part of a series of excerpts from my Sedona journal, especially about my time on Bryan’s Mountain (Bell Rock to the rest of the world).  Go to the series’ Lead Post, and read about Emmanuel House, the living memorial started by Rick and Desiree Guzman to honor Bryan Emmanuel Guzman. 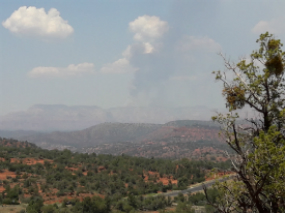 A fire in the distance.

August 5-6.  There’s a “just right” vibe in Sedona, related to that “there are no coincidences” vibe. The people you just “happen to meet,” the Red Rock views, the brilliant night sky—all just right, as they should be, and always are. But this year I’ve been noticing things that aren’t quite right.  Coming into our place Saturday night, I was pleased by how clean and put together it looked—but then, like every year, so many things were just out of place.  The rattan chair was crammed in the fireplace corner, and the fireplace log box belonging there was at the side of the coffee table.  Couldn’t find our guest book for the longest time, until I found it buried beneath three remotes in the remotes box.  The silverware was all mixed up, our primary set stuffed in the back of the drawer, the cheap, second-hand, supplementary stuff in the appropriate slots instead.  And, as always, the towels and rugs were all a jumble, especially the small rugs, which were in all the wrong rooms.

I have still not found the hummingbird feeder.

An Indian man sets up his table of hats next to the head of a trail that winds around Bell Rock and Court House Butte.  He’s been selling there almost as long as we’ve had our place in Sedona, but this year as I stopped to say a quick Hello, he looked thinner, and my Hello brought him out of what seemed to be a stupor.  He recognized me right away, though, saying, “I haven’t seen you for a long time,” but his speech seemed more slurred and low.

…Bryan’s tree looked fine, though it seemed drier.  Everything seemed drier.  The grasses around his tree weren’t as vigorous, and the winds whipped hotter and drier than I ever remembered.  I didn’t seem to be sweating enough, and what I did sweat dried so quickly it hardly cooled.  The usually crystal air and skies seemed hazy.  Then in the distance I saw the culprit: a wild fire burning in some hills way off to the north, white and dark smoke churning upwards.

This has been one of the busiest years of my life.  In a way, we’re still recovering from May 2017, when I was in a hectic teaching term, Rick was running for mayor…and we moved!  The house we bought sold in 8 hours, ours sold in 23, so we threw everything in boxes and whisked it off, no time to sort anything.  Our heads were spinning and haven’t stopped yet.  We just start sorting this July, but not til after I helped build stuff for Linda’s biggest volunteer party of the year, followed days after by the huge retirement party she threw for me. We wall papered, trimmed bushes, tidied as best we could, did food, then at the last minute changed locations because of horrid weather.  I’m not officially retiring until late November, but all the kids were going to be in town late-June/early-July, so we went ahead, and lots of people came, and we wound up absolutely exhausted, crabby, and then entertained our Jersey grandkids, Liam and Maddy, for eight days after that.  People ask me all the time what I’m going to do in retirement, and all I can think of is to say, Rest.  What I’ve described here is less than half of it.

All six + one due in September.

The big payoff was having all the family around:  all six grandkids for the very first time, seven if you count Dan and Tara’s newest…due in early September.  When we took pictures of them, we had Tara there, too, gently cradling her growing belly.  As grand as all that was, it was also tiring, and the kids were tired, too, as they were working on their Mom’s place, getting it ready to sell, and getting her ready to move to a smaller place, something easier for her to handle.

I arrived hugely out of sorts, with a keener eye for things out of place.  Still, it’s not all just a state of mind.  Something else: somehow our swamp cooler didn’t get serviced and turned on, so I bought an extra fan and set up another blowing over a large, wet towel to try to keep the heat down until we can get someone over here.  I can barely keep the inside temperature below 89 degrees, and that wildfire in the distant mountains is as real as real can be. As I write this on August 6th, a smoky haze has drifted over the whole area.

August 9.  Things feeling a little more normal.  For one thing, the very air itself.  The normal humidity in the high desert here is around 30%.  When I arrived on August 4th, and until today, it’s been less than half that!  Sitting up by Bryan’s tree today, I saw no smoke from the distant fire, and feeling the air on my skin, all I kept thinking was, “That’s better. That feels right.”  Aaron asked if I could send him the tree’s exact GPS coordinates.  Sitting by his tree, I did, and heard my phone beep moments after I sent them.  He texted back: “I have been thinking about ways to get a ‘Bryan tattoo’ and I want to just get the coordinates of his tree where his ashes were. A nice way to do one that isn’t cheesy.”