This summer in Sedona I spent most of the time indoors, not out.  Five weeks of 12-hour days rehabbing our small condo after a big February flooding from a burst pipe in the condo upstairs.  I lost 12 pounds.  I also biked up to Bryan’s mountain only twice, and got there only 3 times total. 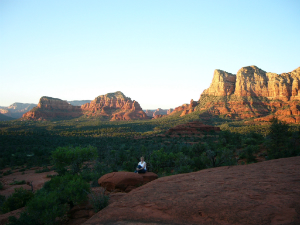 Just a few yards north of Bryan’s tree there’s a big, red boulder with cracks running though it so deep you think it will split to pieces any moment.  Year after year, though, it has remained steadfast.  On one of our earliest trips to Sedona I took this picture of Linda sitting on it.  This year, on Sunday, September 8th, just to make sure I got back to the tree just one more time before I left, I forced myself to stop rehab work for a couple of hours, drove to the mountain, hiked up, and found the big boulder topped with a beautiful rock cairn.  It was a very windy day.  I noticed how immovable the big agave were, but my hiking hat blew off four or five times, and the small mountain trees swayed.  If you don’t pile the rocks of your cairn just right, the wind gets them quickly, but this one stayed solid. 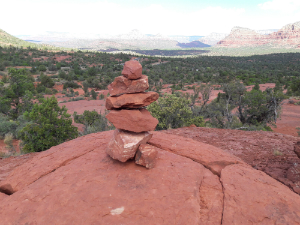 “Official” rock cairns mark the main trails up Bryan’s mountain (Bell Rock), and today when a couple asked me the way up I said what I’d said dozens of times before: Follow the big cairns.  The first one is just around the corner.  They loped off, the woman of the pair heavily tattooed across her back and all down her left arm and leg.  What such marks mark, I usually can’t figure.

The official cairns aren’t piled carefully.  The red rocks are poured into heavy, round, wire baskets about three feet high.  Sometimes a piece of wood sticks out the top, an arrow with the word “Trail” stuck to it.  There’s not much art to these.  To the unofficial cairns there’s often lots of art.  In my 2013 journal excerpt I wrote about some beautiful, interlacing rings someone had made of red rocks just to the left of Bryan’s tree, rings whose major intersections were marked by solid cairns.  I wrote about these rings again in my 2014 journal excerpt, this time to mark their absence, and compared them to the elaborate sand mandalas painstakingly made—then ceremonially swept away—by Buddhist monks. 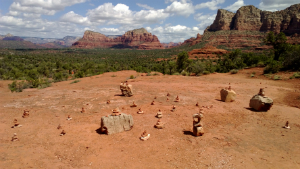 On this Sunday, a big group of teens led by a man, wife, and their dog, appeared behind me as I got ready to leave.  He instructed them to line up here, then move there, as he took pictures and videos.  Then he showed them how to make rock cairns, and some even paid attention and tried them themselves.  In the end, only one remained upright in the wind, unlike this field of small cairns I found, also in 2014.  These weren’t arrayed in any order I could discern, but they were solid, and their numbers seemed to be a mark of something, perhaps even just the joy of being on the mountain for the first time. I say “just,” but when you first catch sight of the breathtaking scene from Bryan’s Mountain, you look here and there and everywhere trying to take it all in.  That fleeting moment, though scattering like this small field of cairns, can stay with you and with you and with you.  2014 was the year my colleague Sohinee Roy and her Mom and Dad (here on their first trip from India to the U.S.) came to visit me in Sedona.  I’ll write in detail someday about our trip to the Grand Canyon.  When we got there the Canyon was blanketed in thick clouds, and we turned away deeply disappointed, wondering why we’d come that particular day.  Until suddenly the winds came and parted the clouds like an opening curtain, and her Dad went running up and down along the rim shouting, “Yes! Yes!”  I’ve never seen the Canyon in a more dramatic fashion.  It’s a vivid memory, a cairn—like Bryan’s tree, like Bryan’s mountain—marking something.

♦  Read Part 1 of the 2019 journal excerpts.  Go to the Lead Post for the Climbing Bryan’s Mountain series.

This entry was posted in Family and tagged Climbing Bryan's Mountain, Sedona-Arizona. Bookmark the permalink.