This is part of a series of journal excerpts reflecting on loss, healing, change, and other adventures, usually during the few summer weeks I spend in Sedona, AZ.  The journal revolves around the loss of my youngest son, Bryan Emmanuel Guzman, and the mountain I climb in his honor.

July 29:  My first time to Bryan’s Mountain (Bell Rock) this year—but I have been here in Sedona since July 20th.  Never before have I waited so long to bike and hike up to this place, a place as sacred to me as any other in the world.  But I was, and am, involved in what my brother-in-law Danny Miller has called the project from hell.  In late February we were, for the third time, flooded by a pipe leak from the upstairs condo, so I came two weeks early to start replacing all the flooring, base boards, and trim to try and make up for some of the money we lost because insurance didn’t cover everything.  The $1515.18 for mold remediation, for example; or the many $100’s extra we paid for alternate housing for our renters while our place was being dried out, un-molded, and wall board and flooring ripped up and partially replaced.

From the beginning it’s been Murphy’s Law x 10.  That’ll teach Danny to volunteer to help me for a week, though he’s closer to sainthood now for sticking with me while everything took 3, 4, 5x longer than it should have. Like the self-stick tiles.  I put them down a dozen years ago and thought, since they periodically came loose in our former Naperville house, they’d come up fairly easily. They didn’t. The incredible effort it took to pry them up was the least of it. The adhesive wouldn’t go away no matter what we tried.  Finally, it took a heat gun and scraping and scraping and scraping before I finished off by just pouring lacquer thinner all over, an act that had me so gassed—not just bone tired, but woozy—I had to buy a respirator mask.  Grinding down high spots in the concrete floor just took a normal dust mask, but it took a 3-hour round trip to Prescott Valley to rent a grinder, then 5 hours of grinding, and a 3-hour round trip to return the grinder.  The concrete dust?  I don’t know if we’ll ever get rid of it all.   Then the night before we were to lay new entryway tile, it started leaking from upstairs again!  Two plus days more delay as we stopped the leak, contacted the owner, and waited for things to dry out.  Etc. Etc.

It’s all crowded out the time I had to be on Bryan’s Mountain, and now well over 350 words into this journal entry and I haven’t even mentioned what it was like to be up there today and next to his tree.  When Aaron saw it the first time he said, “It isn’t in a lonely place.”  No kidding, at least today.  Sometimes I get long minutes sitting next to the small pine, looking, thinking, and remembering, but today people seemed to swarm the mountain, like the six guys I snapped a picture of as I was leaving.  There were perhaps 15-20 more besides them, their talking and laughing making me turn every few seconds.  In a way, I didn’t mind.  The tree isn’t in a lonely place, and the crowd seemed a perfect metaphor for the things that have crowded into the time and peace I thought I’d have since I sort of retired in late 2018.  I don’t think I’ve put together two days of peace and quiet since then, and that super-crowded feeling has only reached a peak—at least I hope it’s a peak—in the rigors of this condo rehab.  Always perspective.  “It is a First-World problem,” Linda said, and when I look at the dirt and chaos still around me at the condo I think, Of course, it’s not a refugee camp. 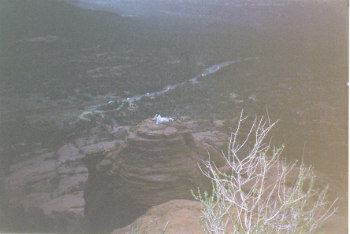 The six guys stood by Bryan’s tree a long time.  Perhaps they were captured by the gorgeous play of sun and clouds on the mountains and mesas in the distance.  They couldn’t know what it meant to me and my family, but even in a crowd there’s something deep there, something that holds you.

Just after we bought our place we did our first rehab, one considerably easier than this one. We brought Bryan and his step-brother Mike to help.  They worked for us until 1:00 p.m., then were free to do whatever.  One afternoon they climbed Bell Rock, staying til dusk, and Mike—climbing one spire higher than Bryan—snapped this picture.  Bryan seems so still, held there, just sitting and looking.  I mentioned in an earlier journal entry that he seemed turned in the direction of the tree where we placed some of his ashes in January 2007.  Bryan’s tree on Bryan’s Mountain.  The picture, dusky and grainy, captures a feeling, an idea, a memory that has the power to make me be still, quiet, and feel held, no matter how crowded life becomes.

♦  Read Part 2 of the 2019 journal excerpts.  Go to the Lead Post in the Climbing Bryan’s Mountain series.  One of the posts, Here, has a video of my bike ride up and down the mountain.  Also, go to an article about Emmanuel House being named one of the Top 100 Most Innovative social change organizations in the world.  Bryan’s oldest brother Rick, and his wife Desiree, started this organization as a living memorial to Bryan, who died in 2006, shortly after his 21st birthday.  Emmanuel, “God with us,” was his middle name.  In 2018 Emmanuel House (which started simply as Bryan House) merged with long-time partner the Joseph Corporation to become The Neighbor Project.  These organizations help working families escape poverty, a project we know Bryan would have loved.  What started by serving five families now serves around 3,000…and growing.