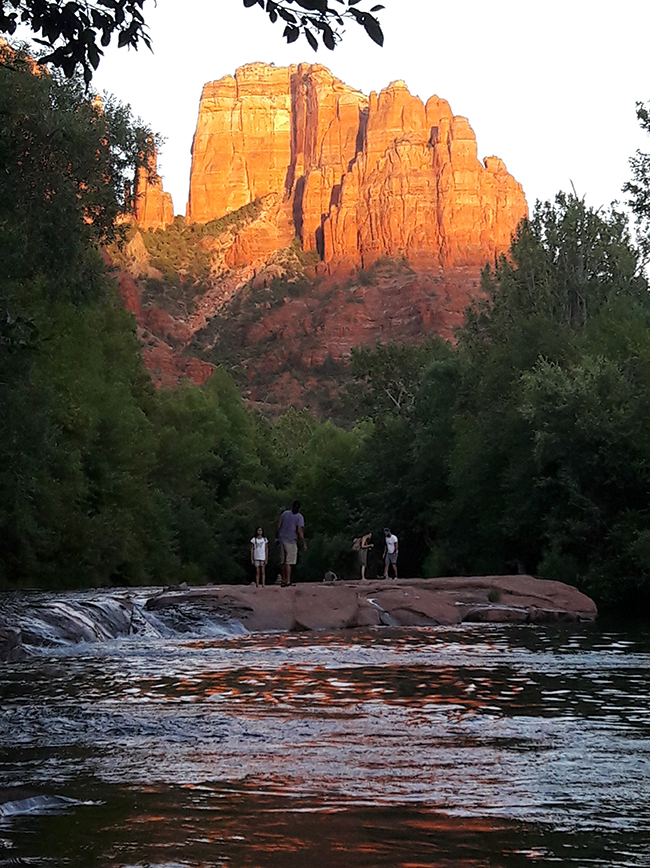 This isn’t a picture on Bryan’s Mountain (Bell Rock), but another place in Sedona: Red Rock Crossing, what some have said is the most photographed spot in Arizona.  You can see why.  That’s my son Aaron looking up at Cathedral Rock, and grand daughter Grace looking my way as I snapped the picture.

A few days earlier, on June 14th, she was the second grand child to climb Bryan’s Mountain and visit his tree.  I’m so looking forward to having the other five do that soon, though for Adderly, the youngest at almost two, that might be a few years off.  And just like last summer, it was a while before I climbed the mountain myself—though for far different reasons than last year’s.  We arrived on May 6th, but it was over a month before I went to the mountain for the first time on June 8th.  Because of the Covid-19 crisis, the Bell Rock trail was closed until May 15th anyway, and then on May 11th, the day after Mothers’ Day, my Linda fractured her ankle, falling on a new trail we were hiking, the Transept Trail, one of the ones that remained open because it was new and still not crowded with people.  We were almost finished coming down when she slipped on loose earth, bending her right ankle behind her as she fell.  At first we thought it was just a bad sprain, but when we went to the Sedona Medical Center the doctor on duty said right away, before any x-rays, “Oh, it’s broken.”  Linda got called a real bad ass for hiking out the last quarter mile.  Two days after surgery she also found she had lost her job at the Frank Lloyd Wright Trust, one she dearly loved and was so great at. That put the fractured ankle in perspective.  As the pandemic has put many things in perspective, upending the worlds of so many.

As did the killing of George Floyd.

In early February, I spoke at the Laity Convocation of the Northern Illinois Conference of the United Methodist Church.  The theme was Unpacking Racism, and I said that IF we worked diligently on anti-racism we might see a less racist U.S. in 40 to 100 years.  One other panelist said that though he respected me, he thought I was being too optimistic.  I was.  But the protests have given me some heart.  Though very little new has been said that hasn’t been said for many, many decades—even for nearly 200 years—at least people seem to be listening, finally. White people talk more about white privilege and systemic racism than they ever have, so I feel more confident.  Yes.  Forty to 100 years.  It takes that long to dismantle systems of oppression and really turn peoples’ souls around—IF we work at it hard. 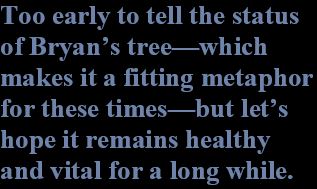 The pandemic, racism, my Linda’s fractured ankle and job loss—all were swirling round in my head when I climbed Bryan’s Mountain for the first time this year.  Naturally, so was the family foundation Rick and Desiree Guzman started as a living memorial to our family’s youngest son, Bryan Emmanuel Guzman.  It started with just one building named Bryan House, serving five refugee families.  When it grew to become Emmanuel House, it grew to serving 25 families. When it merged with the Joseph Corporation to become The Neighbor Project, we lost the names tying it to Bryan, but it jumped from serving 25 families to over 100, with 200 now clearly in sight.  That’s been nearly 14 years of hard work getting families into their own homes.  Though all its clients aren’t Black, many are people of color, and home ownership is one of the most efficient ways possible to close the racial wealth gap, a gap contributing immensely to the reason racism persists….

These thoughts stopped suddenly when I reached the top of my climb and turned right. About 40 yards ahead was Bryan’s tree, a small pine we put some of his ashes under a month after his death.  As I approached, I saw it was brimming with pine cones, more than I had ever seen on it.  Nothing lasts forever, and sometimes pines produce more cones when they’re under stress, perhaps even as a sign they’re dying.  But a “stress crop” preceding death is often accompanied by other signs:  yellowed or dried out needles, for example.  I didn’t see any of these.  In fact, the tree looked healthier than ever, and a bumper crop of cones on a healthy-looking tree could just as easily mean it had a great year.  Too early to tell—which makes the tree’s status a fitting metaphor for these times—but let’s hope it’s the latter.  Let’s hope I get to lead all the grand kids up to a vibrant tree.  With everything so topsy-turvy, hope is what we cling to.  And the memory of Bryan’s life, too, with or without the tree.

When Aaron came up there with Grace this year (he’d been there before), he took the most beautiful pictures of the tree ever.  They made the tree immortal in the way art can.  Here’s one of them:

♦  This post is part of a series called “Climbing Bryan’s Mountain.” Go to its Lead Post.  In 2016 Bryan’s living memorial, Emmanuel House, founded by Rick and Desiree Guzman, was named one of the “Top 100 Most Innovative” social change organizations in the world.