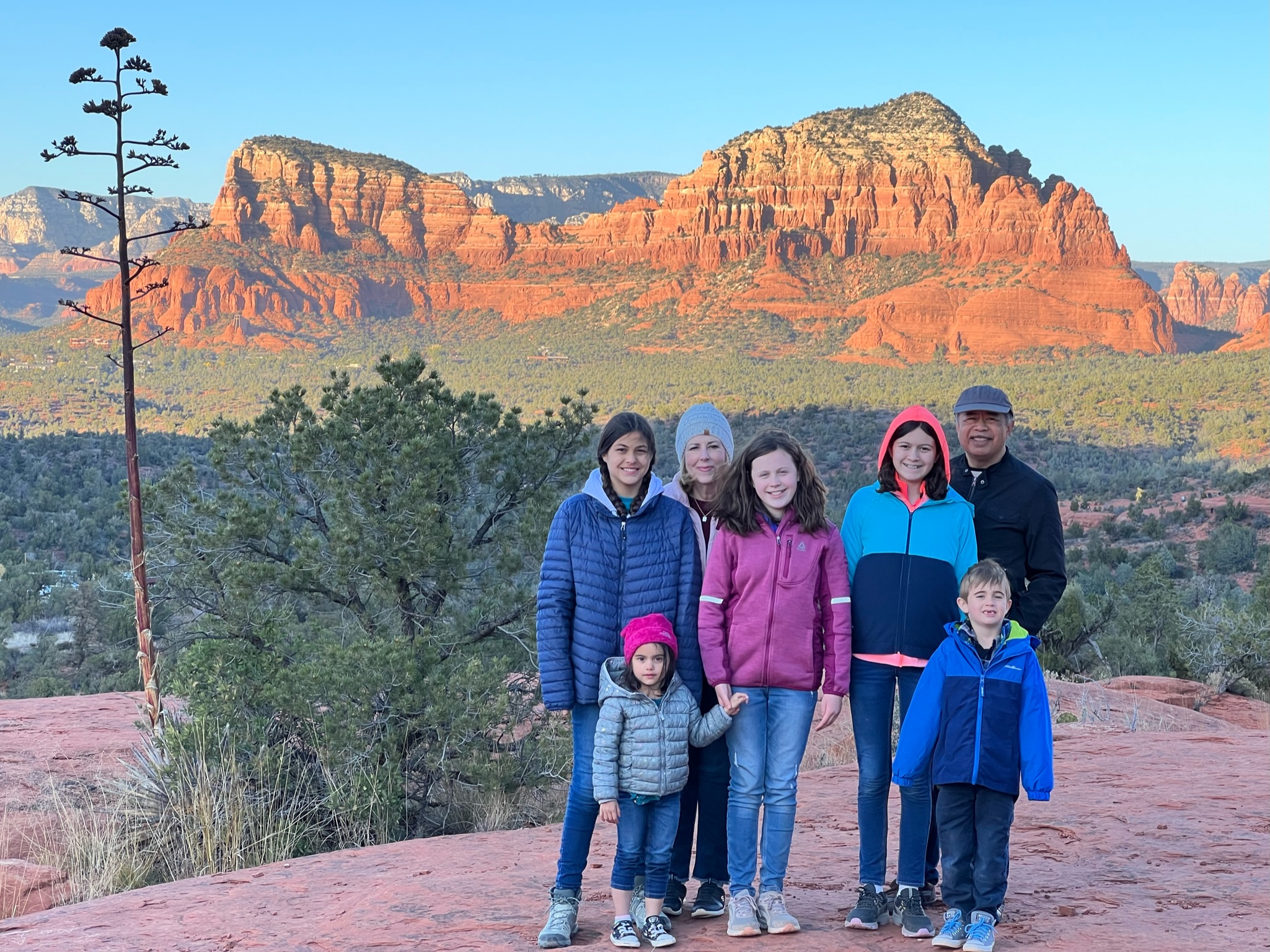 I hadn’t been up on Bryan’s Mountain (Bell Rock) since June 14, 2020, something I explained in my 2021 entry in this series called “Climbing Bryan’s Mountain.”  There had been our pandemic, then a year of extreme fire danger, but now on Thanksgiving Day 2022, over 2 years and 5 months later, I was back, this time with 12 others.  It was our Thanksgiving reunion in Sedona, AZ, with Rick’s family, Aaron’s, and Daniel’s. The picture above is of me and Linda with the five Guzman grandchildren: from left, Grace, Josie, Micah, with Adderly and Julian, the youngest ones, in front.  Because of being in a wheelchair, Kari had to stay a level below, but 12 of us made it up to Bryan’s Tree. The picture below shows (from left) Linda, me, Grace, Aaron, Micah, Rick, Josie, Desiree, Daniel, Julian, Tara, and Adderly—a string of names representing the most precious parts of my world. 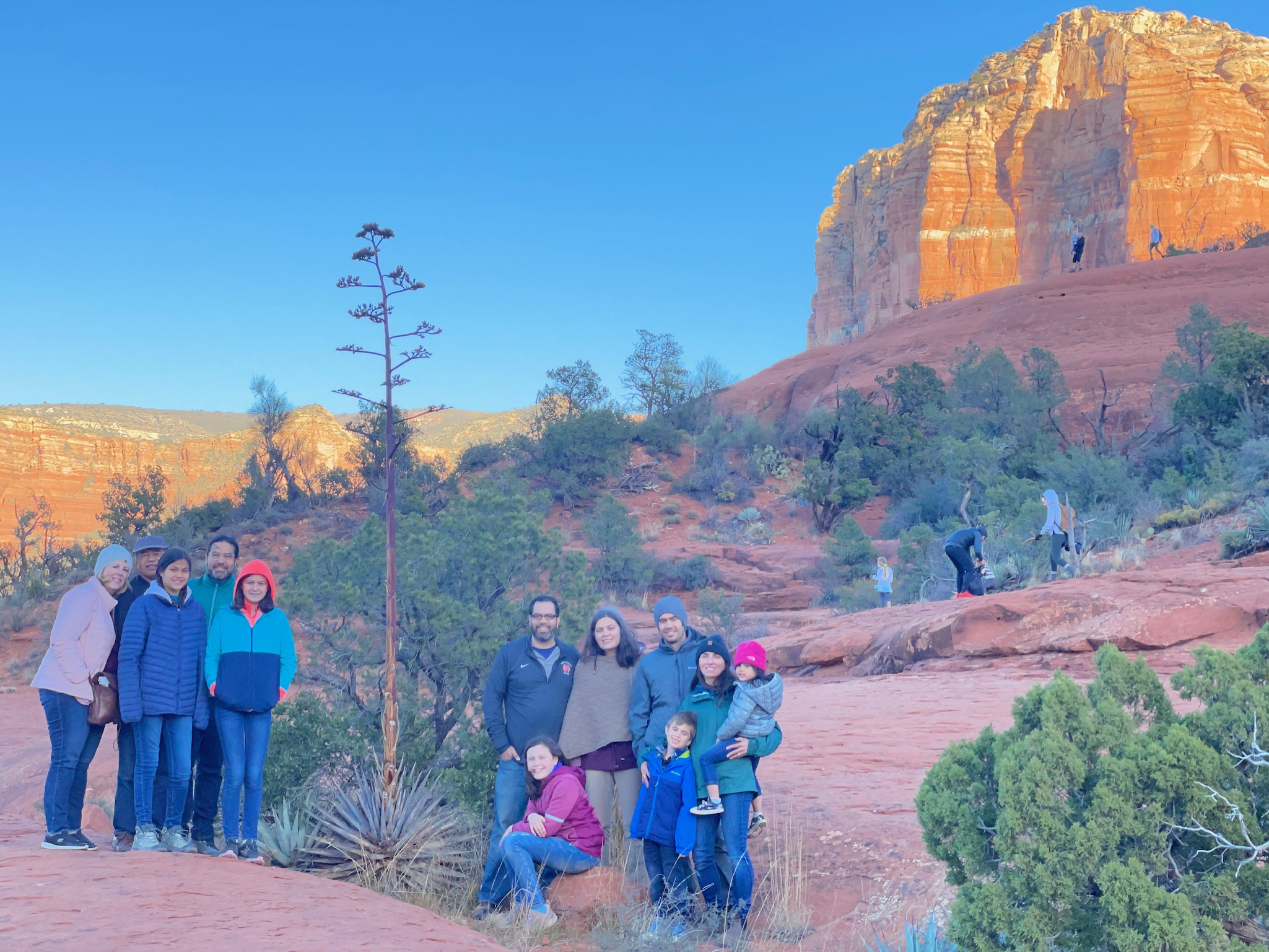 I wondered whether Bryan’s Tree would be alive at all, given the extreme drought of 2021 which took down hundreds of thousands of trees. But there it was, looking more bedraggled than I remembered, but still vital. This time, too, as the pictures show it held another surprise: the large yucca in front, which had always given it such a unique look, had sprouted, sending its century plant stalk way up in the air.  So the plant will eventually wither completely away, giving the whole complex of plants around Bryan’s Tree a wholly different look.  Change. Always change.  As it will be for each of us who showed up for this reunion.

We had a great time, even an “epic time,” a phrase I kept hearing during our week together.  “That’s an epic shot,” I’d hear of a picture, or an “epic scene,” I’d hear when the grandkids got to dancing or singing together.  Our time, though, was shadowed by sickness, as Grace, our 11-year-old granddaughter, had come to Sedona sick and couldn’t fully participate in many things. Then her Dad, Aaron, got sick, so much so that I canceled my flight back to Illinois, sent Linda back lugging our two big suitcases herself, and drove them the 400 miles back to their Riverside, CA, home.  I caught their germs too. As I write I’m still dragging, just coming out of coughing and blowing my nose all the time, which is way better than Aaron’s fate. He wound up in a Riverside ER twice, though the second time asked to be picked up to avoid the 6-hour wait.  When I left he was barely coherent.  Now his wife Kari is going through a version of their sicknesses.  Back here in Illinois, Josie, Rick and Desiree’s daughter, is a little under the weather, but not too bad, while Julian, Dan and Tara’s son, seems a little puny but also not too bad.  All in all, it was a fairly good escape from illness.

And the time was more than worth it. A few times in the entries I’ve posted in “Climbing Bryan’s Mountain,” I’ve spoken of wanting to climb the mountain up to his tree with all the grandkids. Liam and Maddy, on Linda’s side of the family, had already been, as had Grace, and now all seven have been there. None of the grandkids ever met their Uncle Bryan in the flesh, only in the memories their parents and grandparents share with them and each other so often.  “Would he have loved us?” Micah once asked.  Yes. It’s one of the biggest things they will have missed out on in their lives, the wonderful, embracing love of Bryan Emmanuel Guzman.  Some of them carry the imprint of his name in theirs—Micah Breanne, Grace Emmanuelle, Julian Bryan—and now they’ve all stood by his tree on his mountain and looked out at the incredible beauty from there. It’s a place and a scene which has sustained me over the years. May it be so for them and all of us who gathered there Thanksgiving Day, 2022.

♦ In 2007 Rick and Desiree started Bryan House (which became Emmanuel House, then The Neighbor Project) as a living memorial to Bryan. In 2016 Emmanuel House was named one of the “Top 100 Most Innovative” social change organizations in the world.