Caffeine speeds us up, Ambien slows us down.  Fast or slow, in America race is always there, much as we still spend huge amounts of energy denying it, trying not to face it.  Is Starbucks’ closing of 8000 stores “facing it”?  Yes, in a way, but Roseanne Barr’s follow-up tweet blaming Ambien for the racist tweet she aimed at “vj” shows how deep racism goes. Sanofi Aventis, the company that makes zolpidem tartrate (Ambien), quipped that its drug had several side effects, but racism wasn’t one of them.  There are formidable social, cultural, and economic structures in place to keep racism going strong for decades to come, but Barr’s “excuse” shows that all these together might not equal the strength of those implicit, Ambien-deep biases that might keep it going for much longer than that. 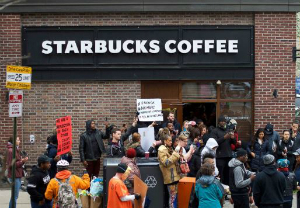 James Baldwin, who wrote about our racial dilemma as deeply as anyone ever has, spoke of a spiritual root to racism: a theology that equated black with evil, white with good, and supposed it was possible to clearly separate the two.  Reality is more complex than that, and inextricably mixed.  Even deeper, he said that racism ultimately came from denying, being unable to come to terms with, the “disquieting complexity” of our very selves.  We want simpler reality, simpler selves, clean and easily dealt with.  In an essay on Richard Wright’s Native Son, he comments on a speech given by the lawyer Max.  “It is addressed to those among us of good will,” Baldwin write, “and it seems to say that, though there are whites and blacks among us who hate each other, we will not; there are those who are betrayed by greed, by guilt, by blood lust, but not we; we will set our faces against them and join hands and walk together into that dazzling future where there will be no black and white.  This is the dream of all liberal men, a dream not at all dishonorable, but, nevertheless, a dream.  For, let us join hands on this mountain as we may, the battle is elsewhere.  It proceeds far from us in the heat and horror and pain of life itself where all men are betrayed by greed, guilt, and blood lust and where no one’s hands are clean.  Our good will, from which we yet expect such power to transform us, is thin, passionless, strident….”

Will we ever get deep enough?  Will attacking systemic racism finally end up changing our deep national and personal psyches, even our spirits, without too much real soul searching?  Starting there is better than nothing, but it may not be deep enough.  Implicit bias training—all these things driven by good will—might not be either.  It’s ironic that Starbucks, of all companies, should have been the site of one—there are so many!—of our more recent, prominent racial incidents.  This was the company that not too long ago launched an ill-fated “Race Together” initiative aimed at getting people to talk about race.  But it’s also a company whose very presence in a neighborhood often signals the gentrification of that neighborhood, a process that often pushes blacks, other minorities, and poorer people away.  In this complex light, one of Barr’s latest tweets notches up the irony (or white self-pity).  You’re tired of being smeared?  Oh, really.