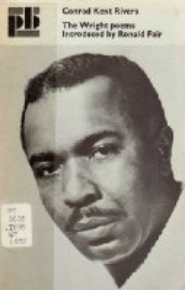 Conrad Kent Rivers’ success with poetry began in high school where his “Poor Peon” won the Savannah, Georgia, State Poetry Prize in 1951.  He went on to publish poems in such magazines as the Antioch Review, the Kenyon Review, Negro Digest, and many others.  His books of poetry include Perchance to Dream, Othello (1959), These Black Bodies and This Sunburnt Face (1962), and Dusk at Selma (1965).  After graduating from Chicago State, he taught in the Gary public schools until his sudden death in 1968, the same year the interesting Heritage series from London’s Paul Breman house published his powerful The Still Voice of Harlem, and posthumously his The Wright Poems (1972), introduced by Ronald L. Fair.

The poems I included in my book Black Writing from Chicago come from these two volumes.  For the 1962 anthology Sixes and Sevens he wrote:  “…I am not at peace with myself or my world.  I cannot divorce my thoughts from the absolute injustice of hate.  I cannot reckon with my color…And I shall continue to write about race—in spite of many warnings—until I discover myself, my future, my real race…I agree with Baldwin that ‘nobody knows my name.’ All the standards for which the western world has lived so long are in the process of breakdown and revision; and beauty, and joy, which was in the world before and has been buried so long, has got to come back.”

Perhaps his most famous poem is the ultra-short, and tragically still-ultra-pertinent “Watts:”

Must I shoot the
white man dead
to free the nigger
in his head?”

I publish this in the midst of the era running from Trayvon Martin through the Charleston church massacre, an era with many, many precedents and—though decent Americans wish it were not so—probably many, many more incidents like these in our future.  But who’s doing the shooting?  The clubbing?  The tazing?  I stopped at Charleston, but the hits just keep coming (Sandra Bland, etc. etc. etc.).

The Conrad Kent Rivers Prize has been a coveted award of the Chicago writing community, which he honored many times, including with those poems he wrote for Richard Wright and also for Hoyt W. Fuller.   In The Wright Poems he pursues the idea of Richard Wright returning from Paris to lead a black cultural revolution.  “A Mourning Letter from Paris (for Richard Wright)” begins, “All night I walked among your spirits, Richard: / the Paris you adored is most politely dead.”  It ends with a call home that’s also an admonition:

For me, my good dead friend of searing words
and thirsty truth, the road to Paris leads back home:
one gets to miss the stir of Harlem’s honeyed voice,
or one forgets the joy to which we were born.

His poem “In defense of black poets (for Hoyt)” memorializes Hoyt W. Fuller’s scathing critique of the do-little black middle class. “A black poet must remember the horrors,” he says, but:

It shall come to pass that the fury
of a token revolution will fade
into the bank accounts of countless blacks
and freedom-loving whites.

only the forgotten wails of a few black
poets and artists
shall survive the then of then,
the now of now.

♦  Go to the Black Writing from Chicago: In the World, Not of It? page.