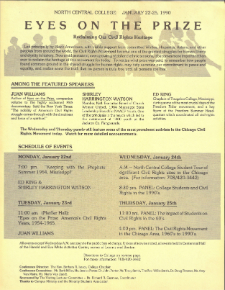 This is the LEAD POST in a series on major conferences and individual speakers I helped bring to my college as the head of, first, The Visiting Lecturer Committee, which then grew to become the Cultural Events Committee.  I’m posting these now partly as inspiration and starter ideas for CODE —The Coalition on Diversity in Education, a new social change group I have helped lead— as it contemplates a major conference during the 2016-17 college year.

The tagline for this website is “Arts, Diversity, Social Change…Faith,” and as I look back many years, decades before I began this site, it’s amazing to see how this tagline captures what has so long directed my energies.  Most of the major conferences were, indeed, about the arts, about diversity, about social change, and also deeply about faith. The picture to the left is of the brochure for one of the conferences I remember most: “Eyes on the Prize—Reclaiming Our Civil Rights Heritage.” See the LIST BELOW for a post on each conference, or an important, memorable person I also helped bring. “Eyes on the Prize” is #1 on the list.

When I took over the Visiting Lecturer Committee in the mid-80’s I began to grow the program from a $4000 budget to a $30,000 one by the mid-90’s, and from one major event a term to the many we now have.  Some of this growth came from recognizing that while we perhaps had only one major “lecture” a term, there were other “events,” ones in the arts especially, which we should draw together and list in one place.  Thus, Visiting Lecturer became Cultural Events.

EYES ON THE PRIZE: Reclaiming Our Civil Rights Heritage.  Featuring Juan Williams, author of the companion volume to the great PBS series Eyes on the Prize, plus Shirley Harrington Watson and Rev. Ed King, two persons deeply involved in the momentous Freedom Summers which began in 1964.

CHRISTIANITY AND THE HOLOCAUST:  The role of the Christian Church was so often a shameful one—as it was during the Civil Rights Movement—but there were also “Righteous Christians” who aided Jews during this darkest of times.

IMAGE & THE FEMININE SELF: Featuring Carol Gilligan, author of the groundbreaking In Another Voice, and Stephanie Coontz, who also authored several groundbreaking books focused on women and on family, including The Way We Never Were.

SOUTH AFRICA:  Featuring Colin Jones, dean of the Capetown Cathedral and one of Bishop Desmond Tutu’s closest allies, and Aubrey Dwyer, counselor of the permanent mission of South Africa to the U.N.

THINKING GLOBALLY, ACTING LOCALLY: A conference in support of the goals of Earth Day, 1991.

RACE, CLASS, AND URBAN DEVELOPMENT:  Featuring the eminent urban scholar Joe Feagin and leading urban thinkers and planners for the city of Chicago.

FROM COMMUNISM TO CAPITALISM?  About Eastern Europe in Transition.

TRUTH & CONSEQUENCES:  Talks and discussions on math and cultural change, and the crisis in American math-science literacy.