David Lionel Smith, who writes poetry as D.L. Crockett-Smith, is John W. Chandler Professor of English at Williams College, where he has also served as Dean of Faculty and as Chair of African-American Studies.  He has also taught at The University of North Carolina at Chapel Hill, Duke, and New College of Florida and served as a consultant to such organizations as the Smithsonian Institution, the Folger Shakespeare Library, the Southern Humanities Media Fund, the Massachusetts Foundation for the Humanities, and The Mark Twain House in Hartford.  He has published many essays on such subjects as Mark Twain, Southern Literature, Nature Writing, and the Black Arts Movement and translates the works of Spanish and Latin American poets, specializing in Federico Garcia-Lorca and Pablo Neruda.  In 2008-2009 he translated five volumes of poems by García-Lorca.  Among his other books are the five-volume Encyclopedia of African-American Culture and History he edited with Jack Salzman and Cornel West, and his poetry collections Civil Rites and Cowboy Amok, the latter built on his uses of imagery from the mythic American West, which also stands for the entire Western World.

In my book Black Writing from Chicago, I included a precursor to Cowboy Amok, his poem “Cowboy Eating His Children.”  Here he begins with a reference to Goya’s “Saturn Devouring His Son,” a painting of a “mad god with blood / on his lips and raw flesh /
stuck beneath his fingernails.”  This Saturn symbolizes the fanatic West chanting lines eerily similar to what we hear today: “this bomb is a PEACE bomb,” “these dead children were TERRORISTS.” He sings a war song pitting “East against West, North against South,” but as he croons “we see the pieces of your children / dangling from your mouth.”  This poem first appeared in Open Places and again in NOMMO: A Literary Legacy of Black Chicago (1967-1987), the wonderful 20th anniversary anthology of the Organization of Black American Culture (OBAC).  Smith was active in Chicago’s OBAC Workshops from 1976 to 1980, the year he received his Ph.D. in English from the University of Chicago. 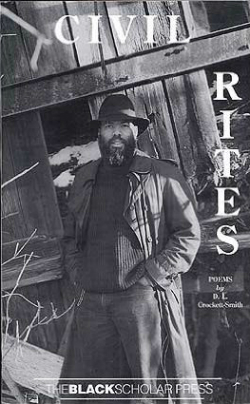 His thoughts on the nature of race are particularly compelling, especially in his essay “What Is Black Culture?” from Wahneema Lubiano’s important 1997 book The House That Race Built, featuring essays by Smith and others, including Toni Morrison, Cornell West, and Angela Y. Davis.  Smith’s goal is “to theorize how we might endeavor within a culture bound by race to subvert the subordinating strictures race was designed to perpetuate,” and he begins by probing America’s connection of black culture with anger and violence, a connection in which the Black Arts Movement itself was ironically complicit.  He quotes a line, for example, from Amiri Baraka’s play The Dutchman and the Slave, where a leading character says, “…if Bessie Smith could have killed some white person, she wouldn’t have needed that music.  She could have talked very straight and plain about the world.”  Smith dismantles this connection by probing the nature of “culture” itself.  For him culture is such a fluid, inextricably mixed hybrid of many “cultures.”  This means, for example, that “black violence” is inevitably related to, and springs from, violence in other “cultures.”  He quotes Cornell West, who says “…the behavior so commonly described as ‘black pathology’ is rather the tragic response of a people bereft of resources in confronting the workings of U.S. capitalist society…a jungle ruled by cutthroat market morality.”  Elsewhere, regarding culture, he asks, “…is black culture obligatory for black people, and does blackness preclude them from mastering non-black cultural modes?”  If country star Travis Tritt sings soul, is that “black culture”?  Is it not “just” black culture because John Coltrane plays a saxophone, an instrument invented by a French man?  “Black Culture,” like all “culture,” he concludes is “…a complex set of processes and interactions.”  Most important, he says that although, “Race is a commonsense notion.  It falls apart under rational scrutiny.”  Race is, finally, a cultural construct, “…a set of social prescriptions invented by slaveholders and their descendants to exploit and constrain persons classified as black.”

“What Is Black Culture?” begins with a quote from Ralph Ellison: “Could this compulsion to put down invisibility in black and white be thus an urge to make music of invisibility?”  From the crooning of war songs, to Bessie Smith’s blues, to a country star singing soul.  What is it that’s “invisible”?  That violence, for one, is not the possession of just one “culture.”  To think so is one of the ways we perpetuate and justify racism, one of the ways we continue to think “race” is just commonsense.

♦  Go to a list of Black Writers and to Black Writing from Chicago.
♦  Go to the Teaching Diversity main page.