Discovering the Power of the Poor: A TEDx Talk by Rick Guzman

The following is a slightly rearranged version of a recent story on the North Central College website.  Go HERE to see the TEDx talk by Rick Guzman it reports on.  TED is a nonprofit devoted to spreading ideas, usually in the form of short, powerful talks. TED began in 1984 as a conference where Technology, Entertainment and Design converged, and today covers topics ranging from science to business to global issues. Independently run TEDx events help share ideas in communities around the world. 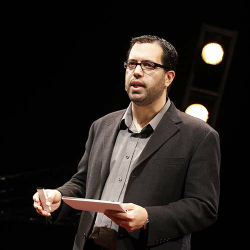 Guzman was one of 12 presenters at the inaugural TEDxNorthCentralCollege event Feb. 13. The theme of the TEDx was “Changing the World for Good” and his talk was titled “Discovering the Power of the Poor.”

Guzman is an assistant chief of staff for Aurora Mayor Tom Weisner. He serves as the city’s primary liaison to Aurora’s nonprofit and faith-based organizations and oversees policy areas such as housing, human rights and cultural activities. Guzman and his wife Desiree in 2002 co-founded Aurora’s Emmanuel House, which helps lower-income families break the cycle of working-class poverty through a pathway to homeownership.

Through his work at Emmanuel House Guzman said he has come to understand how difficult it is for hard-working, low-income parents to acquire enough savings to buy homes. Their entire monthly incomes are spent on essentials, with the biggest expense being rent.

“Unfortunately we know from long-term social research that this cycle is not only hard for most working families to overcome but it’s a generational cycle that is statistically certain to repeat itself in the overwhelming number of poor families,” Guzman said.

Entire nations can turn their economies around, raise standards of living and narrow income gaps, he said. In 2000, for example, the U.S. economy was three times that of the Chinese economy. But over the past 15 years the number of people in China living under the World Bank’s measure of extreme poverty of $1.25 a day shrunk from 450 million people to just 84 million, and China has overtaken the United States to become the world’s largest economy.

“Fifty-one years ago President Lyndon Johnson declared an unconditional war on poverty,” Guzman said. “In the area of senior citizens we’ve seen some dramatic drops in the poverty level. But for nearly every other population the attempted solutions to poverty reduction haven’t moved the dial. And poverty rates for many groups have actually risen, negating all the gains in poverty reduction for seniors.”

In Illinois, for example, the overall poverty rate was 14.7 percent in 1960 and it’s 14.2 percent today, he said. Meanwhile, today the 400 richest Americans now have more wealth than all 41 million African-Americans combined, Guzman said.

“These problems have persisted or grown because we’ve primarily been presented with poverty-alleviation strategies that say the answer is either in getting the poor to take on greater personal responsibility or in providing more and more aid and assistance to the poor,” he said.

In Aurora, a network of nonprofits is working to create homeownership opportunities.

“For working-class renting families their largest expense year after year is rent,” he said. “That results in $10,000 to $12,000 every year with nothing to show for it.”

About 20 percent of Aurora’s 200,000 people are lower income residents collectively paying an estimated $125 million in rent each year, he said.

“So what Emmanuel House did was create a temporary disruption to the outflow of incomes for some lower-income families,” Guzman said. “We got some apartments that we’re running more efficiently with the help of a network of churches and dedicated volunteers.”

The effort has grown from five apartments to nearly 20 apartments in the past few years, he said. The money paid by families for monthly rent is diverted into savings accounts they own to be used for future down payments for homes.

Businesses are more likely to locate in a community with higher rates of homeownership, which leads to a stronger tax base, lowering the tax burden on working families, creating more funding, better schools, and other benefits, Guzman said.

“Let’s not repeat the same mistakes of the past 51 years of policies that have moved our poverty rate exactly nowhere. Let’s try this different, more inclusive strategy in all of our development endeavors.”

♦  Go to the EMMANUEL HOUSE main page on this site.