Does It Matter If I’m a Racist?

This is the LEAD POST in a series based on the workshop BECOMING THE BELOVED COMMUNITY: TALKING ABOUT RACE IN AMERICA.  It was developed by a committee of United Methodist lay and clergy persons from the Northern Illinois Conference.  See below for committee members and a list of articles in this series, the first being a preview of the workshop itself.

Does it matter if I’m a racist?  Not as much as you’d think. 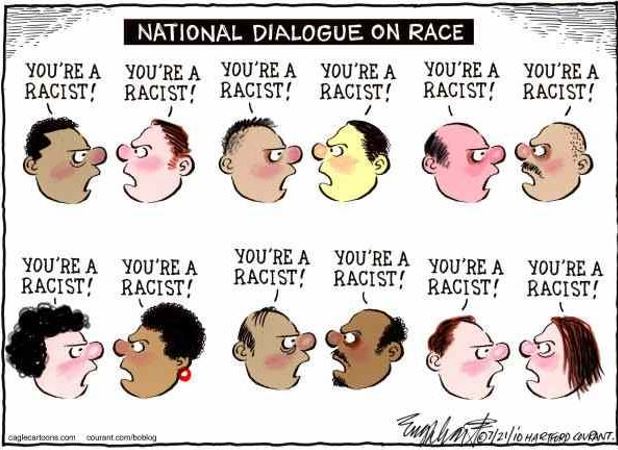 The VIDEO below is one we use in the anti-racism workshop Becoming the Beloved Community, and it explains how focusing too much on individual cases of racism distorts the whole picture of what racism is.  It’s individual and personal—yes, and that’s important—but it’s perhaps more important to become “Systemically Aware.”  One racist doesn’t keep racism going, nor does a thousand individual racists, or 10,000, or even a million.  Just as one landlord—or 10,000—who is racist and discriminates against a person of color doesn’t keep housing discrimination going and going.  It’s systems that mold our personal perceptions and actions, and, behind housing discrimination, it’s the banking system, the real estate system, the appraisal system that matter more.  Yet our supposed “dialog” on race looks much more like the toon above.  We’re obsessed with pointing fingers, finding individual villains, searching for persons rather than confronting systems.  It’s just easier to stay personal, so we take the easy way out, but eventually that won’t help us turn the corner on racism.

Not that the individual and personal isn’t important.  A person who’s racist, consciously or not, harms others tremendously.  More often than not, they cause pain, or trauma, or even tragedy.  And they hurt themselves, too.  And their children, to whom they pass along their racist beliefs and ways of acting—as if there weren’t already enough for children to overcome.  For a person, like a racist, who harms and hurts anyone else, who shuts anyone out and sees them as less than human, is also hindering their own ability to become fully human themselves.  It’s that old adage of reaping what you sow.  This situation is further complicated because persons who cause such harm—in order to protect themselves against the deep-down knowledge that their actions are wrong—must also lie to themselves, must develop rationalizations so evasive and bizarre that they often approach the pathological, or actually become so.  Still, these personal lies may, finally, not be as important as the systems behind these lies, systems that not only falsely divide people, but also rob those that are discriminated against from their fair shot in our society.

So the Becoming the Beloved Community workshop stresses balancing the personal and the systemic, and because the balance is so skewed towards the personal it spends more time hammering home the importance of becoming systemically aware.  The workshop title doesn’t mention race at all, and perhaps that’s bending too far.  We just don’t want people taking the easy way out—which, again, is simply calling each other racist.  At the workshop calling someone a racist is out.  This attitude, we hope, opens the door to real dialogue where everyone can not take it so personally but instead take a deep dive into systems.  We’re shaped by them, but we can gain some freedom from them, too, and in the process become more free from racism and other -isms and phobias that keep us apart.

ARTICLES IN THIS SERIES:
Note: Several of these articles were written long before the Becoming the Beloved Community workshop was created. They are among the things I myself brought to the table and are ideas I have worked on for many years. The committee I led consisted of Tom Butler, Amania Drane, Rev. Matthew Krings, Lennox Iton, Donna Sagami, and Buzz Wheeler. Rev. Krings was subsequently asked to take leadership of another committee and was replaced by Rev. Tenille Power. A better group of people I could not have imagined.

♦  Go to the Diversity Training and Teaching main page for more on race and diversity, and to “Unpacking Racism: Noble Sentiments…,” the Lead Post in another series on race based on a 2020 UMC Lay Convocation I spoke at.  Go HERE  for workshops, trainings, and projects—including ones on race—I’ve led for churches, corporations, and other organizations.