Guzman for Aurora has announced that Dick Durbin, senior Senator from Illinois, and Bill Foster, Congressman of the 11th District, which includes Aurora, have endorsed Rick Guzman for Aurora mayor.  In addition, Labor has also thrown its support behind Guzman’s candidacy, as has the Daily Herald, Illinois’ third largest newspaper. The full text of the Herald‘s endorsement follows below.

The Daily Herald had previously endorsed Guzman in the primary, and now the newspaper’s Editorial Board has said this in its endorsement of Guzman to be the next mayor of Aurora:

“After a February primary in which they winnowed four ballot candidates along with five declared write-ins down to two general election candidates, Aurora voters now must decide between longtime Alderman-at-Large Richard Irvin and City Hall staffer Richard ‘Rick’ Guzman for mayor.

“It’s a compelling choice, as both bring experience and a passion for the city and the job. Irvin, 46, has served on the City Council for 10 years and is making his third attempt for mayor. Guzman, 39, has worked for the last five years in the mayor’s office as assistant chief of staff. He is making his first attempt at political office.

“Irvin, an attorney, uses a slogan, C + E = P, to explain his vision and what he will focus on: reducing crime, improving education and economic development, all leading to prosperity. It’s a good sound bite for the hard-charging alderman. 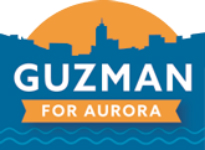 “But we are more impressed with Guzman’s thoughtful approach to the job. Rather than claiming he has all the answers, Guzman recognizes that the job of mayor is to build coalitions as he works to improve the city. He has made that the central theme of his campaign.

“While Irvin says he’s the one who understands best how to deal with crime in the city, Guzman, meanwhile, won the endorsement of two former city police chiefs. Guzman also has been on the front lines in bringing development to town in his role in the mayor’s office.

“Irvin says he would develop an economic development plan for each ward in the city and expects each alderman to fulfill those plans. Guzman, meanwhile, wants to focus on commercial corridors, regardless of ward, as a more strategic way of bringing in more economic development.

“While it’s clear both candidates are committed public servants, we like Guzman’s approach to governing best and endorse him as the next mayor of Aurora.”

♦  Go to the Lead Post for articles about Rick Guzman’s campaign on this site, and to the Guzman for Aurora website.