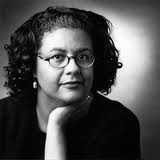 As the 2012 election nears—yet another historic one, most say—I think about Elizabeth Alexander, the poet who read her poem “Praise Song for the Day” on January 20, 2009, at the Inaugural of President Barack Obama. The perils of writing “public poems” are well known, and most said she fared well, if not spectacularly so. But in many ways it didn’t sound like her at all. Its lines lacked the usual tightness of her lines, and missing was her deep sense of gender, her intense, lyrical eroticism—something that probably would have been hard to place appropriately in a poem for an occassion like this.

Born in New York City in 1962 and raised in Washington, D.C., Alexander currently teaches at Yale, but she also taught at the University of Chicago, winning the Quantrell Prize for excellence in undergraduate teaching. This, as well as her relationship to Chicago’s Tia Chucha Press, plus her wonderful poem “Blues” made it easy for me to tag her enough of a Chicago poet to include her in my book Black Writing from Chicago. This is how “Blues” begins:

You can tell right away this is about a thousand miles away from “Praise Song for the Day.”

Besides poetry, Alexander has published fiction, critical essays and reviews in the Paris Review, the American Poetry Review, the Washington Post, the Village Voice, and other important periodicals, and collected her poetry in The Venus Hottentot (1990), Antebellum Dream Book (2001), and Body of Life, published in Chicago by Tia Chucha Press. A collection of essays, The Black Interior, along with a fourth book of poems came out in Fall 2003. She has won NEA and Guggenheim fellowships, among many other awards.

For me the poem that most represents those qualities I mentioned above—the intense lyricism and eroticism coupled with a deep sense of history and race/gender consciousness—is the three-part “The Josephine Baker Museum,” Josephine Baker embodying the intersection of eroticism, race, history, and feminism as boldly and ironically as anyone ever has. Here are a few lines from “The Wig Room,” Part Three of the larger poem.

A gleaming black sputnik of hair…

Black crowns to be taken on and off, that live
in the room when the lights go out, a roomful
of whispering Josephines, a roomful
of wigs in the dark.

This part echoes Paul Laurence Dunbar’s “We Wear the Mask.” Masks, wigs, more masks, some grinning and lying—you often have to do all these to fool, even mock, those that threaten your humanity, sometimes your very survival. It’s not dishonesty in the normal sense, but a tactic only those who have faced overwhelming racial—and gender—odds will ever understand fully.

√ Go to a list of Black Writers written about on this site, OR to the Teaching Diversity main page.  Go here for a list of poems and poetry commentary on this site.

One Response to Elizabeth Alexander: Praise Song for the Obama Inaugural