Embracing and Fearing the Void: The Root of Racism

James Baldwin once called America a nation “dedicated to the death of the paradox,” a people particularly fond of the straight-forward answer: the Yes-No, the Black-White, the Just-The-Facts, Ma’am, reply.  Which could make reading Baldwin particularly difficult.  As Raoul Peck, director of I Am Not Your Negro—the academy-award-nominated film about Baldwin—recently said: his sentences “hit you on one side, and once you think you understood the sentence, then he would hit you with the second part of the sentence.”  As in this passage, one of the most important in Baldwin’s entire work.

“We take our shape, it is true, within and against the cage of reality bequeathed us at our birth; and yet it is precisely through our dependence on this reality that we are most endlessly betrayed.  Society is held together by our need; we bind it together with legend, myth, coercion, fearing that without it we will be hurled into that void, within which, like the earth before the Word was spoken, the foundations of society are hidden.  From this void—ourselves—it is the function of society to protect us; but it is only this void, our unknown selves, demanding, forever, a new act of creation, which can save us—“from the evil that is in the world.”  With the same motion, at the same time, it is this toward which we endless struggle and from which, endlessly, we struggle to escape.” 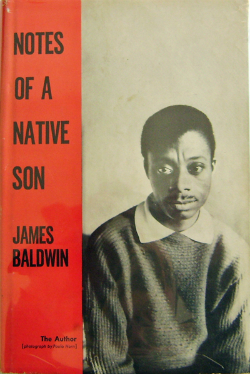 This comes from an essay about Harriet Beecher Stowe, “Everybody’s Protest Novel,” the lead essay—after a short, important autobiographical introduction—of Baldwin’s 1955 collection Notes of a Native Son. It twists and turns, beginning with the paradox of being shaped and betrayed by the same reality, and ending with us struggling towards “this void” and struggling to escape it “With the same motion, at the same time….”  It cannot be said enough: this is typical of Baldwin, partly because he was so dedicated to capturing—and honoring—the complexity of the human situation.  In this passage he also leads us straight to the paradox of racism with a phrase that might go by us quickly.  “From this void—ourselves—,” “void” and “ourselves” standing next to each other, the dashes acting as an equals sign: void = ourselves.  A few words latter the equivalence snaps into sharper focus as “this void” becomes “our unknown selves.”  We fear this void—our unknown selves—because it is unknown, yet we sense that this unknown self is the fount of our own creativity, which causes us to create in order to name this void—make it known—yet, paradoxically, if it were known we sense our creativity would dry up.

This void has a color…black.  It is the void out of which God speaks, saying “Let there be light.”  Yet the light lasts only a day time, before night time returns. This void—blackness, darkness—is also associated with our sins, which we try to escape by wiping them clean or denying them so that we may be eternal children of light. As a nation we have denied, even tried to wipe out, black people to deny or wipe clean what many have called our country’s “original sin:” slavery and the racism that must attend slavery.

In “Many Thousands Gone,” the essay on Richard Wright that follows “Everybody’s Protest Novel,” Baldwin says what he will say in many ways throughout his career: “Our dehumanization of the Negro then is indivisible from our dehumanization of ourselves: the loss of our own identity is the price we pay for our annulment of his.”  The
root of racism, and of any other way we dehumanize others, is our inability to accept that we are both black and white, yes and no.  We think purity is big, that it leads to Truth, but it actually diminishes and simplifies what we are and causes us to diminish and simplify any human being who reminds us of our complexity and impurity.

♦ This article is part of a series on James Baldwin.  Go to the series’ Lead Post.

♦ Go to a list of Black Writers on this site, and the Teaching Diversity main page.

This entry was posted in Black Writers, Social Change and tagged I Am Not Your Negro, James Baldwin, Notes of a Native Son, racism, Raoul Peck. Bookmark the permalink.