Nearly without fail, the excerpt from Era Bell Thompson’s American Daughter, which I included in my book Black Writing from Chicago, is my students’ favorite. 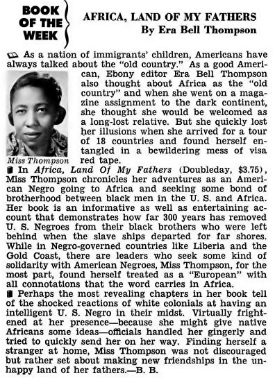 Leaving her native North Dakota in 1931, Era Bell Thompson came to settle in Chicago in 1933.  In 1945 she received a Fellowship in Midwestern Studies from the Newberry Library to write her classic autobiography American Daughter.  She titled it in reaction to Richard Wright’s Native Son, a national sensation in 1945, intending to provide an view opposing Wright’s bleak image of American life.  “Usually an autobiography is written near the end of a long and distinguished career,” she said, “but not taking any chances, I wrote mine first.”  American Daughter was published with great success the following year, and soon afterwards John H. Johnson—also a leader in extolling a more middle class, non-Richard-Wright view of America—hired her to work at his publishing firm.  By 1951 she was co-managing editor of Ebony, a job she held until 1964 when she became the magazine’s international editor, a post which nourished her ever-present need to wander and resulted in her 1954 book Africa: Land of My Fathers.  In 1963 she edited the interesting White on Black: Views of 22 White Americans on the Negro.  The University of North Dakota bestowed an honorary doctorate on her in 1969, and in 1976 she received the state’s highest award, the Teddy Roosevelt Rough Rider Award. 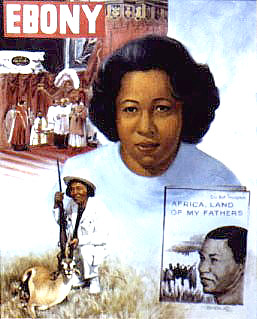 The excerpt I included in Black Writing from Chicago comes from near the end of American Daughter and begins with a near-mythic meeting between Thompson, representing another era of Black aspiration, and Robert S. Abbott, a now old and—at least as Thompson sees him—“bitter” symbol of the old guard for whom race was an ever-present obstacle.  Though obviously greatly plagued by race herself, Thompson is more willing to take to heart the words of the elderly guide she meets on her first visit to the Chicago Board of Trade.  Beaming when she tells him she is going to school and holding up to her the example of someone who has “made it,” he says: “No matter what you do, do it well, be the best there is, and remember, here in America all things are possible, everyone has the opportunity to become great.”  I end my excerpt with Thompson saying, “The chasm is growing narrower.  When it closes, my feet will rest on a united America.”

This is why the vast majority of my students love this excerpt so much.  It affirms one of America’s founding myths: meritocracy.  Notwithstanding the evident falseness of the myth—“everyone” doesn’t have the talent, and won’t have the luck or money or patronage it takes to become great—it is still not an entirely ignoble thing to believe it.  For one thing, “great” could be a relative term meaning not stardom but “just” a better life than your parents had, and the elderly Board or Trade guide doesn’t guarantee greatness, just the opportunity.  The equality of that opportunity, though, has come under greater and greater scrutiny and suspicion.  Is America still the land of opportunity?  In an age where we have the greatest disparity in wealth distribution in American history—I report on this in my “Graphic Inequality”—and progress on alleviating racism seems excruciatingly slow to non-existent, a consensus against the guide’s optimism seems to be forming.  It matters, of course, if you’re liberal or conservative.  If liberal, you see upward mobility in the U.S., for example, lagging behind much of Europe and other parts of the world. But Scott Winship of the conservative Manhattan Institute for Policy Research, for example, writes, “My research finds that roughly 40 percent of today’s 40-year-olds who grew up in the bottom fifth of income remain in the bottom fifth. But over 80 percent are better off in absolute terms than their parents, after adjusting for the rising cost of living and declining household size.”  It’s the old relative vs. absolute argument.

The subtitle of Black Writing from Chicago is In the World, Not of It?  In my Introduction I write about how blacks have argued for decades about the extent to which they should fully want to be part of U.S. culture—that is, in part, the extent to which they should buy in to this myth of glowing opportunity.  As I say in my introduction to the book, it often comes down to how one views, and buys into, American middleclassness.  Era Bell Thompson buys in.  So does Leonidas Berry, and Dempsey J. Travis, and even Leanita McClain, though all these less so than Thompson.  Sometimes much less so, especially McClain.   I included two of McClain’s essays, “The Middle-class Black’s Burden” and “How Chicago Taught Me To Hate Whites.”  The first reaffirms opportunity, something McClain seized, rising high in the Chicago Tribune hierarchy.  However, just the title alone of the second essay tells you that, in the end, McClain finds opportunity—especially Black middleclassness—tainted, even foreclosed, by racism.

♦ Go to a list of Black Writers on this site, and to the Black Writing from Chicago page to learn more and buy the book.

♦  The issue of Black middleclassness is one of the central issues in the excerpt I included from Barack Obama.