Posted on February 6, 2013 by Richard Guzman 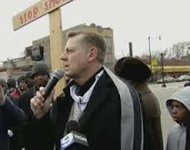 Saturday, January 26, 2013, North Central College:  the 25th Anniversary concert of the Gospel Extravaganza, an event I helped start that many years ago.  My cell phone went in and out of my pocket all evening, partly because my wife Linda kept nudging me all-concert long: “Hey, why aren’t you filming this?” “Hey, you’re not getting this?  What’s wrong with you!?”  But I was too caught up in the moment.  Anyway, in the end the phone managed to capture only about 25% of how the music sounded (if you plug in to speakers or use headphones), but only  5% of the electric spirit in the room no matter what you plug into.  Like trying to capture the Grand Canyon in a single, point-and-shot photo—but, still, it’s something.  Go HERE to see my 4.5-minute version of the 2.5-hour concert.

“You were the only faculty who gave us support, who believed in us,” said Harold McCadd to me this year.  He was one of the leaders of a group of students who, a little more than 25 years ago, had actually put a gospel concert together at the Community United Methodist Church down the street.  I was in the middle of building the college’s Cultural Events program at the time, and when I went to see it at the church and felt the energy of their praise, I told the students it would be a college event and in Pfeiffer Hall from now on.

It’s always drawn hundreds of people, and I think in its earliest days we must have topped a thousand  a few times—which makes it one of the largest events that still remains essentially on the margins of the college’s consciousness.  (How serious are we about “diversity,” really?)  At least Pfeiffer Hall always seemed jammed, seemed standing-room-only.  At the second or third Extravaganza everyone was clapping, dancing, shouting, jumping so hard, I swear  I saw the Pfeiffer balcony move.  “Oh, no, oh, no,” I thought, but everything held together—kind of.

“Oh, no,” you’d hear regularly at every concert. “Oh, no.  Somebody’s getting blessed.”  And someone in the choir or in the audience—sometimes many ones—overcome by emotion, caught up in the atomic energy of praise, would start trembling, would even pass out: “slain in the spirit,” some call it.  At the third Extravaganza one of my abiding memories is when two white men, both with short-cropped hair and skinny ties, came with erratic, trembling steps down the right center aisle and fainted at the foot of the stage, where Tracy Smith—now Dr. Tracy Smith-Malone, a district superintendent in the United Methodist Church—looking slightly annoyed, fanned them with a program until they came to.

Father Mike Pfleger, famous for his activism and pastoring at St. Sabina’s in Chicago, was one of our earlier supporters.  At the second or third Extravaganza he was supposed to do the opening prayer, but had been arrested earlier that afternoon for defacing billboards in his neighborhood, billboards that targeted the black population with higher-tar cigarettes, higher-alcohol-content beers.  It was a half hour past starting time, and I was going to go out and do the opening prayer myself when the alley doors to Pfeiffer flew open and in he walked.  “How’d you get out?” I asked.  Everyone knew he was guilty.  He just smiled and, looking around back stage,  said, “Where’s the organ player? Can’t pray without an organ player.”  I rushed upstairs shouting, “Someone get down here to play for Father Mike, or I’ll do it!”  After some loud rustling, Eldred—so large, and such a great musician—was in place.  As I went out to introduce Father Mike, he grabbed me by the shoulder.  “Remember,” he whispered, “put the mic down on the floor in the center of the stage.”

I gave short welcomes, gave Father Mike a short intro, then, “Here to lead us in prayer!  Father Mike Pfleger!”  Mike Pfleger is an Irish Catholic, blonde hair, bright green eyes.  But it could have been James Brown who rushed past me, slid on one knee, and swooping up the mic and jumping two feet off the ground in one motion, landed, shouting, “The Apostle Paul taught us how to understand our salvation!  But!  David!  David!  David taught us how to P-r-a-a-a-a-i-s-e!”  “To Praise! To Praise!” he shouted over and over, the crowd instantly at a fever pitch, on its feet, shouting, “To Praise, To Praise!” back at him, antiphonally, everything on the brink of bedlam.  This before the first musical act had even made it to the back wings.

The McCadd’s and me: three of those who started the Extravaganza 25 years ago.

“When we pray we ask God this, tell God that, but it’s praise that moves the world.”  That’s what I said at the beginning of the 25th Anniversary concert.  I was slightly less animated than Father Mike—LOL—but could have meant it almost as much.  “Tonight,” said Rev.  Chris Druce Jones, our host for the evening, “this is a Tabernacle of Praise,” a sentiment echoed over and over for, now, 25 years.  There’s no denying it’s quite a show.  But everyone has been super anxious over the years to say that it’s much more than a show.  It’s church—church in the broadest sense—whether you’re a believer or not.

For the first Extravaganza the students brought me a proposed poster that had “JESUS IS THE ONE!” arching across the top half, and “Gospel Extravaganza” in smaller, straight print below.  I suggested we reverse it.  “Dr. Guzman,” someone said, “are you putting our Lord in second place?”  No. No.  I explained that Gospel Extravaganza was a broader term, suggesting that everyone, believer or not, Christian or not, was welcomed in.  “Jesus is the Lord of all, even if people don’t know that,” I said.  It seemed to satisfy them, though I got plenty of second, sideways looks for weeks.   I still get them.

Thanks to the many, many people—especially the students—who have kept the Gospel Extravaganza going and vital for 25 years, for I myself have not been actively involved for a while.  Lynn Pries, college chaplain, has been the event’s chief advisor the last few years. It usually happens the last Saturday of January, and we’re already looking forward to next year, the 26th iteration.

The music is wonderful, something everyone should experience at least once.  It’s not only skillful and infused with incredible energy, but shot through with hope and belief—or at least the burning, tempest-laden desire to believe, to hope.  Out of many highlights this year was the song featuring the lead male singer of the DuPage African Methodist Episcopal (AME) choir.  “Speak.  Speak,” he intoned, the choir echoing the word behind him.  I felt immediately the power of the image of God speaking, and the world being created thereby.  “Whatever it is.  Speak.  Speak.  Speak it to the atmosphere.  Speak it to the atmosphere.”  A burning desire to believe that someone will hear, that some saving, creative thing will come into being.