Filipinos in the Land of the Hyper-Real 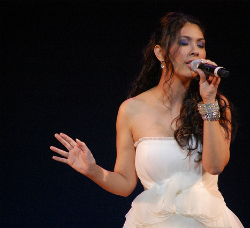 Note: The following is part of a talk delivered at the Critical Mixed Race Studies Conference, DePaul University, November 2014.

It may be my favorite piece of music ever on TV.  Below, watch a VIDEO of the “Filipino Concert King and Queen,” Pops Fernandez and her then-husband Martin Nievera, singing “Beauty and the Beast.”  It’s schmaltzy—especially when they start rotating—but I love it as only a Filipino can.  For one thing, the two were never so beautiful as in this moment sometime in the mid-90’s, I believe.  But they are also a prime example of what anthropologist Arjun Appadurai calls the “global culture of the hyperreal.”

In Modernity at Large, one of the most important books on globalization, Appadurai remarks on the “uncanny Philippine affinity for American popular music,” calling our renderings of the music “hypercompetent reproduction.”  In other words, we do Western music better than most Westerners.  To wit, the following examples, the first two mediated through Oprah, another Filipino passion:

♦  Pops and Martin doing Celine and Peabo (It’s BELOW)

By now Arnel Pineda’s story—a poor, at times homeless Filipino boy replacing Steve Perry as lead singer of Journey—has become almost mythic.  In one interview he gasps, “Why did they chose me? I’m so ASIAN!”  But there’s no denying he’s hypercompetent.  In the Charise clip, besides the shock of seeing Oprah’s size next to Charise’s at the end, my favorite moment is watching David Foster—aka The Hit Man, for the loads of pop hits he’s written or produced.  He’s playing piano for Charise and barely in focus in the background, but when Charise hits the big high note and the audience goes crazy, the smile that crosses his face is as priceless as it is paternal.  (Charise grew up poor, too, but was never homeless.)  And finally I’ve always loved—and cringed—at the people introducing Pops and Martin: the seamless flow between Tagalog and English (is there a word as good as “Spanglish” for it?), the over-enthusiasm, the thoroughly American-showbiz “Yeah!” 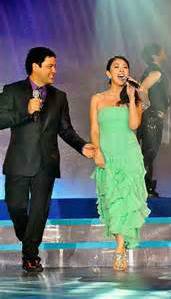 I have written elsewhere (see the first link below) that the first Philippine political party, the Partido Federalista, had as one of its major planks eventual annexation to the U.S.  And, in general, U.S.-Philippine relations seemed so “natural,” that Americans commonly referred to us as their “little brown brothers.”  What Appaurai sees is a paradox: “…the American missionization and political rape of the Philippines” resulting in “a nation of make-believe Americans, who tolerated for so long a leading lady who played piano while the slums of Manila expanded and decayed.”

As for “Beauty and the Beast,” you can check out Celine Dion and Peabo Bryson’s Live AMA version Here.   At a recent conference, after I showed Pops and Martin doing the song and said, “Eat your hearts out, you Westerners,” I heard a young black woman sitting in back whisper, “Well, I don’t know.  I mean Peabo Bryson.  Peabo!”  And of course he is good.  But Celine and Peabo—hyper-fantasized as they are—aren’t nearly as hyper-real.

Pops and Martin symbolize a central feature of Philippine culture, as does this classic joke.  A Filipino takes an American out to a restaurant to feast on iconic Filipino food.  They have the national meat dish (adobo), the national noodle dish (pancit), the national vegetable dish (pinagkbet), and even a helping of diniguan—what I grew up calling “chocolate meat,” or meat in blood sauce.  “So,” says the Filipino, “you want to try the national drink?”  “Of course!” says the American, enthused over all the native dishes and looking forward to the native drink.  Punch line: the waiter brings out Coca Colas.

♦  For more on Philippine culture, though from a widely different angle, go to my essay on NVM Gonzalez, an essay on his valiant efforts to find something less Western at the heart of Philippine culture.  Also read about “The White Man’s Burden,” Kipling’s famous poem that was written to encourage Americans in their takeover of the Philippines.  And for a little Filipino radicalism in the U.S.—and my family’s involvement in it—read about the International Hotel.  Go HERE for a complete list of writings on the Philippines.

♦  Go to the lead post on the “Third World,” or to the Teaching Diversity main page.