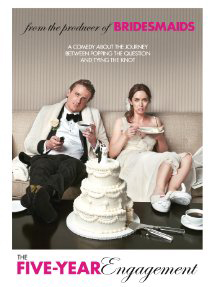 In The Five-Year Engagement Tom (Jason Segel) and Violet (Emily Blunt) have put off their marriage for career reasons, broken up, gotten involved with others, but finally give in to what seems an inevitable love.  In one of the movie’s final scenes Violet drags Tom past a series of wedding choices as they run towards a San Francisco bower where they will finally do the deed outdoors.  She runs him past a caterer who’s set out samples of two main dishes. “This one or that?!” she demands.  He chooses.  A baker with two wedding cakes—this or that?  He chooses.  Two kinds of bands—this kind of music or that?  It’s a clever scene, but almost too cute, and Jason Segel, making one rapid-fire choice after another, has a dopey, gee-whiz smile on his face that’s not quite convincing.  His strength as an actor, a kind of affable sincerity, has played very well up till now, as it did in Forgetting Sarah Marshall, but he doesn’t quite have what it takes to go all out in a mad-cap ending.

Judd Apatow and his talented cadre of actors and writers—Jason Segel, Seth Rogan, Jonah Hill, Joseph Gordon-Levitt—have defined the comedy genre of our age, the Slacker Comedy, and many other actors, like Ben Stiller and Steve Carrel, are all too glad to ride one of the biggest waves in Hollywood history.  The Apatow brand focuses on males.  It ingeniously shows us man-boys not wanting to grow up, wanting to stay in the frat house or online or in other infantile pursuits forever, but finally, miraculously, making that leap into a kind of adulthood, as the Seth Rogan characters did in Knocked Up or Zack and Miri Make a Porno, for example.  Finally, slackers usually embrace old truths about love and responsibility and the movies end up comfortable and moral and really serious about relationships.

In The Five-Year Engagement, Jason Segel takes the Apatow brand one step further by finally creating an Apatow female lead truly equal to the male lead.  Furthermore, Tom and Violet aren’t slackers: they’re serious about careers. What I miss, as some others have, is the zing of the dialogue, the feisty, witty repartee between male and female leads of old that seemed to more truly signify a dynamic equality.  Think Tracy-Hepburn.  Or take this exchange, the first between Joel McCrea and Veronica Lake in Preston Sturges’ classic Sullivan’s Travels.

Sullivan (McCrea), pretending to be a hobo stops into a cheap diner, asking only for a cup of coffee and a donut (a “sinker”).  Veronica Lake hangs in the background until she says to the counter man:

“Give him some ham and eggs.”
“That’s very kind of you, sister, but I’m not hungry. Cup of coffee and a sinker’ll fit me up fine.”
“Don’t be a sucker.”  [To the counter man again:]  “Give him some ham and eggs.”  [To McCrea:] “Way I’m fixed 35 cents ain’t gonna make any difference.”
“Things a little tough, huh?”
“I wouldn’t be sitting in an Ol’ Wagon for local color…They locked me out of my room.”
“That’s too bad. Well, things are tough everywhere. War in Europe, strikes over here. There’s no work, there’s no food…”
“Drink your coffee while it’s still hot.”
“What’d they lock you out of your room for?”
“Did I ask you any questions?”
“Well, sorry.  Been in Hollywood long?”
“Long enough.”
“Trying to crash the movies or something?”
“Something like that.”
“I guess that’s pretty hard.”
“I guess so.  I never got close enough to find out.”
“Sorry.”
“Hey, who’s being sorry for who? Am I buying you the eggs or are you buying the eggs for me?”

Like that.  All delivered rapid-fire, yet with droll non-chalance. In comparison, the exchanges in The Five-Year Engagement are slow, deliberate, and very serious.  Emily Blunt—a good actress headed towards greatness, maybe—isn’t Hepburn or Veronica Lake yet, and anyway sharp wit flying back and forth between male and female doesn’t seem in the cards for movies these days, perhaps with signal exceptions, like in moments of Up in the Air.  Wit is more the province of men, while women do earnest pleading of one kind or another.

There are so many reasons for this, but the one I want to focus on now has to do with being suckers.  “Never give a sucker an even break,” W.C. Fields famously said, but this supposes that you can spot a sucker and—most important—that you’re not one yourself.  But these days we all feel like suckers.  Politicians make suckers out of us, certainly, but so do our marriages, and our jobs, and our educations, maybe especially our belief in happy endings.  Economic downturn, environmental degradation, political gridlock…personal gridlock. How’s all this going to turn out?  When you’re so unsure about happy endings, it’s hard to go all out for zany ones.  It’s not just that Jason Segel isn’t Jimmy Stewart, it’s also that for all the disaster and despair Jimmy Stewart’s generation lived through, it still—on the whole—believed.  That belief gave it freedom.  It’s belief in men and women—including a belief that women were, or someday would surely be, equal—created enough space to take more chances on real, male-female wit than we see today.

Apatow’s brand isn’t so free.  In an age of unbelief, the age of the sucker, it seems to have willingly taken on a significant burden.  Anything outrageous must be redeemed by a plea. BELIEVE, the brand seems to say.   At least for the moment it gives me hope that, given the way Apatow & Company command the box office, we still seem hungry for the encouragement, still fight through the cliches and root for a love like Tom and Violet’s.  Is the brand making suckers out of us?  Will it really all work out?  In another Apatow syndicate hit movie, when Kyle (Seth Rogan) finds out Adam (Joseph Gordon-Levitt) has cancer, he says to him: “Hey, it’s not that bad. You’ve got at least a 50/50 chance.”