Frank Lloyd Wright: The Idea of a Temple

The Imperial Hotel (Tokyo), The Guggenheim Museum (New York), Wingspread and the Johnson Wax Administrative Building (Racine, WI), Robie House (Chicago), Taliesen and Taliensen West (Spring Green, WI, and Scottsdale, AZ), Falling Water (Mill Run, PA)—the list of important buildings goes on and on and on for Frank Lloyd Wright (1869-1959), America’s greatest architect.  Born in Richland Center, Wisconsin, his work in Chicago with Louis Sullivan (whom he referred to as his “Dear Master”) and his Prairie Style marked his first radical innovations in both the structural methods and the aesthetics of modern architecture.  He never stopped innovating.

His writing style wasn’t as innovative, a throwback, almost, to 19th century intellectual prose which was often florid and handled literary decoration poorly.  Nonetheless, I included Frank Lloyd Wright in Smokestacks and Skyscrapers: An Anthology of Chicago Writing not only because of his close ties to Chicago, but also because he so often managed to transcend his writing style through sheer audacity.  I included an excerpt from his autobiography which recounted the building of another landmark: Unity Temple in Oak Park. “I cannot see the ancient institutional form of any church,” he wrote, “as anything but sentimental survival for burial.” 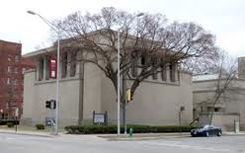 To the building committee he says, “Let us abolish, in the art and craft of architecture, literature in any symbolic form whatsoever.  The sense of inner rhythm deep planted in human sensibility lives far above all other considerations in art.  Then why the steeple of the little white church?  Why point to heaven?”  So Unity Temple didn’t.  Its windows were set so high that on the outside it looked windowless, almost fortress-like with the massive, concrete facade it presented on its street side.  Inside, however, it glowed with the warmth of a Frank Lloyd Wright buidling, many people calling it his perfect “jewel box.”  His high windows, as he wrote, “flooded” the  side 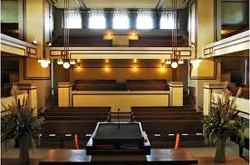 alcoves “with light from above to get a sense of a happy cloudless day into the room.”  “The Temple as a forum and good-time place…yes.  As a religious edifice raised in the sense of the old ritual?  No,”  he contended, and so the struggle between Wright and his client began.  But Wright, as he often did, would prevail, and throughout this section of his autobiography one can see him deftly maneuvering spiritual concerns, new techniques of construction (here concrete slab), and ways of handling light together into one of his most beautiful articulations of the idea of organic architecture.

Frank Lloyd Wright also had strong opinions about Chicago culture.  In a 1918 article read to the Women’s Aid Organization, his love/hate relationship with Chicago burned brightly.  “Chicago is the national capital of the American spirit,” he would say, but he goes on to deride Chicago culture, calling it “dirt,” something merely “stuck on” to its grinding, materialistic inner core.  Yet in another place is says, “Eventually, I believe Chicago will be the only beautiful great city left in the world.”  It could be redeemed by real art.  He felt that art—architecture especially—could begin to transform that inner core so that it could become truly organic—that is, one with nature again, and flooded again with spiritual light.  “I believe in God,” he famously said, “only I spell it ‘Nature.'”

♦ Go to a list of Chicago Writers on this site.
♦ Read “Frank Lloyd Wright, Alice Walker, and the Necessity of Beauty”
♦ Watch the video “Come Together Wright Now”
♦ For FLLW and music, go to Did Frank Lloyd Wright Listen to Fats Waller?
♦ Go to Jim Nedza’s DesignSlinger blog on Chicago architecture
♦ Go to Don Gunning’s FLLW website
♦ Go to the Frank Lloyd Wright Trust’s website