Frank London Brown: Can White Folks Get It? 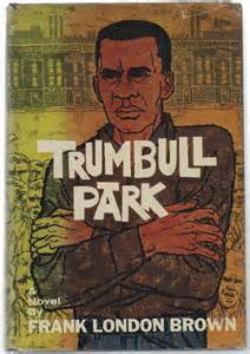 So well-received was Frank London Brown’s first novel Trumbull Park (1959), that critic Sterling Stuckey wrote: “…along with Lorraine Hansberry’s Raisin in the Sun and Ossie Davis’ Purlie Victorious, [it] signaled the advent of a new and brilliant flowering of creative effort on the part of Negro writers.”  Also praised by Stuckey as that rare combination of writer and activist, Brown had based Trumbull Park on his real-life experience of moving from Chicago’s South Side into the Trumbull Park housing project near Gary, partly as a show of solidarity with poor people.  In blunt, straightforward style he tells the all-too-familiar tale of a family who endures not just the harassment and “Get out, nigger!” taunting, but also stone after stone, bomb after bomb of the mobs and individuals trying to drive them away.  The novel exposed thousands of people to the degrading racism and living conditions of slums.  Unfortunately, the novel remains ultra-pertinent today.

Also unfortunately, his birth and death dates—1927 to 1962—show Brown, like Lorraine Hansberry, died terribly early.  His second novel The Mythmakers was published posthumously.  During his life he published many articles and stories in such periodicals as Downbeat, Ebony, the Chicago Tribune and Sun-Times, Negro Digest, and the Chicago Review.  Besides writing, he worked as a machinist and union organizer, and was director of the Union Leadership Program at the University of Chicago.  He enjoyed some fame as a jazz singer as well, appearing with Thelonius Monk not only in Chicago but also at New York’s legendary Five Spot.

Of all his work, however, the short story “McDougal” has received the most—nearly unanimous—high praise, and I included it in my book Black Writing from Chicago.  Here Frank London Brown’s gift for dialogue and precise, dramatic scene-setting reached its peak.  It also explored the possibilities that people could relate and empathize across the terrible racial boundaries he spent his short life not only writing about, but also trying to help everyone overcome in daily life.

“McDougal” brilliantly describes a moment in a jazz combo’s performance in just under 700 words, and the McDougal of the story’s title is, in fact, a white man—one whose musical authority comes from suffering, a suffering that bridges racial gaps as Frank London Brown believed shared suffering could.  Just before he takes his solo, two of his fellow musicians in the group talk about him.  The drummer, Jake, leans over his drums and whispers to pianist Percy R. Brookins, “That cat sure looks beat don’t he?”  His wife is pregnant again: number four.  Furthermore, as Brookins replies, “Man, that cat has suffered for that brown skin woman,” adding, “Do you know none of the white folks’ll rent to him now?”

“Why hell yes…will they rent to me?” retorts Little Jug, the bass player, but finally he says:  “…he knows the happenings…I mean about where we get it, you dig?  I mean like with Leola and those kids and Forty Seventh Street and those jive landlords, you dig?  The man’s been burnt, Percy.  Listen to that somitch—listen to him!”   As he solos, McDougal closes his eyes.  The story ends: “…he did not see the dark woman with the dark cotton suit that ballooned away from the great bulge of her stomach.  He didn’t see her ease into a chair at the back of the dark smoky room.  He didn’t see the smile on her face or the sweat upon her flat nose.”

♦  In 2020 Frank London Brown was inducted into the Chicago Literary Hall of Fame.  For an article on that, which focuses more on his novel Trumbull Park, go HERE.

♦  Go to the Black Writing from Chicago main page.

This entry was posted in Black Writers, Chicago Writing and tagged Black Writing from Chicago: In the World-Not of It?, cross-racial understanding, Frank London Brown, McDougal, Trumbull Park. Bookmark the permalink.