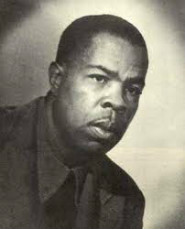 For most of his life Frank Marshall Davis (1905-1987) worked as a journalist for papers such as the Gary American, the Atlanta World, and the Chicago Star, a labor weekly he co-founded and served as executive editor.  Moving to Hawaii, he worked for the Honolulu Record and made the acquaintance of the young Barack Obama, an acquaintance that has led to lots of internet tripe and right-wing paranoia. He also wrote fiction and published a classic essay in the “My Most Humiliating Jim Crow Experience” series in Negro Digest in 1944.

Because of his anti-racist stands and his association with labor and the Communist Party, the FBI maintained a file on him from the mid-40’s to mid-60’s, and he was pressured by the House on Un-American Activities committee.

Through all this Davis also managed to produce a significant body of poetry.  “Rarely in African American literary history,” writes John Edgar Tidwell, “has one poet been made to serve the interests of two movements…”—meaning that Davis’ career held major significance for the so-called “Negro Renaissance” in the late-20’s and early 30’s, as well as the Black Arts Movement of the 60’s.  In addition to many uncollected poems, his poetry books include Black Man’s Verse (1935), I Am the American Negro (1937), 47th Street (1948), Jazz Interludes (1976), and Awakening and Other Poems (1978).  Black Man’s Verse begins with the classic lines: “Chicago is an overgrown woman / wearing her skyscrapers / like a necklace….”

In his foreword to 47th Street he writes:

“I am a Negro writer.

“A Negro is an individual who has been shunted aside for discriminatory treatment as an inferior because an ancestor is know to have been a dark African native.  That is the only possible definition of Negro on the basis of science and actuality. You see, Negroes do not belong to a distinct race because there is no such thing as a Negro or black race, just as there is no Caucasian or white race, and no Mongolian or yellow race.  The so-called black race has blue eyed blonds who are lighter than the swarthy brunettes classed as members of the alleged white race.  To call a blue eyed blonde a member of the black race is a monstrous absurdity to be expected only of the United States which boasts it has bigger and better everything, which automatically includes absurdities….

“American will have Negro writers until the whole concept of race is erased.”

Davis’ poetry is notable not only for its social engagement, especially in the fight against racism,  but also for its fluent, lyrical language and stunning imagery, and, though he produced many short lyrics, for its dedication to long-form poetry, often arranged as mini-dramas.  A monumental poem about a major Chicago Southside park, “Washington Park,” for example, begins famously with, “The heat roars / Like a tidal wave / Over Chicago’s Congo…,” and includes sketches of the Park’s inhabitants, from a homeless man to a Communist organizer.”

His series “Ebony Under Granite,” gave imagined, poetic post-mortems on a variety of Black people—including himself! “Frank Marshall Davis: Writer,” one of his poems I included in my book Black Writing from Chicago, begins:

“He is bitter
A bitter bitter cynic”
They said
“And his wine
He brews from wormwood.”

Yet even here, and in other lines of this poem of bitter protest, his beautiful lyricism peeps through: “From the ebony house of me I watched days swing into weeks,” “I turned to what was called my race…and I looked at a white man’s drama acted by inky performers,” “For when I wrote / I dipped my pen / In the crazy heart / Of mad America.”

This unique fusing of lyricism and protest is perhaps his greatest literary achievement. In some ways, he couldn’t help but “write pretty,” for he seemed to find beauty, sometimes even quiet reflectiveness, in the most glaring clashes. His poem “Four Glimpses of Night,” definitely in the style of the “Negro Renaissance,” showed this tendency very early:

Night’s brittle song, sliver-thin,
Shatters into a billion fragments
Of quiet shadows
At the blaring jazz
Of a morning sun.