The Freshman: All in the Family?

The Freshman is the one film I’d take to a desert island. It’s my favorite movie—though I know it’s not great—partly because it parodies one of my favorite great movies, The Godfather. Clark Kellogg (Matthew Broderick) goes to NYU as a film student and gets entangled with a mob-type family headed by one Carmine Sabatini. On first meeting him, he exhales a quiet “Jesus Christ!” because Sabatini is the spitting image of Don Vito Corleone in 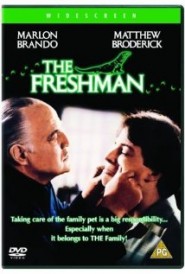 Coppola’s masterpiece. The joke, of course, is that Sabatini is played by Marlon Brando. Masterfully, Brandon then proceeds to send up his iconic Vito Corleone role. “Kellogg—just like the cereal,” he chuckles when his nephew Vinnie (brilliantly played by Bruno Kirby) introduces Clark to him. “How’d you like a nut?” Sabatini says to Kellogg, profferring a bowl of uncracked walnuts. Kellogg shakes his head. A few moments later, Sabatini insists that Kellogg say Yes to an unbelievably lucrative job offer. “I don’t see how I can refuse,” says Clark. “This is not a Yes,” Sabatini counters, taking several walnuts in his hand. “I want to hear Yes,” he says, punctuating the Yes by cracking the walnut shells to pieces with one scrunch of his powerful hand. When Clark forces out a very nervous, Yes, he activates a tractor beam pulling him irresistibly into “the family.”

The cringe of terror on Kellogg’s face is priceless. The whole film, though based on a typically flimsy caper plot—this one involving a Komodo dragon, other endangered species, and FBI agents on the take for a rival family, the Minelli’s—is loaded with small priceless moments like these, all perfectly acted, perfectly timed. Bert Parks does not only a wonderful send up of his signature Miss America song, but also sings Bob Dylan’s “Maggies Farm” with an insouciant irony Dylan himself might applaud. Maximilian Schell’s cameo as the deranged Larry London is a mini comic masterpiece, as is the acting of Paul Benedict, who plays Arthur Fleeber, a film professor so enamored of The Godfather he mouths every single word of dialogue as he shows it in class. Fleeber knows Sabatini by his underworld handle, so when Penelope Ann Miller interrupts his class demanding to see Clark and introducing herself as “Carmine Sabatini’s only daughter, Tina,” Fleeber bursts out, “Jimmy the Toucan?!” “Oh, no one calls him that anymore,” she replies coyly, cutely, then before leaving with Clark in tow, says to Fleeber, “My father thinks Clark is an A student.” “Oh, yes, he’s very good,” Fleeber flubbers. “An A student, that’s what my father says!” Tina asserts with a look that goes from flirty to menacing in a split second. Fleeber nods sheepishly.

For me, this whole review could just list tiny jewels like this, but let me have just one more, perhaps the most moving. Sabatini visits Clark in his dorm room, perhaps intending to give him a way out of his job, a job which—because it involves illegally importing endangered animals—has put Clark into several moral quandaries. They speak about Clark’s real father, killed in a motorcycle accident when Clark was six. “What line of business was he in?” Sabatini asks. He was a poet. Sabatini asks Clark if he can “tell him” one of his poems, and Clark recites this:

There’s a certain doorway
On Boylston Street
That I passed by on foot
Suited and shod
One of many each Tuesday
Towards lunch with a certain woman
Regarded each Tuesday
By the perfect turning gaze
Of a white persian, regarding me
Love bound, sped by desire
And returning to
The certainty of his fur.

I love this poem, and even more what follows. “The certainty of his fur,” Brando whispers, his fingers moving poetically in front of him as if he were gently ruffling a cat—as he does, of course, in the opening scene of The Godfather. “I like it very much, and I especially like that you remembered it.” A moment later, getting up to leave and surveying Clark’s room, he delivers perhaps the movie’s funniest line: “So this is college?” he mumbles. Then with a rough chuckle, “I didn’t miss nothin.'” But it’s the line “…and I especially like that you remembered it” that points to the movie’s deepest theme, family, a theme it handles not just comedically.

The movie begins with Clark’s uneasy relationship with his step-father, a step-father who will later betray him to the FBI agents/Minelli operatives. “If you were really my father,” Clark says near the end, “you would have treated me like a son.” Sabatini becomes Clark’s real father. Showing up in Clark’s dorm room, he says to his roommate, “I wanna talk to my son-in-law.” That’s because he and Vinnie and Tina have been bum rushing Clark into the family. At one point Sabatini kisses Clark full on the lips, the “bacci di tutti bacci,” the kiss of all kisses, parodying the moment in Godfather II when Michael Corleone (Al Pacino) does the same to his brother Freddo. But that scene, which Fleeber plays in class, is Michael’s epiphany of Freddo’s betrayal. “I knew it was you, Freddo. You broke my heart. You broke my heart,” Pacino whispers through clenched teeth, his hands locked around Freddo’s face. After Sabatini’s kiss of all kisses, Vinnie crosses himself and says, “You’re in for life now! It’s like we were brothers!” and, just movie moments later, Clark finds himself suddenly engaged to Tina. But a “betrayal” is coming.

Clark’s painful relationship to his step-dad aside, this rush to family is very, very funny. But it’s also a ruse. Vinnie had purposely picked Clark out to play a part in Sabatini’s elaborate scheme to get himself out of the endangered species biz, while also entrapping the FBI/Minelli guys. As Tina and Clark dance after the scheme finally acts itself out successfully, he asks her, “So…marriage?” She replies with a gently adult, knowing smile, shaking her head No. “But I’d like to get to know you better, maybe at the dorm,” she says. So there it is: the prospect of marriage turning into a one-night stand. There are hints—as Sabatini, Clark, and the Komodo dragon, walk away together towards a rising sun—that Clark might very reluctantly receive some of Sabatini’s help in the movie biz: like Vito Corleone gives “help” to his god son Johnny’s movie aspirations in The Godfather by making the movie producer Woltz an “offer he can’t refuse.”  But that’s all career stuff.  In many polls asking Americans about “My Favorite Ethnicity,” Italian often comes in first, largely because of the family image it projects and sustains through things like its mythical all-day Sunday dinners.  The Freshman keeps parodying till its last seconds, and it’s been so much fun that we hardly notice that it’s not just parodying The Godfather, but the concept of family itself.