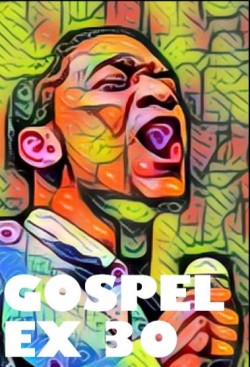 Below is a VIDEO of highlights from the 30th Anniversary Concert of The Gospel Extravaganza, an event I helped start at North Central College that many years ago.  A comment posted on the video I did for the 25th Extravaganza said every song ought to have been shot with a bigger camera, saved, and posted to I-Tunes, Facebook, and other places. “God bless you for doing this even once!” I think the person said.  But there aren’t any fine cameras here: just a few moments I captured on my cell phone and stitched together below.  I’ve said it before.  If you plug in speakers or headphones, you’ll catch about 25% of what the music was actually like (much less if you don’t plug in), but only 5% of the spirit of praise no matter what you plug into.

It’s one way of saying, we hope you join us live one day.

I say “highlights,” though I missed many of them, like Cassidy Campbell’s opening “Namaste,” and the instrumental interludes by the Tyvon Dukes band—actually my wife Linda’s favorite part of the evening—but I did catch a few.  Some moments of emcee Johnny “Blaze” Arrington’s great poetry and spoken word artistry, for example.  And towards the end there’s also some close-up shots, shots I was able to take because they invited me up on stage.  “I know he doesn’t like doing this, but we wouldn’t be here without him,” said Chaplain Eric Doolittle, whose leadership over the last few years has kept the Extravaganza going.

But the moment that gets the

longest shot in the video below is Phillip Armstrong leading the magnificent Cityside Singers in what to me was the song of the night, and one of the great gospel songs of the year: “Let Praises Rise From the Inside.”  Armstrong, with a great voice himself, took such evident delight in the voices of his friends.  He spoke the words “May you delight,” then raised his arms, his head back, eyes closed, as he bathed in the Cityside singers’ beautiful sung response.  They were singing in unison but moments later, when they broke into harmony, I almost put my phone down, stunned by the beauty of it all.  Luckily I kept filming.  Enjoy.  Then go back to…

♦  And for some history read “Father Mike Pfleger and Other Gospel Extravaganza Memories.”