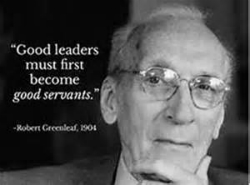 In his essay “The Servant as Leader”—a piece which launched the entire field of Servant Leadership studies—Robert Greenleaf tells of a two-day, off-the-record seminar attended by twelve ministers and theologians, and twelve psychiatrists of all faiths.  The theme: healing.

The chair person, a psychiatrist, opened with this:  “We are healers…Why are we in this business?”  After only a short, but intense discussion, everyone agreed that they were in it for their own healing.  “This is an interesting word, healing,” writes Greenleaf, “with its meaning ‘to make whole.’  The example above [of the seminar] suggests that one really never makes it.  It is always something sought.  Perhaps, as with the minister and doctor, the servant leader might also acknowledge that his own healing is his motivation.  There is something subtle communicated to one who is being served and led if, implicit in the compact between servant-leader and led, is the understanding that the search for wholeness is something they share.”

This was certainly true for my family when, to honor the life of my youngest son Bryan, my oldest son Rick and his wife Desiree founded Emmanuel House after Bryan died in 2006, shortly after his 21st birthday. *

And it was true for Lois Durso (then Lois Sadigh), a student in my Leadership for Social Change class, when for her class project she took on the trucking industry, laying the groundwork for pushing it to install side safety guards to prevent cars from rolling under big semis and being crushed.  Her 26-year-old daughter, Roya, and her fiance had suffered that fate.

CBS 2 Investigators took up the cause, as reported in the VIDEO below.  Now you see many, many trucks—not all yet—with those under-ride side barriers, and Lois and others whose loved ones had suffered similar tragedies played a significant part in putting them there.

*  Ten years later Emmanuel House was named one of the “Top 100 Most Innovative” social change organizations in the world.  It started as Bryan House, serving 5 families. As Emmanuel House it served 25. Then in 2018 it merged with long-time partner The Joseph Corporation to create The Neighbor Project, which will be serving well over 3000 families in the near future.)

♦ This article is part of a series on Greenleaf’s The Servant as Leader.  After watching the video below go to the series’ Lead Post.

One Response to Grief and Social Change