Grow Up and Honor Those Who Couldn’t 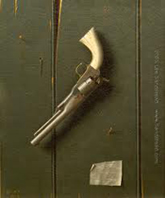 In the wake of the Sandy Hook Elementary shootings, I, like so many Americans, have been following as many conversations as I could about violence and gun control, the trauma of a community and the tragedy of young lives lost. Calls to reinstate the ban on assault weapons seem imminently rational. At a deeper level, so do calls to face up to our violent past and present.

Today, the U.S. buys and sells more weaponry globally than the rest of the world combined, and the NRA is as involved in stopping any reasonable gun control world-wide as it is in any reasonable control at home. Our past, too, is more deeply saturated with the mythology of guns than any other culture I can think of—so much so that at first even I instinctually responded very favorably, as did millions of Americans, to the NRA’s calls to arm every school. Actual thinking came second, or third, or fourth down the line.

As Chicago Tribune critic Christopher Knight reported the day after Christmas, the Wadsworth Atheneum Museum of Arts, the nation’s first public art museum, and Colt Manufacturing Co., America’s most famous handgun maker—it produced the first multi-shot pistol—were both founded in Hartford, Connecticut. Ironically, that’s just 50 miles from Newtown. Several exhibits, and two remarkable paintings—Harnett’s “The Faithful Colt” (see the picture above) and Brownell’s “The Charter Oak,”—tell a tale, says Knight, “…of how guns have been woven deep into the national ethos…one that unites liberty with guns.”

That brings me to one of the things that has kept resonating with me as I follow the conversations and read about such profound links, as between the Wadsworth museum and Colt Manufacturing. Both were founded in Hartford in the 1840’s, just 170 years ago. That may seem like a long time, but it isn’t if measured against the life of several of the earth’s great civilizations. Some years ago at a literary conference where issues of America’s love of guns somehow came up, someone from one of those civilizations said to me, “You have to remember, Richard, how very young the U.S. is. One day it will grow up.”

In 2000 at Dover Castle in England I took a picture of a plaque which read, “This wall built c. 1181.” I thought then how much different that was from the time I was walking in San Francisco in 1972 and saw a sign on a building under construction reading: “A San Francisco landmark since 1976.” And 1181 is even young compared to other walls I’ve seen in England, or India, or other places.

We need more time to grow up. I think that’s true. But Sandy Hook makes the prospect of one, or two, or three more centuries of this kind of violence feel absolutely intolerable. So I think instead that it’s also true that in life things come along to make you grow up fast. If the killings at Sandy Hook and the NRA’s response aren’t some of those things, I don’t know what is. So many children didn’t get to grow up. One of the best tributes our culture could pay them is to grow up more itself, and do that more quickly.

One Response to Grow Up and Honor Those Who Couldn’t