Guzman for Aurora: More. Together.

Note:  On April 4th, 2017, Rick Guzman lost the mayor’s race by a razor thin margin.  Go HERE for my first reflection on that event.  We are proud of this political novice who, given no chance in the beginning, came from last place, outlasted political veterans with decades of name recognition, and nearly became Aurora’s 58th mayor.

Rick Guzman, my eldest son, is running for Mayor of Aurora, Illinois, the state’s second largest city.  Go to the GUZMAN FOR AURORA website for more, and click on the large picture below to be taken to a short VIDEO. In 80 seconds, many prominent Aurora leaders make a persuasive case for why he deserves your vote.  As of this update, the video has over 20,000 views.  In addition to the leaders you’ll see in the video, Guzman has also gained the endorsements of Senator Dick Durbin, Congressman Bill Foster, Labor, and the Daily Herald.  Here are just three reasons why so many believe he’s by far the best choice to be Aurora’s next mayor.

♦  Development Money.  Rick Guzman has brought more development money to Aurora in the last five years (over $70 million) than all other candidates combined have brought in the last dozen. Read about the millions brought in for the Aurora Arts Center and St. Charles Hospital.

♦  People Out of Poverty.  He’s helped dozens of families move out of poverty through co-founding Emmanuel House.  In 2016 Emmanuel House was named one of the “Top 100 Most Innovative” social change organizations in the world, and Rick was recognized as one of “the brightest minds and boldest leaders solving problems through innovation.”

♦♦♦  Go to a Biographical Sketch of Rick Guzman and get more links to articles and videos about his candidacy, including how he’s using the Arts for Economic Revitalization. 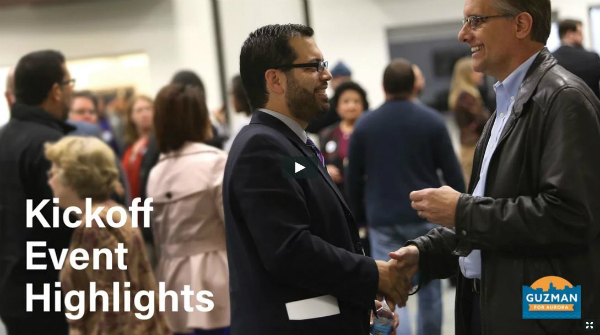 This entry was posted in Family, Social Change and tagged Guzman for Aurora, Rick Guzman. Bookmark the permalink.